Yesterday afternoon’s Prom brought the first performance of Dark Hedges, by the Northern Irish composer Elaine Agnew. It was given by the combined forces of the Ulster Youth Orchestra of Northern Island and the Ulster Orchestra, conducted by JoAnna Falletta, with a solo flute part played by housewives’ favourite, James Galway. Before speaking of the piece itself, it’s worth highlighting the performance, which demonstrated in startlingly vivid fashion the skill and musicianship that young players bring to new music; their playing throughout was deeply impressive. 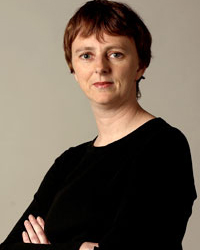 As a composition, though, Dark Hedges didn’t prove so convincing. Agnew’s inspiration is the avenue of twisted, interlocking beech trees in County Antrim from which the work takes its title. The piece goes some way to tapping into such evocative imagery, beginning with the mysterious juxtaposition of tam-tam, muted brass and glances of metallic percussion. Agnew dispels this with a wallop, promptly setting the piece off on its vigorous main trajectory, led by repetitive brass figures and characterised by gnarled melodic shapes. So far, so good; yet it doesn’t take long before the percussion—clearly Agnew’s instrumental focus—starts to feel, first, heavy-handed, then, downright intrusive. Barely a moment of music can escape their endless reports, giving everything a brutally hard edge, like colouring round the outline of subtle shades with a thick black marker pen.

The work is allowed more breathing space in the central section, drawing on the legend of the ‘Grey Lady’, a wraith-like figure that supposedly haunts the Dark Hedges. This is where the flute solo enters, cadenza-like, the breadth of its melodic material contrasting sharply with what went before. Agnew adds an effective harp underlay, and gradually allows in some peripheral percussion (chiming like an old grandfather clock). But they soon intrude once again, breaking up the soloist’s material, and while the flexatone episode that concludes the section is interesting, it doesn’t quite shake off the connotations of too many B-movie soundtracks. The work’s final section returns to the temperament and some of the material from the first, finally homing in on a cheerful melody that is again splattered by the kitchen department, as well as sounding rather too tongue-in-cheek to sit comfortably with the preceding music. Furthermore, the flute is swiftly rendered more-or-less redundant, leaving the impression that the solo part is little more than a bolt-on. The vast final crescendo-crash sets the seal on a work that has some subtle moments, but is ultimately undermined by the claustrophobic weight of the percussion. It’s not so much an exploration of the Dark Hedges than a rampage through them, replete with bovver boots and aerosol cans.