Last Night, almost two months after it began, the 2012 Proms season closed with its traditional cross between a concert and a piss-up. A relatively new addition to its arcane traditions is beginning proceedings with the première of a new work, and this year the mantle fell to Mark Simpson. One can hardly relish his task, composing something to kick-start what’s effectively a party, but his chosen title, sparks, suggested Simpson had sized up the context pretty well. It was given its first performance by the BBC Symphony Orchestra conducted by Jiří Bělohlávek. 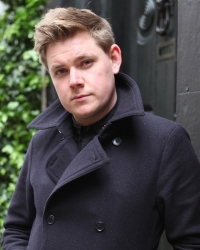 If that title suggests three minutes of frivolous texture music, sparks proved decidedly otherwise, Simpson cramming an impressive amount of substance into its diminutive duration. Like a number of the new works at this year’s Proms, it doesn’t start out terribly promisingly, high twizzles in the strings punctuated with metallic strikes – it’s an opening we’ve heard many, many times before. Yet Simpson almost immediately renders it a red herring, gruffly handing over to an aggressive brass outburst, which is also nullified but seems to get its teeth into the subsequent phrase too. All of this, though, has been something of an introduction; radiant chords form the centre of sparks, a progression literally surrounded by busy layers of orchestral froth, later flecked with brass flutterings and the distant noise of low percussion. The last portion of the piece moves outward, deep bass drones underpinning lines that swirl progressively upward, and there are some nicely intricate moments here when the texture seems to get so crowded that it’s not really possible to appreciate precisely what one’s hearing. Both in terms of its sound and its apparent symmetry, the work’s closing material—high register mayhem caused to fade out by a tam-tam clatter—returns to hackneyed territory; yet it turns out to be a second red herring, Simpson actually ending sparks with an inscrutable triadic throb and a soft thud. It’s a strange piece in some ways, and while i’ve given Mark Simpson the benefit of the doubt in terms of what seem to me “red herrings”, he’s clearly achieved with sparks what neither Peter Maxwell Davies nor Jonathan Dove could do in the previous two years: come up with a pithy, telling miniature that’s able to embrace both the seriousness and the merriment of the occasion; bemusing and entertaining—what better way to begin the Last Night of the Proms?

It’s nice, for a change, to end this annual series of articles on a positive note, but the 2012 Proms has been, i think, a more fascinating and wide-ranging selection of new works than we’ve heard in previous years (however, the dearth of electroacoustic music continues to be an embarrassing and ridiculous omission). For the time being, though, i’ll save my summary for a brief retrospective in a couple of weeks’ time, together with an examination of the results of this year’s polls. Thanks to all of you who’ve commented and placed your votes for this year’s Proms premières; i’ll keep the polls open for another fortnight, so if you haven’t yet voted for any of this year’s pieces, head over to the Polls page.