Tōru Takemitsu – From me flows what you call time (UK Première) 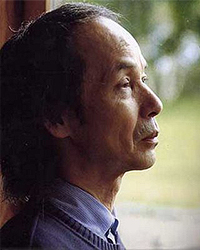 It was on this day, in 1930, that one of my favourite composers, the great Tōru Takemitsu, was born. So to mark what would have been his 82nd birthday, here’s one of his most spectacular orchestral works, the wonderfully-named From me flows what you call time. The title is taken from a poem by the Japanese poet Makoto Ooka, titled “Clear Blue Water”:

Summer trip to Switzerland:
in our bellies, sausages
eaten on the Zermatt terrace,
foot of the Matterhorn,
slowly turns into
heat: 1000 calories each.

As we climb up and up
the Furka Pass, my eyes
suddenly are perforated
by a billion particles
of heavenly blue:
across the valley a giant
mountain rampart:
The Glacier.

“From me
flows
what you
call Time.”

Down from that colossal
mass of shining ice
flows the majestic
River Rhone.

The piece is in part inspired by the Tibetan idea of the wind horse, an allegorical conception of the human soul, familiar to many in the well-known associated sequence of five coloured flags, representative of the elements: fire (red), water (blue), earth (yellow), sky (white) and wind (green). Takemitsu makes the number five significant; the work’s principal theme is essentially a five-note motif, and in addition to the orchestra he writes for a five-piece percussion ensemble. Percussion, in fact, dominates the piece, decked out with a plethora of exotic bells, chimes, gongs, singing bowls and drums to the point that it could almost be described as a percussion concerto. Nonetheless, though, the 30-minute work displays Takemitsu’s typically fine instrumental homogeneity, every instrument seemingly directed towards a common objective, albeit an objective that is often both nebulous and fluid. Takemitsu’s penchant for strolling around gardens when contemplating new compositions makes itself felt as much in this piece as in so many of his others, moving to and between a large number of ‘scenes’ or ‘vistas’, moments when his exquisite textural vagueness abruptly coalesces into something tangible. Takemitsu brings together in this piece two seemingly incongruous worlds, one highly sensual, the other solemn and ritualistic, somehow allowing each to reinforce and heighten the other. By keeping the principal material motivic in nature—the main theme is used as an idée fixe, and a second idea is similarly succinct—there’s a continual sense of unity and development, which is no small achievement considering how much stasis there is in this piece. Takemitsu allows long stretches of time to elapse with only an occasional chime or a deep and distant drone to indicate the piece is continuing, moments of repose that then contrast sharply with the predominately percussive episodes that they surround. The orchestra’s involvement is occasional and for the most part reflective, but this only serves to heighten the power of their contributions; the strings, in particular, are radiant in their simplicity, while the woodwinds and brass frequently evoke a kind of warm lushness gently reminiscent of Debussy. But as i’ve said, From me flows what you call time is centred around percussion, and barely a moment goes by without a mote of bell glitter glinting from somewhere (a long central episode for log drums—curiously labelled “The Promised Land” in the score—is the one exception).

This performance of the UK première took place at the Proms on 15 August 1993, by the BBC Symphony Orchestra conducted by Andrew Davis. They were joined by the percussion group Nexus, who also performed in the world première of the work three years earlier (it was commissioned by New York’s Carnegie Hall as part of their 1990 centennial celebrations). It was broadcast on television, and something i shall never forget is the conclusion of the work, where bells suspended high up in the roof of the Royal Albert Hall were played by Nexus, pulling on long, brightly coloured ribbons. Regardless of the lack of visuals, From me flows what you call time remains one of the most beautiful and evocative pieces of music ever composed, and on this anniversary of Takemitsu’s birth, continues to do him proud.

What a lovely tribute to a beautiful composer.