Due to various compositional projects, i’ve not been able to give 5:4 much focus in the last few weeks, but now that i have some breathing space, it’s time to catch up on the more interesting recent premières and new releases. 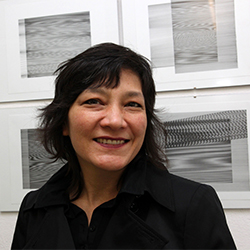 As well as being interesting, one of the most unlikely premières took place as part of Glasgow’s marvellously leftfield Tectonics festival. Born in Canada, based in Berlin, Chiyoko Szlavnics‘ music is heard extremely rarely in the UK, and i suspect this is more than a little in part due to the nature of her mode of expression. Szlavnics begins each composition with a drawing; they tend to combine aspects that would seem at home in technical drawings—grids, charts, measurements—alongside elements that are more fluid and improvisational (examples can be seen on her website). The drawing is then ‘translated’ into sound, pitches and durations being derived from the way the drawing presents itself on the page. The result is material composed for the most part of slithering individual lines, each moving slowly, sliding up and down, sometimes hovering, over long periods of time. It makes for an aloof, bald aesthetic, sufficiently challenging that it is hardly surprising (although disappointing) that her work isn’t featured in British concerts more often.

The challenges extend to performers. Szlavnics’ approach to harmony favours just intonation, and to that end her instrumental parts are peppered with detailed instructions to the players concerning how many cents flat or sharp their notes are from their equally tempered cousins. A few years ago, with my ensemble Interrobang, we presented the first UK performance of Szlavnics’ large-scale work (a)long lines; we’ll draw our own lines. By far the most taxing part of the performance—occupying no small amount of rehearsal time—was accurately securing these hitherto unfamiliar pitches, particularly as Szlavnics regularly martials her glissandi towards specific chords, which in order to resonate as they should demand absolute certainty of intonation. Furthermore, her scores do not employ conventions of rhythm; instead, players start and stop according to time indications given in the music (necessitating that each player has their own timer—although for our performance we substituted an iPad counting time in place of a conductor). In addition to these aspects, the majority of Szlavnics’ music—and indeed one of its defining features—includes sine waves, which interact with the instrumental parts, by turns clarifying and complicating the harmonic language.

So for performer and listener alike, Szlavnics’ work is something of a daunting prospect. Yet its unique combination of elements more often than not results in music of hypnotic and discombobulating power. The coupling of glissandi and just intonation runs rings around our expectations; pitches continue sliding more or less than we anticipate, or remain obtusely static, unmoving and unmoved. Chords jar within themselves and against our innate impulse to hear “well tempered” intervals. There are occasions—and curiously, this seems to be the case more with her shorter works—when their phlegmatic demeanour becomes maddeningly obtuse—or just plain maddening. But more often than not, in works such as Gradients of Detail, Heliotrope and the sublime three-part Reservoir, they tap into something lofty and mysterious, a complex of familiar and alien sounds that attain an oblique kind of timorous and decidedly tentative tranquillity.

However, Szlavnics’ new work Materia/Immateria, given its first performance at the Tectonics festival, displays far less evidence of this sort of sonic vulnerability. For all its endemic uncertainty, her music generally avoids sounding sinister; but Materia/Immateria is downright threatening, the sliding lines full of pent-up tension, redolent of early Penderecki. This quality somehow comes across despite the fact that the harmonic language seems more clear, as though Szlavnics was actively seeking to reinforce rich consonances that hint more strongly than before at a ‘tonality’ somewhere out of reach. But it’s the air of menace that pervades strongest, aided by moments when clustered chords burst out of nowhere, disappearing just as quickly. This is a distinct departure from the smooth perception of processes methodically working themselves out that typifies her previous work. Hearing the influence of a potent unseen force—an éminence grise, a deus ex machina, call it what you will—in a context such as this is deeply troubling and demonstrates a new way of thwarting one’s expectations. In many of Szlavnics’ pieces the interrelationships between the instruments—despite occasions of coincidence and resonance—remain opaque and ambiguous, but in Materia/Immateria it seems crystal clear: the orchestra, and the sine waves, are integral elements in a large, multi-faceted organism; and when, as happens halfway through, those elements coalesce into a huge, surging mass—hardly-moving apart from dynamically, growing in scale rather than scope—the result is a fascinating confusion, the undertones of aggression and consonance asserting themselves yet never cancelling each other out.

Materia/Immateria is a more immediate experience than Szlavnics’ previous work, in the sense that the work’s relationship with drama is more strongly externalised. Yet equally its music remains an impressive challenge, as beautifully and defiantly indifferent as ever; despite its surface-level excitement one’s left with a uncanny aftertaste that is distinctly unsettling.

The world première of Materia/Immateria was given by the BBC Scottish Symphony Orchestra conducted by the Tectonics festival’s grand master, Ilan Volkov.