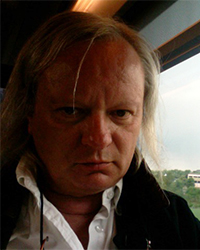 A recent new work permeated by the subject of death is Trauermärsche for chamber orchestra, by French composer Philippe Manoury. By tapping into the funeral march idea, Manoury sought to engage with what he has described as its dual character, “at the same time something tragic but also something derisory … and macabre”, elaborating how the use of the plural in the title—literally ‘Funeral Marches’—is “because it will be like several funeral marches mixed together so one can imagine that there are several orchestras, one appearing when another disappears, and then the first one comes back, etc.” Although he cites influences from both Mahler (the famous ‘Frere Jacques’ music in the third movement of his Symphony No. 1) and Webern, the music of Trauermärsche is most concerned with alluding to practices of processional, with the funereal processions of New Orleans especially in mind.

One of the work’s chief ideas is articulated via heavily accented muted piano notes, a rising 6th, invariably associated with dull bass drum thuds and clanging tubular bells; this recurring material establishes a sluggish, irregular pulse, the basis for the work’s deadweight momentum. The woodwinds are concerned with mournful lines that present a strong sense of descent, almost as though their melodic lines were sagging under their own weight or an external gravitational force. The strings shiver and tremble, later making stabbing gestures that cause the winds to respond with hard chords, immediately suggesting a different influence: Varèse. This moment of collision, the respective ideas meeting and interacting, is answered by repose and then rude outbursts, a cue for the brass to begin, ominous short phrases over restless suspended cymbal rolls. A brief hiatus, a restart, a sudden abrupt fanfaric sequence from the brass and what sounds like a chamber organ in duet with the winds leads to the work’s decidedly strange and unsettling conclusion. Some might deem Trauermärsche to be all mood and somewhat little substance, but i find both its restraint and the whole atmosphere Manoury creates to be utterly compelling—solemn, sullen, but compelling.

The world première, given at this year’s Witten New Music Days by the WDR Symphony Orchestra conducted by Peter Rundel.