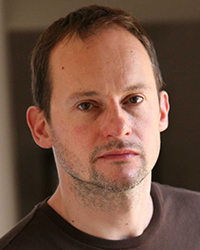 For Remembrance Day, i’ve chosen a new work from David Sawer that engages with death and loss in a poignant but surprisingly passionate way. Flesh and Blood is a 25-minute dramatic scena for mezzo-soprano, baritone and orchestra, setting a text by playwright Howard Barker. Although not staged, the soloists do wear costumes and assume the roles of a soldier and his mother, the two of them exploring aspects of memory and resignation in the face of the Soldier’s imminent, permanent, separation and loss. That’s one way of looking at it, although the nature of the situation is nicely enigmatic; parts of the piece could just as well be taking place in absentia, within the Mother’s imagination, either in the wake of the news no parent wants to hear or with understandable dread at its fatalistic inevitability.

Sawer describes the piece as a ritual, and to this end he divides the orchestra into functional units, the strings associated closest with the Mother, the wind and brass with her son. Both express themselves with emotions that are decidedly mixed; the Soldier speaks of the swift comfort of his uniform (“Immediately the tunic fitted”) yet immediately feels it pulling him on and away (“But more than fitting / It clung … I watched my childhood run away from me”). The Mother’s opening reaction to the same is ambiguous, a fractured melisma of sounds in equal parts surprise, sighs and sobs; the ostensible clarification (“Beautiful is my son … his uniform becomes him”) is qualified by a doleful tone in the orchestra, the pizzicato phrases that surround her cascading downwards. Sawer gives the son more stalwart music, the brass adopting the forced semblance of a stiff upper lip, haughty and boisterous.

Their dialogue is initially hard-edged, scratchy, but Sawer gradually allows into the work increasing amounts of lyricism. Despite bellicose manoeuvres from the brass (mirroring the military, they have but a single, basic attitude), the Mother suddenly launches into an extended nostalgic episode, reducing the piece to a sentimental drift, remembering her son as a child (“how quiet you were … standing in the kitchen doorway like a sentry”), the tender reverie of her memories achingly disrupted in a repeated heartfelt plea of “don’t go”. Sawer lets the mezzo-soprano take the lead here, but the strings that swarm around match her every movement, and as she grows increasingly fraught they let rip at full strength, eliciting a similar response from the brass and percussion. From here the tone becomes more complex, encompassing extremes of emotion, the Mother desperately suggesting her son deserts, which she will cover-up:

My flesh and blood I’ll lie for you
And if they ask me with stone faces
Where is he your boy?
I’ll say stone faced myself
I do not know, I do not know

The son brushes her suggestions aside, but barely-suppressed anger and resentment bubble just below the surface in both parts throughout this section, occasionally flaring up in furious bursts of fanfaric vitriol. The baritone ushers them both into a gentle soundscape infused with celesta, his turn to indulge in wistfulness; the brass—his familiar up until this point—now almost seem to turn on him, bludgeoning his words, and his mother emerges crying out the same sounds with which she began. They combine in another duet, the orchestra fusing into a single entity, leading to a very heavy, pointed series of falling accents. These cast a shadow over the lyrical climax of the piece, mezzo-soprano and baritone intertwining their lines, the music reinforcing their passionate expression of mutual love by surrounding them with soft radiance. Shivers come over the orchestra, which then violently erupts—and from nowhere, a shot rings out. The piece collapses, hollow, exhausted, finished.

Sawer has spoken of his desire for a very ‘precise’ orchestration, and his writing in Flesh and Blood is nothing short of magnificent. As already noted, there’s a certain ambiguity to aspects of the text, but Sawer finds a way both to allow for this while at the same time capturing directly the sentiments within that ambiguity. As such, although brilliantly effective it’s nonetheless an acutely painful piece. The world première took place on 15 February last year at the Barbican Hall in London, performed by soloists Christine Rice and Marcus Farnsworth with the BBC Symphony Orchestra conducted by Ilan Volkov.

This new work, with words by the British playwright and poet Howard Barker, is about the parting of a soldier from his mother. It begins with the soldier expressing his dread and anxiety and wish for love and concealment, but as the scene develops this is revealed to be part of a ritual in which the soldier eventually insists that his mother send him to his death because she created him and therefore only she can dispose of him.

The conclusion is that she does then send him away, knowing he will never return, or only as a body. It is therefore shown that it is the Mother (rather than, conventionally, the soldier) who makes the supreme sacrifice of their flesh and blood.

The music for the mother is at first lyrical and expressive, and that for her son more rhythmic and driven. As the piece develops, the two types of music gradually swap over.

[The mother, the soldier, enter from opposite sides to take their stations.
The mother gazes on her son. She cannot find words.
In her agony, she utters one syllable.]

Soldier: Try this he said, the storesman
He had no need to measure, he could see
I extended both my arms
Immediately the tunic fitted
But more than fitting
It clung, it clung

Soldier: So now I say, I say briefly
What might take so much longer to be said
Could take whole days to say
such as I thank you Mother
Was there ever a phrase of such banality?
I thanked the driver of the bus for issuing a ticket
And when I bought a newspaper
Thank you I said

Mother/Soldier: And yet, and yet

[They exchange a look of adieu.
At last the soldier turns as if to depart, but does not do so. He lifts one hand.]

[At last the soldier turns.]

Soldier: Under the floorboards
In the garden shed
Mother: God knows, God knows
Soldier: Screwed up like an embryo
Blankets covering my head
Scarcely breathing as they march to and fro

Mother: And then they go
Soldier: Your wonderful lying
Mother/Soldier: They go
Soldier: And I am so, oh so adoring
I take down a brush and begging you take down your hair
Watch it descend in soundless pouring
Saying one grey there Mother
And these lines on your neck are new
Or is it only
Because today is today
I look closer than I used to?

[They look with profound love.]

[her grief, her nostalgia, is abolished by a supreme effort of will]

Mother/Soldier: We go through our agony,
Brilliantly we drag our hearts out of our ribs
And thrash them with our fists
Soldier: Pulped hearts
Mother: Like clay
So they can be pressed into the moulds of grief and discipline
Soldier: Replace them now
Replace them in their cavities
Mother: Mine’s in
Soldier: Mine also, Mine’s in
Mother: Mine also
And when they bring you here my son it will not skip one beat
Not one
Soldier/Mother: I am so given
And came here only to be given
Who but you can give me to this dim garden of leaves and wind?

[The mother walks to the soldier]

Soldier: My killer laughs
Mother: The laugh is his
[she raises one hand to his face]
His laugh is his