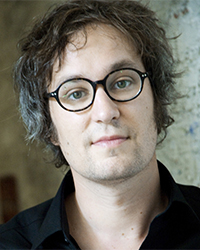 Staying with Trio Accanto’s superb recital at HCMF last November, Lied by German-born, Chicago-based composer Hans Thomalla makes for an interesting contrast with the piece by Brice Pauset. Thomalla treats the trio like aspects of a single entity (a ‘trinity’ if you like), the three players exploring ideas with one mind. There’s little sense of perspective; each of the performers occupies the foreground, and while it’s tempting to describe one part as having a melodic line while another embellishes it, one can just as cogently argue it the other way around, the former having a simplified version of the latter. Either way, it’s clear throughout that the material is intimately interconnected, to the point that a potent sense of klangfarbenmelodie is projected.

In essence, then, the drama encapsulated in Thomalla’s music—expressed most through implication and delicate dynamic contours—emerges out of what is effectively a single, composite thread of ideas; as time goes on the music feels increasingly repressed—sporadic accents amidst such tentativity lending an air of dazed hysteria—yet it leads to the work’s most beautiful music of all, ending in several wonderful minutes softly transfixed in shadow.

The first UK performance of Lied was given by Trio Accanto in St Paul’s Hall last November; as a group their combined sense of heightened intimacy is immersive enough, but saxophonist Marcus Weiss’ mellifluous tenebral playing is just mesmerising.

My „Lied“ (english „song“) for saxophone, vibraphone and piano starts out from very simple, almost template-like musical figures: a slow melody in the saxophone and a reservoir of six-part chords. The form is simple as well: four strophes, three refrains and a coda.
In spite of such ostensible simplicity the music seeks for non-measurable richness by exploring its own inherent contradictions. Notes of the chords and the melody on one side, and their sonorous realization on the other side – the multiplicity of sonorities in the Saxophone (from a complex multiphonic to the barely audible, airy pppp-tone); the differently shaped attacks and sustains in the piano and the vibraphone – they never add up seamlessly, never entirely subordinate to one another. A different melodic and harmonic world develops in the gaps, a world in which untamable sound and predefined melodic and harmonic remnants react on one another, communicate with each other, while their dialogue follows an uncharted path.