Blasts from the Past: Dmitri Shostakovich – Cello Concerto No. 2 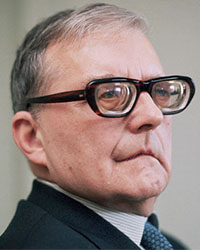 On this day, in 1966, Dmitri Shostakovich turned 60, and the evening brought a birthday concert including the world première of his Cello Concerto No. 2. The piece is well worth singling out for celebration, partly because to my mind it starts to resolve the very real difficulties that confront listeners when they engage with his music on anything more than the most superficial level. Put simply, there’s a problem, and it’s one i mentioned in a recent review (on Bachtrack) of his first Violin Concerto, composed over a decade earlier:

The challenge for audiences is to accept the fact that the composer had essentially just two modes of expression: slow, circling clouds of intense anguish and fast, flippant exercises in military precision. The challenge for performers is to find something fresh and vital within this variegated tautology, in order to locate and extract the essence of a man who, on his own admission, felt a compositional need to “resort to camouflage”.

Without wishing to get into an argument with myself, this problem by no means prevents one from enjoying and, more deeply, from grasping the acute intensity of feeling and distress that doesn’t merely underpin the music but burns within it like a molten core. Yet the problem remains, and it’s easy to feel frustrated, even downright annoyed, in Shostakovich’s company, at how entrenched these twin aspects of his compositional personality seem to be. (It would be arrogant, i think, to criticise his circumspection; one suspects he simply wanted to stay alive.) The Second Cello Concerto, though, moves beyond this, into broader and less certain waters, quietening down the grotesque jauntery in favour of an immense dive into the darkest depths of introspection. Through three movements lasting a little more than half an hour, Shostakovich tapped back into some of the radical spirit of enquiry he explored much earlier in his life (from the time of the Fourth Symphony and earlier), and began to develop a new way forward.

Throughout Shostakovich’s career, his slow movements (particularly those of the symphonies) stand out as not just some of his finest work, but among the finest moments in all twentieth century music. The first movement of the Second Cello Concerto—which began life as the possible start to a new symphony—is one of them, taking the polar opposite approach of the First and opening in a place draped in black, the cello initially tentative at the prospect of walking a pathway that goes into an altogether other kind of beyond. With just harp and strings for contrapuntal company—shading the cello line with a myriad hues of purple, indigo, burnt umber, maroon and ultramarine, but never grey—the cello only slowly and with apparent difficulty manages to find a way up from its lowest register. A remote horn seems to point the way towards something, leading to a confirming statement of the cello’s opening melody by bassoons and contrabassoons, and the upper winds suddenly let fly an entirely unexpected fragment that has the after-effect of consolidating both the orchestra as a whole and the cello and its material in particular. The horn becomes a travelling companion, and the soloist moves forward with more confidence. But a pivotal moment follows, in a cadential exchange with the strings; having resolved the first time, the second time they don’t, leaving the cello suddenly sounding lost and very small indeed singing out over the strange chord hanging ominously beneath it. So much for confidence; back it goes to the bottom. The orchestra now takes the lead, proffering pace and clarity (both marshalled by a xylophone), and the tone becomes light-footed and almost dance-like, lines replaced by points, leading to a huge, exuberant rendition of the cello’s melody overlaid with shrill woodwind birdsong. If this is meant to be a climax, Shostakovich instantly explodes it, violently smashing things up with a bass drum that at first makes even the soloist’s line splinter into pizzicato notes. And then, essentially, we’re back where we began, a fragile double-stopped reworking of the opening with the barest reinforcement from the strings. Elements from earlier resurface, but this time the cello stays put, the horn mourning over proceedings at the end.

Shostakovich fashions the short second movement from the slenderest of motifs, the apparent lightness of its articulation countered by the stodginess wrought upon it by inhabiting such uncomfortable and incongruously low registers. There’s definitely something of the danse macabre quality that rears its head so often in the composer’s earlier work, but sufficiently unhinged here that even when he throws in the makings of a militaristic march later on, it sounds more like the disjunct ravings of mental illness than anything approaching a cogent (albeit ‘camouflaged’) anti-fascist stance. It thereby goes beyond mere grotesquery into a place that’s genuinely unsettling and even rather upsetting. This leads straight into a horn fanfare heralding the long final movement, convincing the cello to execute its own version of it, the military drum roll now ludicrously replaced with a jangling tambourine. Briefly pensive afterward—pursuing the motifs but not the demeanour of the middle movement—it doesn’t take long for the cello to sag downwards again, only now it’s propped up by an incongruous, slightly absurd ‘drum machine’ of sorts that keeps halting as the soloist emphasises over-flamboyant cadences. As time goes on Shostakovich reinforces the music’s motivic nature more and more, obsessively so, in the midst of which the cello starts to become increasingly lyrical; a lengthy episode of this over an extended bass drone feels like a kind of psychologically-damaged rethinking of the passage in Strauss’ Don Quixote where the eponymous protagonist takes an imaginary ride through the air. For all its forward motion, this is cyclic music, going round and round without seemingly knowing how (or even if it’s possible) to move beyond the narrow orbit that can only be described as its un-comfort zone. It’s hard to say whether the subsequent massive climax built upon the same palette of motifs is a splurge of uproarious frustration or—echoing the equivalent point in the first movement—simply Shostakovich carpet-bombing his material to see whether it can take the pounding. The result, either way, is wreckage, the cello continuing to work away at its tiny treasure-trove of ideas surrounded by the ruins of an orchestra, all the while sliding back down into the registral abyss, surrounded at its sepulchral end by one of Shostakovich’s horribly eerie soft percussive codas.

A work that avoids any trace of sarcasm or lip-service grandiosity in favour of an honest engagement with internal suffering, Shostakovich’s Cello Concerto No. 2 is deeply, deeply powerful and immediate, and one of the greatest works of his later output. This performance of the piece took place at the Royal Festival Hall in January, given by the London Philharmonic Orchestra conducted by Vladimir Jurowski, with none other than the great Russian cellist Natalia Gutman. It’s not, it must be said, Gutman’s finest hour (she had been suffering from severe back problems at the time), yet i can’t help hearing the occasional instances of faltering intonation (and even a memory lapse after the final climax) as feeding into the work’s omnipresent mental anguish. If you’re after a CD recording, the best i’ve yet heard is still the classic 1984 performance by Heinrich Schiff with the Bavarian Radio Symphony Orchestra conducted by Maxim Shostakovich (the composer’s son), still available (and now at a budget price) on Philips. But i notice Alisa Weilerstein has a nicely-timed new CD out this week featuring both Shostakovich cello concertos, which—considering how much fire she’s brought to the work in live performance—is surely worth checking out.

Many thanks, Simon, for shining a spotlight on a DSCH work with which I wasn’t familiar (unlike its far-more-frequently-performed forebear). I agree that it’s another one of those marvellous instances (like, for me, the 5th String Quartet, a personal favourite; c/f the frankly overrated 8th Quartet) where the two modes of expression you identify somehow combine in such a way as to amount to more than the sum of their parts. (I also enjoyed the final movement intrusions of what sounded a lot to me – although I’m not convinced it was the composer’s intention! – of the archetypal “rock beat”, i.e. what you describe as a drum machine…)

Many thanks. Yes agreed bout the work occupying a high place in late DSCH output. Alongside many many others of course..I’d always held Rostropovich on DG in high regard..Interested to hear this performance..To think that this composition was written when music of Boulez, Stockhausen was in ascendancy in Western Europe..And Boulez’s views on DSCH are pretty much obscene..I think in one article he described him as watered down Mahler!! I kind of get the feeling that works like this one here will still be around whereas so many of Darmstadt school will be oddly enough consigned to ‘historical flavour of the month’..Which is somewhat ironic given that DSCH was dismissed by many of that school for being ‘historical’…Thanks for the post.