i’ve recently got back from the annual Wittener Tage für neue Kammermusik (Witten Days for New Chamber Music), Germany’s annual three-day blow out celebrating the newest iterations of the idiom. It was my first experience of the festival, and i have to say my initial impressions were overwhelmingly positive. The definition of ‘chamber music’ is treated with considerable flexibility, ranging from solo pieces to works for moderately large chamber orchestras, and the presentation and performance standard of the concerts – not surprisingly, considering its reputation – were never less than outstanding, staged in superb venues, showcasing some of the finest contemporary music specialists in the world. As for the music, which was hugely varied, for the most part the same could be said of the featured composers. For the most part.

The glaring exception to this otherwise generally clean slate of magnificence was, unfortunately, the festival’s featured composer, Nicolaus A. Huber. Huber’s not a composer with whose work i was previously familiar – my only prior encounter being on Ensemble Recherche’s Liebeslieder disc a couple of years back, a piece that had left me pretty unimpressed – and on the basis of what i heard at Witten, that tentative opinion has well and truly plummeted. Some of Huber’s music ranks among the most stupid i’ve ever had to sit through. The most egregious example was his Mit etwas Extremismus, a 20-minute cross between a happening, a flashmob of dementia patients and a car accident. The way in which Huber embedded theatrics throughout this exercise in disjunct, fragmented ideas conveyed nothing more than the most cheap smugness. His other works performed throughout the festival, while they were nowhere near as irritatingly outré as that piece, exhibited a quality that i can only describe as being akin to the ‘uncanny valley’. Take … in die Stille for solo cello: on the one hand, the music had a veneer of plausibility from the sheer conviction given it by soloist Michael M. Kasper, whose exquisitely-handled performance projected an air of emotive passion with real authority. On the other hand, did it have a soul? At times, it was as though the mechanics of the music were laid bare, exposing it to have all the emotional depth of a character in Westworld. It was a disconcerting quandary that manifested itself in every other Huber composition. i kept thinking – to switch to a parallel metaphor – of the android Data in Star Trek: The Next Generation, whose periodic attempts to emulate artistic creativity produce results ranging from curious to baffling to… well, almost plausible. Which brings us back to Huber. If it turned out that his works were the product of similar artificial intelligence-driven attempts at musical composition, i wouldn’t be in the least surprised. Their dubious sense of direction, specious utilising of existing musical tropes and materials, arbitrary descents into blunt repetitions – all of it was so bizarrely off-kilter that it remains some of the weirdest concert listening i can remember. One doesn’t usually sit through a performance thinking, “this is something that’s been composed” – but during Huber’s music one was always acutely aware of the artificiality of the act of composition, the positioning of ideas one after the other. In my most charitable moments, i felt pity towards it. 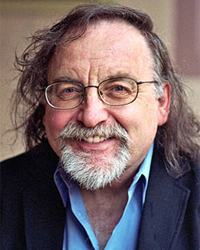 As far as pretty much everything else was concerned, not just every concert but every piece in every concert seemed to expand the possibilities and preconceptions of ‘chamber music’ in a uniquely different way. They spanned a very broad continuum, at one end typified by an intense exploration of line, at the other focusing on textural evolutions and juxtapositions. Many were for, or revolved around, the string quartet. Surely the most highly-anticipated for many people was Umbrations, Brian Ferneyhough‘s new cycle drawing on material from renaissance composer Christopher Tye (the title is derived from the Latin umbra – ‘shadow’ – presumably hinting at the relationship with Tye’s music). Off and on, Ferneyhough has been working on the eleven movements of the cycle for over a decade and a half: the earliest, In Nomine a 3 for piccolo, oboe and clarinet, dates from 2001, while the most recent, In Nomine for solo cello, Ferneyhough had still been (quote) “chopping and changing” (unquote) on the day of the concert, drastically reducing it from around sixteen minutes to just six (i’m told the longer version will be available for performance in isolation from the rest of the cycle). This was also the world première of the cycle as a whole – given by the Arditti Quartet and Ensemble Modern, conducted (for just a quarter of its duration) by Brad Lubman, in Witten’s grand but architecturally quirky Saalbau. There’s a couple of general observations to make about it. Though described as being for ‘string quartet and ensemble’, the key word there is ‘and’; the quartet and ensemble (of 12 players) essentially sit side by side, never performing together, the one exception being seventh movement Christus Resurgens, which adds the ensemble double bass to the quartet. Though not exactly strange, it felt like a bit of a missed opportunity, leaving one wondering whether collating these individual pieces (the movements are all works in their own right) into a cycle was in fact a much later consideration. This question was further raised by its overall effect; though sharing consistencies of character (about which, more in a moment), the extent to which Umbrations conveyed a convincingly unified cycle is debatable, though further listenings are clearly needed to gain a deeper appreciation of the threads and interconnections across its 45-minute span. In any case, these are pretty minor observations in comparison to the music itself, for which an appropriate word – startlingly enough – would be ‘romantic’. When i wrote about the four Dum Transisset movements for string quartet following their performance at the 2010 Proms, i remarked about a lyrical presence lurking beneath their surface. While that doesn’t manifest itself at all points throughout Umbrations – In Nomine a 3 is more concerned with athletic conversationalism, while Christus Resurgens places greatest emphasis on melodic intricacies – the remaining works in the cycle take that lyrical seed and allow it to germinate into rich, at times even opulent, musical forms. With some surprises along the way too, such as the use of tuned cowbells in duet with piano in fourth movement Lawdes Deo (delivered with a blend of frivolity and fastidiousness by percussionist Rainer Römer, one of the all-round heroes of Witten 2017), and the prominent use of a steel drum in final movement In Nomine a 12, in what is arguably Ferneyhough’s most overtly lush music to date, concluding the cycle in slow, measured, reflective fashion. That problematic (from the composer’s perspective) cello solo, In Nomine, performed by the Arditti’s Lucas Fels, made an enormous impact in part due to its extreme quietness, filled with a mass of tiny details within which bursts, hints, echoes and perhaps also red herrings of melody bubbled their way to the surface. It was followed by O Lux for 10 instruments, completed in 2005, another morsel of striking loveliness, its profusion of lyrical counterpoint moving between extremes of individuation and assorted collaborations. Despite my reservations about the overall effectiveness of Umbrations as a whole, its scale was at least easy to negotiate, due to the relatively concise durations of these movements (between two and seven minutes long). It’s perhaps better to think of it as an anthology; either way, it’s a fascinating, ambitious and above all beautiful collection of works that will surely cause both Ferneyhough’s supporters and detractors to raise their eyebrows.

It was good to have another opportunity to hear Harrison Birtwistle‘s The Silk House Sequences, which came after the Ferneyhough. Hearing it at HCMF 2015, i’ll admit to finding it somewhat defiant (at the time, i described it as being “relayed in the gruffest, ‘take it or leave it’ terms imaginable” – not that this should come as any surprise to anyone familiar with Birtwistle), but in Witten the experience was entirely transformed. i was struck most by two things. First, it’s playfulness, with regard both to the material shared by the quartet as a whole as well as the way Birtwistle makes them throw fragments of musical ideas between each other, like a wild, hocketed game of catch. Second, the way Birtwistle structures the work, ushering it through a sequence of highly varied episodes characterised by distinct modes of behaviour, was deeply impressive. From break-neck articulations of atomised particles to muted acts of contemplation to motivic bursts of energetic regularity, from solitary, halting notes to huge cascades of them, whether negotiated via abrupt gear-changes or gradations of velocity, Birtwistle makes the work’s vast dramatic range utterly seamless. There was no ‘take it or leave it’ this time: now, The Silk House Sequences spoke as a work abounding with generosity and vivid clarity.