Concertos are a regular occurrence among Proms premières. Usually – too often – they’re for violin, but last year bucked this trend by featuring a pair of cello concertos (by Huw Watkins and Charlotte Bray). The 2017 season is bucking it some more, again featuring two of them, the first of which, by Pascal Dusapin, was given its UK première last Wednesday by soloist Alisa Weilerstein with the BBC Symphony Orchestra conducted by her brother, Joshua Weilerstein. The title, Outscape, is an interesting word, which Dusapin describes as meaning “the route, or the opportunity to flee, to invent your own path”. He also speaks of one particular way in which the piece behaves, moving “back and forth between a cello ‘becoming an orchestra’ and an orchestra ‘becoming a cello'”. Yes and no. In practice, the relationship isn’t anything like as mutual or reciprocal as Dusapin states. The cello, while not present throughout, certainly dominates, both in terms of the relative foregrounding of its material as well as the very obvious way that the orchestra tip-toes around it, seeking above all to support and/or imitate, almost acting like a protective mandorla. Nothing wrong with that, of course, but it again highlights – as i recently remarked – how many pinches of salt are needed to season the reading of programme notes.

Let’s talk about journeys, then, since this is clearly uppermost in Dusapin’s mind. There is a very clear notion of journey running throughout Outscape. It’s not one being undertaken with any alacrity, but an audible sense of the cello moving along – meandering more than anything, suggesting elements of uncertainty about the way forward – is strong. From the outset, the soloist finds something of a familiar or sidekick in a bass clarinet, the work opening with a slow, thoughtful conversation between the two that develops into a duet, often returning to low C♯, a pitch that retains importance and prominence throughout (perhaps problematically so; i’ll come back to this). Dusapin makes it clear in these opening minutes that, despite their dour demeanour, melody is paramount; the journey being taken in Outscape is one articulated above all through the outworking of line. 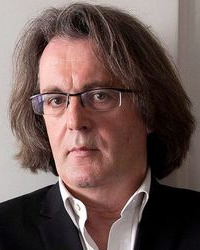 This outworking, depending on your level of patience, is either maddeningly ponderous or enticingly reflective; for the most part i heard it from the latter perspective. Dusapin evidently does not want to rush any part of Outscape, allowing both cello and orchestra to stretch out the notes of these searching melodic lines way beyond the length one usually encounters. (In this regard, despite the enormous aesthetic differences, don’t be surprised if Tavener’s The Protecting Veil incongruously comes to mind; it did to me on several occasions). One comes to feel as though time has become malleable, at points like these becoming slowed down such that it affords a protracted examination of each passing moment, before snapping back into more tangible tempo. Yet even when the cello does move more briskly, Dusapin regularly uses the orchestra to paint extended bands of colour behind it, retaining that inherent sense of timelessness that i’ve just described. It should be stressed that the harmonic and timbral palette employed by Dusapin is mesmerisingly lovely, drawing on that very particular type of opulence so characteristic of French music since the dawn of Impressionism.

It’s not all drift and delicacy though, the cello gets riled up at numerous points, provoking responses from the orchestra in kind – it’s these moments above all that demonstrate just how carefully the orchestra is working to follow and align itself with the cello. It is a one-sided relationship, but that seems fitting with the abundant plangency of the soloist. Its material, if not melancholic, is certainly downcast, generally speaking, and even when, as around twenty minutes in, the orchestra finally asserts itself more forcefully, it’s not a means to establish themselves on an equal footing, still less an attempt to take control of the piece. i don’t think it’s inaccurate to describe the orchestral manner displayed in Outscape as genteel, and in this particular instance, one can hear their outburst as both a response to the cello’s previous passage – which became very dark – and also a kind of ‘scene setting’ for it now to inhabit. It’s not often you hear an orchestra acting in the role of therapist.

There are two important qualifying remarks to make about Outscape. There are times when the piece definitely starts to pall, particularly around two-thirds of the way through (around the 16-minute mark) when, after a silence, the piece essentially returns to a similar point to where it began (sans clarinet). And this sense of return is the second point: in a composition concerned with journey, it’s easy to make the case that, taken as a whole, what – if any – progress has really been made? That C♯, far from sounding like a ‘tonic’ almost seems to become a thorn in the work’s side, or a tether from which it can’t break loose. Outscape doesn’t end on that pitch, but it’s still implied everywhere, and the work’s final note – a B♮ – clearly wants to resolve upward to that C♯. It brings to minde the episode in Strauss’ Don Quixote where the protagonist imagines himself flying through the air—yet the music, fixed doggedly on a low D pedal, makes it clear that the entire thing is an illusion. Is the journey in Outscape similarly illusory? Whether it is or it isn’t may be irrelevant; to repeat Dusapin’s words, the cello certainly does “invent its own path”, and regardless where it ends up, the journey it takes is fascinatingly strange and at times ravishingly beautiful.

Outscape is my second score for cello and orchestra. The first was written in 1996 and was called Celo (to keep a secret in Latin). Even after all these years, I knew that one day I would once again encounter a concerto for that instrument. And then along came the commission from the Chicago Symphony Orchestra for Alisa Weilerstein. I was dazzled by Alisa’s tone and phrasing, and by her incredible ease in addressing the most diverse repertoires (from Elliott Carter to Edward Elgar via Haydn!) and I immediately felt that a new composition could be inspired by such magnificent, unfettered musical energy. To bring together such an artist with an orchestra as majestic as the CSO is an extremely rare challenge for a composer. I was very happy to have composed this score for such musicians.

But it’s difficult for me to explain my work because the substance of thought is confused with the flow of the music. To compose is to create a living thing. The music comes to life itself: it draws the force of its regeneration from its own dynamism; it invents its own future, the conditions of its form and the emotions it produces. Ultimately, something has been said.

The title carries the musical project within itself. Outscape is a rather unusual English word (at least for a French speaker); it’s a rich word that has a variety of meanings from the most common to the more philosophical. Outscape is the route, or the opportunity to flee, to invent your own path. I loved this word because fundamentally it is like a summary of my work history: escape elsewhere in order to understand and ascertain, and try to see and hear further.

That’s how this concerto is invented by itself, by going incessantly back and forth between a cello “becoming an orchestra” and an orchestra “becoming a cello”. Every musical force wants to go towards the other, to merge with the “otherness”, to get to know and become those differences, to escape, return, and generate a renewed musical future. In Outscape, I’ve never felt like I put the soloist and orchestra in opposition; instead, I guide them towards one other.

At the beginning of Outscape, everything seems simple: the cello plays a low note, a C#. The bass clarinet immediately plays the same note: an echo, the note’s shadow. By mimicking one another in turn, the cello and bass clarinet – followed by the whole orchestra – will learn to sing and unfold together, imagine multiple ways to escape and together invent another “nature”…

I dedicate Outscape to Bill Brown, for his wonderful support and friendship.