Haunted but undaunted, fading yet indefatigable: The Caretaker – Everywhere at the end of time – Stages 2 & 3 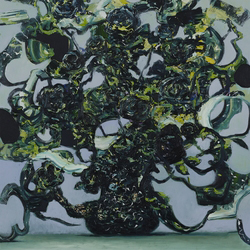 Appropriately enough, considering this evening is Hallowe’en, i began today being haunted by ghosts. To explain: in the early hours, not sufficiently drowsy to return to sleep yet too somnolent even to begin contemplating getting out of bed, i grabbed my headphones and groped blearily on my device for something to listen to. As it turned out, these peculiar, potentially unpromising conditions could hardly have been more perfect for the album that my fingers alighted on: Everywhere at the end of time – Stage 3 by Leyland Kirby’s occasional pseudonym The Caretaker, released a couple of weeks ago. As the title suggests, the work is the latest in Kirby’s ongoing project exploring aspects of memory and dementia.

Much of the music put out over the last ten-or-so years that one might broadly describe as hauntological is problematic. Born from an apparent wave of retromaniacal enthusiasm for tapping into the supposedly mysterious darkness and sinister undertones of an ill-defined ‘past’ (some of which only appear sinister from a contemporary perspective; they never seemed such at the time), the results often comport themselves as ersatz memoradelic mash-ups, counterfeit, superficial musical worlds fashioned from borrowed tropes and mannerisms. It’s cheap and it’s childish, and while there’s no need to name specific names, the Ghost Box Records label has a lot to answer for in fostering it. There are exceptions, of course, lots of them, but what sets Leyland Kirby’s work so far above and beyond almost everything else done in hauntology’s name is its authenticity.

i first got to know Kirby’s music in the mid-2000s, first through Theoretically pure anterograde amnesia, his dazzling 3-hour 2005 survey of disintegrated sonic echoes, consolidated the following year in his gigantic project The Death of Rave (about which i’ve written previously), a 19-hour “audio soup of half remembered rave anthems” that through its seemingly never-ending sequence of noise-caked movements encapsulated an era by channelling subliminal, subconscious and submerged musical memories. Personally speaking, The Death of Rave was a turning point in my relationship with Kirby’s music in two respects.

First, it spoke to me in a different way – not exactly more directly, but more relevantly – due to its subject matter, the UK rave scene, being something of which i had direct experience and had lived through. From a listening perspective (and only now do i realise that Marko Ciciliani’s Pop Wall Alphabet, although doing something very different, has striking similarities) it had an evocational immediacy, not simply by throwing me back to the times and places and sounds and sights that i once knew, but even capturing something of the atmosphere, of the occasion, of the lights and the sweat and the reverberation off the warehouse walls and the ever-present admixture of danger, rebellion and ecstasy (in every sense) that underscored that whole period. Far from merely mashing-up tropes, The Death of Rave connected with the very heart and soul of what made that music what and when it was. This was an entirely new experience for me, so maybe it’s fairer to say it was a personal turning point bigger than just being in relation to Kirby’s music.

Second, it caused me and continues to cause me to reflect that while Kirby’s work as The Caretaker taps into a musico-historical world that’s beyond my experience, simply because it’s before my time – as such, it’s an entirely different entity from The Death of Rave, not just in its choice of materials but also in the way it sits in relation to, presumably, the majority of its listeners – yet Kirby’s genius is in making this music no less evocational, immediate and moving. This is especially the case – perhaps more so than ever – in Stage 2 (which came out earlier this year) and Stage 3 of Everywhere at the end of time. 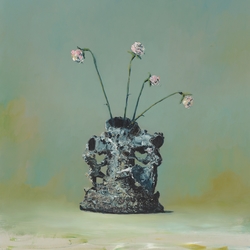 It’s tempting to imagine the project as a continuation of the very first Caretaker album, 1999’s Selected Memories from the Haunted Ballroom. But where that was lopsided, muffled and monochromatic, heard from the musical equivalent of a Dutch angle, Everywhere at the end of time is more akin to tiny vignettes, their colours present but befuddled and fast fading. Its acute emotional depth and poignancy comes primarily from the way each musical morsel – lovingly grafted from decrepit 78rpm records – conveys an undaunted grand sweep, by turns music hall jauntiness and filmic romanticism. The contrast between this indefatigable spirit and the way the music seems practically to be vanishing before our eyes is an exquisite metaphor for the agonising insidiousness of dementia, each short piece a character struggling to maintain coherence while barely cognizant of their deterioration and imminent evaporation. The way Kirby loops his tiny fragments – yet rarely giving the impression of a straightforward, obvious repeating pattern (some of the fragments are long) – only reinforces this further, holding on in vain to a miniature recollection of what was once an infinitely larger reality, like trying to preserve a story in a single sentence. The reverb that Kirby adds acts like a cross between aspic and formaldehyde, preserving these ruined, vague vestiges in a viscous soundworld where every crackle, pop and scratch from the shellac becomes ominous electrified noise and bursts that i can’t help hearing as neurons firing—or exploding.

Stages 2 and 3 of Everywhere at the end of time take the journey into a more excruciating, heart-rending place than Kirby has yet ventured. This is partly down to the fragility of the music, which at times sounds practically so thin as to have become translucent, though pierced not by light but shadow. But above all it’s due to the sentimental (in the best sense) beauty that sings out in spite of everything. From Stage 2, ‘Glimpses of hope in trying times’ is literally one of the most gorgeously painful things i have ever heard, the past here rendered almost alien, its music other-worldly, and closing track ‘The way ahead feels lonely’ makes four minutes of aching, fin de siècle wistfulness feel like an eternity, a track that you want never to end, even as its final bar draws ever closer. Stage 3 pushes the disintegration further, its looped fragments almost coming apart at the seams, with regular drop outs, and it also applies an additional layer of obfuscation. Adjacent tracks ‘Internal bewildered world’ and ‘Burning despair does ache’ are among the more extreme examples, their music reduced to a granular apparition of its former glory. Something of a paradigm of Stage 3 is its closing track, ‘Mournful camaraderie’, two minutes that are weirdly comforting, dronal and ecstatic yet glazed over and dull.

It’s impressive that Leyland Kirby is still able to mine this area so deeply, and find new ways to explore and articulate the role and damaged effects and artefacts of memory. It’s music we don’t so much see as glimpse in our peripheral vision, ghosts and phantoms that cause the past – whether real, semi-real or imagined – to continue to haunt the present.

All three stages of Everywhere at the end of time are available as a digital download via Bandcamp (which includes the next three stages to come when they’re released), as well as a 3-CD box set, and Stage 3 – most appropriately – is also available as a limited edition Vinyl LP.

Simon, this is a project that I really feel I should listen to as a means of developing greater empathy with my dad’s Alzheimer’s (treated as such – although, to date, still not officially diagnosed – from 2014 onwards, with a collective awareness (as opposed to mere suspicion) that something was seriously “up” having come around a year earlier). However, I made the mistake of putting Stage 1 on as background music while trying to work, and ended up having to switch it off around halfway through as the distress it was causing gradually began to render work nigh-on impossible. (Interestingly, I haven’t yet experienced the same reaction to Asher Tuil’s Miniatures, even though it may strike the casual listener as superficially similar, perhaps because it isn’t explicitly “about” dementia.)

Chris, it doesn’t surprise me that you had such a strong reaction to this music: i think Kirby has tapped into something genuinely remarkable in his work as The Caretaker, and as i’ve followed his work over the last decade-plus the extent to which i’ve realised the power of his dementia studies has grown massively. i’ll admit it took a while for the penny to drop, as a fair amount of his work – particularly in his V/Vm guise – is extremely tongue-in-cheek and irreverent (not unlike Richard James/Aphex Twin) so grasping the enormity and subtlety of this parallel (and, now, dominant) side of his artistic personality really wasn’t immediately obvious to me when i first encountered it – my own first contact was Theoretically Pure Anterograde Amnesia – though i loved how immersive and vivid those soundworlds were.

If Stage 1 has hit you as hard as you describe, then i can only imagine what will happen when you listen to Stages 2 & 3 – they’re some of the most painful, heartbreaking music i’ve ever encountered, and though i have no personal experience of dementia among my family and friends, the clarity of Kirby’s vision – or, rather, the acutely obfuscated rendering of it in these incredible albums – is all too immediate, ever more swamped by bliss-ignorance and oblivion, where the walls of understanding are closing in tightly. For my own part, i tried listening to the latest part, Stage 4, the other night, but i realised within a few moments that this was entering much more complex psychological territory and i wasn’t awake enough to deal with it. To be continued…

Oh, and with regard to Asher’s Miniatures, i agree with you: the tone is hauntological but neutral, without the explicit emotional heft of Kirby’s music, which no doubt accounts for your different reaction.

Thank you for your considered responses to both parts of my comment, Simon. Actually, I’ve only just realised that I was three-quarters of the way through Stage 2 when I gave up: the way the project is arranged on the Bandcamp app (as “sides” rather than discrete albums) made me think I was still listening to Stage 1. No wonder I was getting so upset!

Update: I ultimately decided to give myself over (almost) entirely to the remainder of Stages 2 and 3 during a prolonged lunchtime walk, and found them much easier to cope with once I’d stopped trying to fight my own reaction to them. Funnily enough, now that I’ve reached Stage 4 I’m finding the music is generating much less cognitive dissonance, perhaps because it’s already passed through the “event horizon” of ready recognition…

[…] on repeating loops of music, affording mere windows into something much bigger and grander (what i’ve previously described as “like trying to preserve a story in a single sentence”). Even at the outset of Stage […]

This album is definitely haunted me since i first heard it, nothing else has ever had close to this sort of impact on me.