Let’s talk about Ensemble Musikfabrik. First off, the German ensemble is responsible for some of the most memorable and fascinating concerts i’ve ever attended. Their performances during the 2016 Huddersfield Contemporary Music Festival remain personal favourites, both the opening weekend concert – including among other things, Georg Friedrich Haas’ I can’t breathe and Marcin Stańczyk’s marvellous Some Drops, both showcasing trumpeter Marco Blauuw – and also the concert based around the ensemble’s fabulous recreations of Harry Partch’s microtonal instruments, featuring Claudio Molitor’s hour-long act of sonic wonderment, Walking With Partch. But even more than these, the concert that remains most affectionately in my memory – one of the most exhilarating concerts of my life – was their performance at the one-off Bristol New Music festival in 2014, where the combination of Partch’s And on the Seventh Day Petals Fell in Petaluma with a medley of works by Frank Zappa must rank as one of the finest acts of music-making that the city’s Colston Hall had ever experienced. What all of these concerts demonstrate is Musikfabrik’s generous and warm openness to all forms of experimentation, no matter how weird or ostensibly ludicrous, in conjunction with a level of determination and commitment that’s nothing less than absolute. Only an attitude like this could have led to the Partch instruments being so painstakingly and lovingly recreated, as well as to the development of new iterations of familiar instruments, such as their double-bell brass instruments. 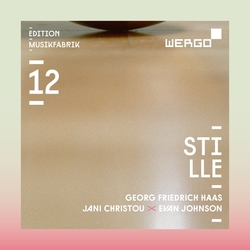 The ensemble’s outlook is mirrored entirely on their recorded output which, more than most, goes a long way to capturing the vivid discombobulation of their concert performances. Their most recent disc, Stille, the twelfth in their ongoing series Edition Musikfabrik, is yet another case in point. It’s true to say that a Musikfabrik concert can and often does involve a certain amount of acclimatisation, and it’s also true for Die Bewegung der Augen by Evan Johnson. As with all four works on this disc, it’s a piece exploring silence, or rather the fact that silence “is never empty” (from Johnson’s programme note). Clearly the by-product of a lot more activity (in one form or another) than is audibly apparent, Johnson’s music here sounds private, not merely behind closed doors but positively internalised and miniaturised, as though we were privy to small-scale activities and actions that would otherwise be entirely oblivious to us. Its little bursts of material surrounded by silence gradually instigate a different mode of listening, one where i came to feel like the Incredible Shrinking Man, becoming smaller and smaller to the point that its tiny sounds and gestures yawned ever more impossibly above me. Beyond this, particularly in the second and third movements, a halting lyrical streak emerges that, in such a pint-sized context, sounds enormously poignant.

Georg Friedrich Haas is represented by two works. His 2009 song cycle for soprano and chamber orchestra …Wie Stille Brannte Das Licht sets texts by Georg Trakl, Theodor Storm, August Stramm and Else Lasker-Schüler. Haas creates something here that in many ways sounds like a 21st century equivalent of Berg’s Altenberg Lieder. Though not as brief as Berg, Haas’ seven movements (in the three without text the soprano vocalises) are still relatively short and generally possessed by a single idea. Furthermore, again like Berg, the expressive language has what may appear at first to be a kind of cool aloofness, almost disinterest, despite considerable emotional range and depth articulated by the words. Again it takes time to adjust, whereupon its particular form of lyricism becomes clarified with real force. Voice and instruments speak as though twin components of the same expressive organism, perhaps nowhere more beautifully than in fourth movement Stünd’ Ich Mit Dir Auf Bergeshöh’ (‘Were I to stand with you on the mountain-top’) where the orchestra initially punctuates the start of each phrase of melody (usually but not always with the same pitch) before setting up an increasingly unsettling polarised environment of low growling and high tremulous clatter. The seeming remoteness of the music is belied by the immediacy of its musical language (over time, it almost comes to feel ‘Romantic’), which leaves one wanting to listen again as soon as it’s finished. Haas’ 2011 wordless exploration of the Biblical Song of Solomon, „Ich Suchte, Aber Ich Fand Ihn Nicht.“, is more closely-related to the kind of ‘study’ approach – examining specific types of sonic effect and their potential – that typify his work of recent years. Haas specifically quotes this phrase from the text, part of which forms the work’s title, “My soul failed when he spoke: I sought him, but I could not find him: I called him, but he gave me no answer.” It’s perhaps not fanciful to hear a sense of this fruitless searching as a thread running through the work’s evolution, which involves an interplay of instability and repose, continually moving on from one thing to another. To call it ‘textural’ would do a disservice to the level and quantity of detail it contains, passing through episodes and alighting on instances that, as in so much of Haas’ music, somewhat boggle the mind and the ear. Actually, to say the work features ‘repose’ is untrue: there are apparent points of stability, usually harmonic – a sustained brass triad around three minutes in, which for a time becomes a focal point; 7th and 9th chords around ten minutes later that seemingly provide something similar, the latter setting up something akin to a complex harmonic series – but they’re proved ephemeral. This is music about searching and longing, but which ultimately finds neither a climax nor a resolution; it’s undeniably a lovely and typically immersive experience, yet it’s impossible to disagree with Haas’ remark about the end of the piece: “the silence that follows is agonising”.

For me, the most impressive work on the disc is Janu Christou‘s 1968 Anaparastasis III „The Pianist“, a work described as being for “actor, conductor, ensemble and continuum”. One might almost call it an ‘anti-piano concerto’, due to the actor’s apparent inability – whether through mere reluctance or full-on pathological horror – to touch, let alone play, the instrument. In front of an omnipresent but anonymous stretched band of pitch/noise from the ensemble – a fairly tight cluster that grows ever more intense throughout the work’s duration, presumably the ‘continuum’ – we hear a litany of strained exhalations and stressed vocalisations, the apparent result of an in extremis case of performative constipation. There are occasional massive and momentary eruptions – bangs and screams, some also manifesting in violence to the piano – but far from bringing release they only seem to ramp up the tension still further, as though the mechanism of a rack had been tightened by several more notches. This is due in no small part to that band of pitch/noise that never goes away and which always seems ominously more present after each of these outbursts. The journey this piece takes us on is distressing, inscrutable, hilarious and horrifying in equal measure, culminating in full-scale eruptions which sound as though the entire ensemble are smashing up their instruments (presumably on the actor and his piano). As a recording it proves the extent to which Musikfabrik can prevent a work from suffering due to lacking its visual component. To see this piece would surely be utterly remarkable, yet as a purely aural experience i can’t help feeling it’s even more troubling. In the literal sense of the word, Anaparastasis III „The Pianist“ is quite incredible, and and it’s easily one of the most completely gripping compositions that i’ve heard all year. 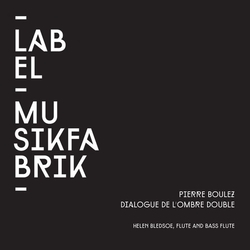 Beyond the ensemble’s ongoing Edition Musikfabrik series, they’ve also set up Label Musikfabrik as a platform for digital-only releases of solo and small-scale pieces. An open-ended, ongoing collection, to date 42 works have been released – by Rebecca Saunders, Mauricio Kagel, Liza Lim, Gérard Grisey, Chaya Czernowin and Evan Johnson, among many others – of which eleven have been added in the last month or so. Toshio Hosokawa‘s Threnody to the Victims of Tohoku Earthquake 3.11 for solo viola, performed by Axel Porath, is quite an affecting piece. In the best sense, it begins like something of a dirge, based around and regularly returning to the same pitch. But over time it becomes more soaringly melodic, though with an air of desperation to it, as if compelled rather than merely ‘wanting’ to sing, its line broken up by aggressive, even angry, tremolandi. Klaus Huber‘s Winter Seeds, arranged here for accordion and string trio (it was originally just for accordion) is curious in the way it seems to push one away while inviting one in, concerned with sharp contrasts between canonic counterpoint and shifting chord swells, while Ulrich Löffler’s rendition of John Cage‘s classic Suite for Toy Piano from 1948 is the best i’ve heard of this piece, a lovely, lively performance where the timbre of the piano sounds genuinely magical, and the more you listen to it the more other-worldly it seems to become. Flautist Helen Bledsoe’s arrangement of Pierre Boulez‘s Dialogue de l’Ombre Double for flute and tape is wonderfully effective, vividly living up to the dialogue of the title, both in the aspects of ‘conversation’ that comprise the structure of the work as well as the relationship between the live and prerecorded elements. There’s an uncanny quality to the tape part that reinforces this, combined with an intensity in the live flute part that makes Bledsoe sound like someone who regards silence of all things most to be feared, responding by filling it with an unstoppable slew of decoration and embellishment. Another highlight is Johannes Julius Fischer‘s Ballroom, Lee Plaza Hotel (The Ruins of Detroit), a work for “amplified violin with reverberator and e-guitar playing drummer” that moves from the apparent sound of metal sliding against metal into a warm ambient soundscape where pitches jar prettily against each other, coloured by tremolos from the viola and, later, sharp chiming accents, before ending similarly to how it began. A complete list of the pieces released on Label Musikfabrik is available here, and for those who wisely want them in lossless format, the most recent additions can be found on Qobuz.

For all one’s love of it, listening to contemporary music can be tough, difficult and at times downright bizarre. Yet both in the concert hall as well as on their recordings, Ensemble Musikfabrik have an exceptional gift for making the experience, if not always accessible, then at least inviting and engaging, and at best, weird and wonderful.