The next piece i’m looking at in my Lent Series celebrating the music of Rebecca Saunders is something of an exception on 5:4, as it’s a work i’ve written about before. Saunders’ violin concerto still dates from 2011, and i explored the piece six years ago, following its first UK performance at the Barbican in February 2012. The world première, performed by the same forces – soloist Carolin Widmann and the BBC Symphony Orchestra, conducted by Sylvain Cambreling (Lionel Bringuier directed the UK première) – took place several months earlier, on 29 September 2011 at the Beethovenhalle in Bonn, as part of that year’s Beethovenfest. It’s fascinating to return to this piece and appraise it afresh, both from the perspective of that alternate performance as well as with regard to Saunders’ other work.

Once again – it’s tempting to say ‘as ever’ – Saunders draws on Samuel Beckett for inspiration: the title of the work comes from Beckett’s short story Still, the final lines from which Saunders quotes in the preface to the score:

This is expanded upon in Saunders’ usual way through having meditated upon the meaning and connotations of the word ‘still’, which she likens to “unchanging, ongoing, with an exhausting insistence, always, in essence, the same”, “stasis … two starkly contrasting states, in a fragile state of equilibrium” and “the framing of sound with silence, of ‘stillness’ imagined – silence being an endless potential, waiting to be revealed and made audible”, leading to a behavioural character summarised as “pulling gently on the fragile thread of sound, drawing out from the depths of imagined silence; or alternatively, sound erupting from the stasis of relative silence”.

i didn’t use this word to describe the piece before, but still is in essence a diptych, exhibiting a sharp, almost complete, contrast between its two movements. It’s easy to perceive them as being paradigms of the twin facets of much of Saunders’ work, one fiery and hostile, the other restrained and withdrawn, though hearing them alongside each other like this is revealing as to how much these two modes of expression complement and, in fact, overlap each other. 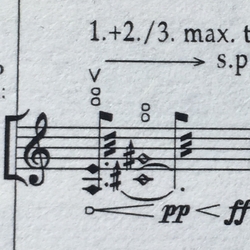 The first movement is brisk, without a specific performance direction, and bears a superficial resemblance to the relentless, aggressively dogged behaviour prevalent throughout traces. Instead of being fixated on a pitch, though, in keeping with most of Saunders’ more recent work the focus here is on a small gesture – a double-stop perfect fifth harmonic trill, with a rapid crescendo (see left; click to enlarge) – which forms the core and the grain of the soloist’s material, while also, in various similar guises, becoming a preoccupation of the orchestra (especially the strings). That much is obvious, but to my mind there’s an equal if not more pervasive and ultimately telling obsession at play in still. The violin has a distinct pull – indeed, a yearning – towards melody, and we hear this barely a minute into the piece, when the soloist’s glistening, rapid-fire opening gestures, punctuated by gruff rumbles and accents from the orchestra, give way to a sustained, expressive rising minor third. It’s an exquisite, tender moment, swiftly lost in the ensuing maelstrom, but it’s a glimpse of something that will become ever more significant as the work progresses.

We hear it in the extremely elastic way Saunders handles the first half of this opening movement, moving back and forth between seemingly unstoppable forms of tutti textural abrasion and sustained moments of repose, some of them coloured with lovely but strange shimmering chords. They become less frequent through this movement, though, both violin and orchestra becoming ever more wild and hectic. Despite the volatility of the music, it’s too easy to suggest the relationship between the orchestra and the soloist is similarly disruptive; after all, the violin’s starting position arguably triggered all of this, and there are occasions later on when it’s the violin that ramps things up with the orchestra clearly responding in kind. However, at the same time the levels to which the violin freaks out – that opening gesture turning into lengthy, seemingly uncontrollable spasms – plus the poignant return of the rising minor third later in the movement make the case for this musical outcome perhaps being less than desirable or comfortable. Certainly, the soloist is crowded out on two occasions, swept aside a little under halfway through by robust, imposing brass (is there any other kind in Saunders’ orchestral music?) and smashed to pieces by clattering percussion coils towards the end. Whereupon shimmer, drone, rumble, pause.

The second movement – marked ‘Dark, fragile, warm’ – is ostensibly light years away from this, but it initially picks up in precisely the same place: rumbles, blunt impacts, strange chords and the strings infected by that same opening gesture. Though when the violin emerges from this, it’s on a single note that becomes the starting point for an entirely different behavioural mode, finally indulging the melodic impulse previously only expressed in the most fleeting of wistful asides. This brings clarity to the relationship between the soloist and orchestra, as this total change in the violin is not merely mirrored by everyone else, but extends to melodic dialogues with various players, a collaborative effort of an altogether more lyrical persuasion. The violin freaks out again, but this time the response is a calming one: dense gleaming clusters and small explosives that seem to quell this instinct in the soloist. Restrained and beautiful, the second movement undergoes a kind of inverted climax, the violin soaring more and more, the orchestra swelling in response, but Saunders keeping a firm lid on everything: ever closer to falling back into silence, yet ever more impassioned.

There’s not the same level of contrast between the world and UK premières of still as there was between the various performances of traces, but to my mind there’s greater clarity in this performance – especially in the solo violin part: the microphone must have been placed incredibly close to Widmann – and it’s slightly brisker overall. The undertone of lyricism running through the work is perhaps teased out a little more in the UK première but i prefer the way it’s more emphatically suppressed in this performance, which makes the second movement more of a revelation. Either way, still is a work of enormous drama, avoiding the ‘one against many’ concerto cliché in favour of a grappling with polarised states of mind and their concomitant modes of action.

Still, as in unchanging, ongoing, with an exhausting insistence, always, in essence, the same.
Fragments, each time slightly varied, gradually create a single image. Imprints reiterated and projected into time and space. Like a giant mobile seen from many perspectives, that in itself remains untouched. And light changes, the focus, and the position form which perceived, is altered, as is nearness and distance to the object – a manifest complex protraction of the one single thing.

Still, as in stasis, explores two starkly contrasting states, in a fragile state of equilibrium.

Still refers to the framing of sound with silence, of “stillness” imagined – silence being an endless potential, waiting to be revealed and made audible. The act of composing being to unveil, make visible. Pulling gently on the fragile thread of sound, drawing out from the depths of imagined silence; or alternatively, sound erupting from the stasis of relative silence.

Still is also the title of a Beckett short story, which ends with the following:

Beckett’s Still sketches a single situation: turning the head towards the setting sun, the unknown protagonist watches night fall, darkness gathering; then head placed slowly and carefully in hands, waiting, as darkness unfolds, for a sound. As if in eternity; a timeless melancholy,curtly and brutally honest, yet imbued with a humanness, a softness. A stasis; the human body waiting, trembling.