The Tolmen Centre, Constantine: Kevos – From this world to the next

The extent to which contemporary music is well-represented in ‘the provinces’ of the UK, away from major cities, is extremely variable and in the case of Cornwall it’s not really pushing a point to describe it as being almost non-existent. Kevos (Cornish for ‘contemporary’), a six-piece ensemble formed in 2016 by Patrick Bailey (who directs the group) and dedicated to new music, is therefore not merely an honourable exception to the rule, but something altogether more rare and vital. Nominally based in Truro, in the middle of Cornwall, Kevos take a peripatetic approach to their concerts, performing as far afield as Newlyn to the west, Falmouth to the east and the lovely Kestle Barton arts centre to the south (not far, in fact, from the most southerly point of the British mainland). Kevos’ geographical scope is matched by the repertoire they take on, which in the last year has included music by Steve Reich, Alison Kay, Berio, Charlotte Bray, Richard Causton and Judith Weir. Kevos clearly set their sights ambitiously high, and deserve huge amounts of kudos and encouragement for what they’ve achieved thus far.

A few nights ago i was fortunate to catch the last concert of their current season, titled ‘From this world to the next’, this time taking place at the Tolmen Centre in the tiny village of Constantine. Kevos’ concerts occasionally feature electronic music alongside instrumental works, and they opened with Jonathan Harvey‘s Mortuos Plango, Vivos Voco. Whenever i’m about to be confronted by this piece – so familiar and, composed in 1980, increasingly un-contemporary – i instinctively wonder whether it has anything left to give. Personally speaking, i’ve heard it in practically every possible context, both in concerts and at home, in small halls and vast spaces, through speakers and headphones, in its original 8-channel version and condensed down to stereo. Yet when the piece plays and the bell and the boy sing out once again, i find that that familiarity is at once reinforced and completely undone. Somehow it continues to speak with incredible freshness and vitality; despite its 38 years of age, it could almost have been composed last week. Furthermore, despite not having the finest of sound systems, its rendition in the Tolmen Centre – heard in its full, 8-channel glory – was nonetheless compositionally crystal clear, demonstrating Harvey’s sense of inquisitive play in his treatment of harmonics and morphemes, as well as the work’s sublime balance of densities and registers. The polarised conclusion, high cluster-chords intoned over the low tolling bell, was so striking it suggested that not only does Mortuos Plango, Vivos Voco have plenty more to give, but that we never really know the piece in its entirety; just like all those complex overtones of the Winchester bell on which the work is based, there’s always so much more to be discovered within. 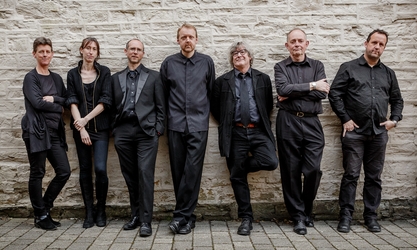 In hindsight, while Harvey’s piece does have a kind of palate cleanser quality to it (something i’ve noted previously), positioning it at the start of the concert set the bar very high indeed, presenting quite a challenge to the remaining four works on the programme. Missy Mazzoli‘s Still Life with Avalanche worked well, moving back and forth between bouts of driving rhythmic momentum and exquisite stillness. Despite the proximity of the material to minimalism (both harmonically and rhythmically), the way Mazzoli forcefully pulled it around, maintaining it while at the same time undermining it, kept it interesting throughout, flecked with splashes of oblique harmonic colour and almost tripping over its irregular metric underlay. In the midst of such energy those periods of stillness became increasingly mesmerising. Much less impressive – the low point of the evening, in fact – was Steve Reich‘s Double Sextet, performed by Kevos along with the recording by Eighth Blackbird. A dismal, tired rehashing of hackneyed ideas at any rate, it wasn’t helped by this performance which for the players was clearly a stretch too far. Only in the slow middle movement did Kevos feel truly in command of the music; elsewhere they were simply making a valiant attempt to keep up. However, these struggles were no match for the more fundamental woes that permeate this terrible composition, yet another of Reich’s that never, ever shuts up, that has no space or capacity to breathe, becoming a relentless act of sonic oppression. Once upon a time, quite a long time ago, Steve Reich’s music was genuinely exciting, but stuff like this is the equivalent of canned laughter: bottled, ersatz excitement that’s, at best, exhilarating to watch, but entirely moribund at its core.

Jonathan Woolgar‘s Sextet (given the somewhat icky subtitle, borrowed from James Joyce, ‘Lump of Love’), received its world première at the concert. According to the composer, the work is based around a ‘motto’, itself based on a phrase by Joni Mitchell. While i don’t know the song from which it was taken (‘Both Sides, Now’), it was tough to identify this motto as Woolgar set to work twisting it into new forms and shapes. Evidently he was escorting it through a sequence of contrasting episodes, which in turn meant the work lacked a strong sense of continuity or connection. However, neither of these issues felt over-problematic, as the work spoke as a fun series of unpredictable stylistic gear shifts – which is not to suggest it was in any way polystylistic (apart from the motto, nothing else was begged, borrowed or stolen from anywhere else), but rather multifaceted. This resulted in an interesting kind of engagement whereby the previous episode would be reappraised in the light of the present one, and vice versa. A piece that speaks most coherently at its surface rather than over the longer term, at its best there were some really quite beautiful moments. 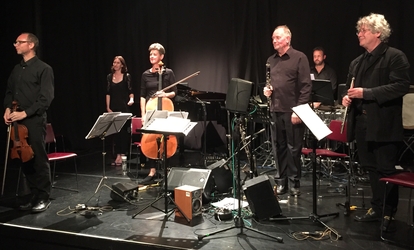 In the past i’ve had some issues with some of Joanna Bailie‘s works involving field recordings, but Kevos’ performance of her Artificial Environments 1–5 not only clarified my reservations but also, for the most part, managed to overcome them. Bailie’s five little worlds have never seemed as anthropological as they did here, the composer’s solemn voice, heard on tape beforehand, explaining with clinical indifference the nature and consequences of each one, in which the players very obviously take the role of ‘inhabitants’ (Bailie’s word). A field recording underlies each of the ‘environments’, sounds from which are traced, imitated and extruded by the ensemble, an effect that works best with one’s eyes kept shut, nicely encapsulating the players – occupying the centre stage – within the confines (and that is what they are) of the speakers on each side of them. An interesting aspect of these environments is the extent to which their artificiality, acknowledged in the title, is apparent. The first three exhibit considerable transparency in this respect, almost ‘hands off’ from a compositional perspective; no. 3 was very effective, the players’ seemingly half-trapped in amber, emanating suspended pitches only with difficulty. By contrast the final two environments assert direct authorial control, cutting up material to obfuscate its narrative in no. 4 (though presenting it intact beforehand seems tantamount to cheating) and undermining the continuity in no. 5 by subjecting its material to increasingly violent fades in and out. No doubt helped by the relatively small size of the Tolmen Centre stage, Artificial Environments 1–5 proved to be a fascinating exploration of how sound can define an entire world.

In addition to conducting the ensemble, Patrick Bailey also briefly introduced each piece, and considering the audience was evidently a mix of people with widely differing experience of contemporary music, his warm enthusiasm went a long way to making the concert not just good but great. Not everyone likes this kind of talk within a concert, i know, and it doesn’t suit all contexts, but on this occasion it could not have been more ideal.

What Kevos is doing in Cornwall is important and impressive, and on the strength of this they’re clearly an ensemble to keep a close eye on. In addition to their website, they can be followed on Twitter and Facebook.

Coincidentally in St Ives for the bank holiday whilst reading. Sounds like a great concert and good to see Patrick Bailey taking this on – have very much enjoyed working with him in the past.