This year’s Proms season kicked off on Friday evening with a concert featuring a major new work from Anna Meredith. Titled Five Telegrams, it’s a work that continues a thread that’s been running through mainstream British culture for the last few years, commemorating the events of the First World War. As the title implies, the piece takes its inspiration from telegrams sent back and forth during the conflict, its five movements focusing on different types and contexts for these telegrams, also featuring specific instrumental groups: newspaper spin (10 trombones), field service postcards (choir), redacted information (four euphoniums), codes (6 trumpets and percussion) and the armistice (tutti).

A recurring question i found myself considering during the piece was the extent to which this layer of extra-musical inspiration had an unambiguous bearing on the music. Underlying conceits and metaphors will always manifest themselves in ways that aren’t merely subjective but impossible to rationalise, and in the case of Five Telegrams Meredith’s inspirational starting point made its presence felt to widely differing degrees and depths. 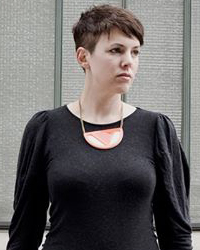 The first thing to say about the piece, looking at it as a whole, is that it manages to go further and deeper than one usually encounters in Meredith’s work. Style has always counted for a great deal more than substance in her music, and while her creative instinct towards big, obvious gestures that are as impossible to miss (or misunderstand) as a sucker-punch to the face still permeates a lot of Five Telegrams, there are times when she channels and focuses it to ends that are impressive and ultimately meaningful.

The opening three movements suffer from their wholesale adoption of the most basic filmic tropes, the first exploring over-familiar minimalistic textures that could accompany (and, indeed, have) any number of movie montages, the second using the particular kind of film score romanticism that has been a Hollywood staple for years. To be fair, the latter part of the first movement, where Meredith places a trombone melody within the texture, is very nice, and the second movement – the only vocal movement in Five Telegrams – is nowhere near to the barf-inducing combination of cheese and sugar that someone like Eric Whitacre force-feeds down audiences gullets. Yet while it would be pushing it to say Meredith did a disservice to the words, emerging from century-old postcards sent by servicemen, the hackneyed nature of her musical language here certainly diminished their power. Quite what the third movement had to do redacted information was anyone’s guess, as its simple, plinky-plonking kind of underscore sounded about as neutral and aloof as any music could possibly be.

The piece spoke with more originality and authenticity in the final two movements. The huge swinging, ‘oom-pah’ opening of the fourth, focused on code-breaking, didn’t seem that promising, but in two related respects Meredith made it something special. First was in its dogged, in-your-face bloody-mindedness – not so much ‘V for victory’ (yes, i know that’s actually WWII) as flicking the Vs at everyone, and second in the sustained, palpable energy that both drove along and was projected outward by this movement. Again, what it had to do with codes is debatable, though it was hard to hear that climax as anything other than a swaggering splurge of (perhaps cryptographical?) triumph.

The fifth and final movement is easily the best thing of Anna Meredith’s i’ve heard to date, beginning from an introspective meditation initiated by a solo cello, developed into a gentle rumination still located within a fairly small melodic space. But this is soon liberated – in every way that seems like the right word – by the violins, who expand this idea and give it increasing amounts of scope and momentum. In no time at all we’re confronted by the biggest and brashest climax in all of Five Telegrams, but with none of the bluster or bravado from earlier, and in this respect being the closest the work comes to really engaging deeply with its war-inspired origins. Armistice is not an end to conflict, but at best the beginnings of an end, and Meredith’s conclusion could hardly be more fittingly equivocal, opting for neither a lofty peroration nor fist-pumping grandstanding, but a much more aggressively complex outpouring: protracted, hugely dissonant chords expressing ecstasy and agony at the same time. It’s a marvellous, poignant way to end the piece, though it makes one wish those earlier movements had done something more meaningful and personal with such emotionally-potent extra-musical ideas.

The world première of Five Telegrams was given by the BBC Symphony Orchestra, BBC Proms Youth Ensemble, BBC Symphony Chorus and the National Youth Choir of Great Britain, conducted by Sakari Oramo.

Don’t forget to express your opinion about this and every Proms première on the Polls page. Once again i’ll be exploring the results at the end of the season.

I haven’t heard the work, nor, having heard other works by the composer, do I wish to, but if I did, the care with which you addressed its makeup would incline me to keep my seat a while longer—a considerable achievement, thank you.

Thank you John, i appreciate the kind words. i wouldn’t necessarily agree that Five Telegrams is “all about the music” as it does contain a visual element, though it can certainly be reviewed in purely musical terms, and in any case, i suspect the work’s future life (if it has one) won’t necessarily involve always being performed with the visual element included.

Thanks for your insight. Having seen it on Thursday night in Hyde Park with the film projection onto the outside of the RAH, I think it is important to stress that the music and film were conceived together (according to the programme). There’s no mention of the film at all here, which is rather missing a lot of the point of the piece. I presume you heard it on the radio. The BBC have put together a complete performance drawing on video from Thurs and Fri night, inside and outside. Well worth a watch!
https://www.bbc.co.uk/iplayer/episode/p06cnyf6/bbc-proms-2018-anna-meredith-five-telegrams-sender-receiver

Thanks for the comment, Tim. Yes, of course i was aware of the visual element of the piece, but i’d argue that focusing only on the musical aspects – you’re right, i listened on the radio – isn’t missing the point at all, unless Anna Meredith believes her music can only ‘work’ when heard in conjunction with the visuals (i can’t imagine that she does). As i said in the article, i was interested in exploring the extent to which the programmatic elements of the piece impacted on the music; it’s entirely possible that the less impressive earlier movements might have made a better impression if i’d seen the visuals too, but would that make the music ‘better’? That’s a rhetorical question to be honest, as a) it applies to all music conceived with a visual element (including all film and TV scores) and b) it’s entirely subjective. i’m certainly going to take a look at the online video when i get a chance, but it was pretty clear from the lengthy preamble discussion on the radio what it consisted of.

(FWIW, I’m a big fan, and have been since we first crossed paths at Gaudeamus 15 or so years ago. This one wasn’t by any means my favourite piece of hers, but she’s capable of some incredibly impressive, thoroughly enjoyable, and utterly joyful music (and I don’t mind admitting that seeing and experiencing that joy has moved me to tears more than once, over the years, most notably seeing ‘Hands Free’ for the first time as part of the 20×12 concerts). There are some fantastic tracks on her recent-ish pop album, and ‘The Vapours’, in particular, is incredible (worth seeking out the live version from their Tiny Desk Concert in addition to the music video (which is astonishing) to see just how infectious the smiles and enjoyment are), and ‘Nautilus’ is great, too. (It strikes me, reading not just this review above but also the one from a few years ago for ‘Smatter Hauler’ (which I also apparently enjoyed much more than you did) that it’s important to actually _see_ these pieces performed—it’s a big part of their energy and their playful fun.) Anyhow, she’s very good at what she does. And it’s personal and authentic, which is the best thing I think I could say about anyone’s music.)

It’s a fantastic sound and the lighting effects are stunning, but what has it to do with the ‘all-purpose’ First World War postcards on which it’s meant to be based? A piece d’occasion, and an effective one, but I’ll be surprised if it’s ever heard again. The Edinburgh Festival performance was nothing more than the recording of the Proms performance (except for new lighting to fit the Usher Hall) with a few live people planted in the crowd for some reason I didn’t quite understand. Hope the original performers all got nice big repeat fees – money for old rope, otherwise, eh, Anna?

Another thought: the strangely unbalanced nature of the piece, particularly the voices in the second movement that are never heard again. The expectation surely is that they will reappear in the finale to give the piece some degree of roundness, or sense of completion? Otherwise their earlier appearance is rather pointless … (And the point of the original postcards is the words!)