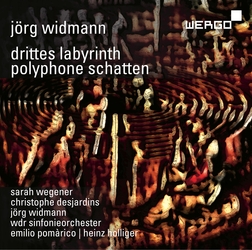 Wergo has recently released a new disc featuring two works by Jörg Widmann, performed by the WDR Symphony Orchestra conducted by Heinz Holliger and Emilio Pomàrico. Polyphone Schatten (‘polyphonic shadows’) dates from 2001 and features a clarinet and viola as soloists, played by Widmann himself and Christophe Desjardins. Despite the levels of activity displayed in the piece, it makes more sense to talk about restraint, as one of the most striking aspects of Polyphone Schatten is the way Widmann matches the rapidity that typifies much of his material with incredibly soft dynamics and articulations. That’s not exactly the work’s default position, but it’s a sort of ‘comfort zone’ to which the music regularly returns, often to the point of near-inaudibility due to being either extremely staccato or moving with quicksilver velocity. In terms of relationships, the soloists are clearly in cahoots with each other, while the orchestra seems to behave by way of response to their activities, often in a supporting or imitative role but occasionally growing a pair and asserting itself in wonderfully wild fashion. For the most part, Widmann avoids conventional dramatic highs and lows, favouring quantities of detail rather than sheer weight and mass, though two climactic passages later on are remarkable in respect of how unexpectedly they emerge and how enormous they sound in contrast to what’s gone before.

Drittes Labyrinth (‘third labyrinth’) is more recent, composed in 2014, and to an extent i’m still trying to get my head around it. The orchestra, acting as a collection of groups rather than a homogeneous whole – an approach also taken in Polyphone Schatten – is joined by a soprano (Sarah Wegener) whose involvement is more as a highly dramatic focal point or figurehead than as the communicator of a straightforward text or narrative. Lasting three quarters of an hour, Drittes Labyrinth is a piece that really takes its time, which makes the first 20 minutes or so feel like Widmann is dragging his feet. That’s not to suggest there’s little of interest going on: very far from it indeed, yet during these earlier stages of the work, due to how gestural and episodic they are, it’s difficult to form a longer-term sense of the music. It’s as if Widmann’s entire compositional attention was focused on the smallest-scale elements, with the concomitant effect that it sounds zoomed-in, and everything we’re hearing is minutiae. However, it’s only once we’ve passed through these formative, nascent passages (which is how they appear in retrospect) that the work broadens out, opens up and proceeds to release what is evidently a vast amount of pent-up tension. The trigger for this is an enormous eruption that comes from nowhere, leading to extremities of lyrical expansiveness that border on the operatic. Certainly the relationship between the soprano and orchestra (as a whole) suddenly becomes much more dramatic and erratic, veering between poles of halting introversion and rowdy, borderline hysterical outbursts. In one of the more memorable of these, featuring a sub-group of the orchestra comprising harps, cimbaloms, guitars and a zither, Widmann transforms them into a kind of demented gamelan.

All of this is exhilarating in the extreme, but for me it’s the lyricism that’s most striking in this context. As in Polyphone Schatten, here too Widmann seems much more interested in articulating things in moderation, tempering the overblown wildness with music that broods and contemplates, pulling back into drifting reverberation and shimmer, leading to a simply gorgeous vocalise from the soprano softly accompanied by strings. The fundamentally mercurial nature of Drittes Labyrinth means that passages like this are soon shattered and lost by a complete breakdown of the music into networks of gesticulations sometimes so rude they’re the equivalent of the entire orchestra giving the finger to the audience. But it brings about a marvellously strident final episode, like the opening of some grandiose ceremony, which makes the soprano’s subsequent unaccompanied closing utterances seem impossibly small and fragile, hysteria replaced by humanity. All in all, it’s as disorienting as it’s deranged, but Drittes Labyrinth is completely unforgettable, all the more so in this fantastically vivid recording.

[…] to a simply gorgeous vocalise from the soprano softly accompanied by strings.” (reviewed in December) […]