The most taxing challenge facing Reykjavík on Sunday was not, surprisingly, the -9°C temperatures permeating the city that day, but the evening chamber recital at the Fríkirkjan given by the group Kúbus. The day before, Georg Friedrich Haas had made 70 minutes feel like less than half of that; on this occasion, Kolbeinn Bjarnason made 30 minutes feel like 1,000. It was bad enough that he chose (possibly in an attempt at humour, but who can tell?) to preface his Musik der Unzeitlichkeit II with a 5-minute all-Icelandic spiel that appeared to be an anal-retentive description of each of the work’s sections – immediately followed by a two-sentence English version decrying how unnecessary the preceding spiel had been. LOL? Even worse that he saw fit to keep punctuating the piece with witless theatrics involving metronomes placed within glass recepticles that were then filled with water – one of which agonisingly took several minutes to complete. By comparison, the fact that the rest of the music consisted of the most generic and cliché-ridden gestures and ideas that one has heard a million times before felt only mildly irritating, but the sum total of the work was one of the most infuriatingly stupid, cheap, pretentious, pointless and creatively vacuous musical experiences to which I’ve ever been subjected. 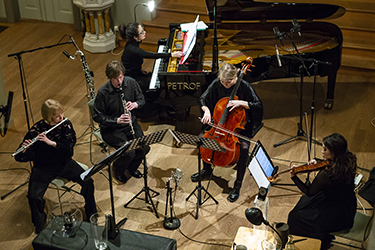 Haukur Tómasson should think himself lucky that his piece Unravelled was on the same programme. The work’s weak sense of direction and structure – staccato or sustained episodes following each other somewhat arbitrarily – eventually made some kind of sense, as the music was evidently deliberately being restricted from venturing too far. The way the players ended up going over the same kind of ground eventually just became tedious and irritating, yet in the wake of the Bjarnason that followed it, you could almost (but not quite) convince yourself retrospectively that Unravelled was in fact an essay in the most vivid lucidity and clarity. Context really is everything.

Infinitely less problematic was the afternoon concert at the city’s wondrous Hallgrímskirkja given by the Schola Cantorum choir, directed by the cathedral’s long-serving and much-lauded music director Hörður Áskelsson. It opened with two miniatures by one of the basses in the choir, Sigurður Sævarsson, settings of the Latin texts Ave verum corpus (a world première) and Diliges Dominum. Neither of them was radical or groundbreaking; they were, to put it simply, trifles, yet as examples of an art tightly bound by conventions of conformity and tradition, they were effective and affecting. In both cases, the soft lilting manner of the music, often rocking and oscillating between adjacent chords, indicated intense intimacy, as if the choir were not singing to an audience at all. And in the case of the Ave Verum (its bleak text interestingly set in a major key), it proved achingly potent.

The concert concluded with a work far more equivocal in tone, Alfred Schnittke‘s 1975 Requiem, the choir joined by the unlikely, idiosyncratic combination of trumpet, trombone, percussion, electric guitar, electric bass, piano and organ. The way Schnittke expresses himself in his Requiem is arguably less through the words themselves than through the way they’re (man)handled. It’s surely one of the most, if not the most, perfunctory Requiems ever composed, its various sections pared to the bone and for the most part avoiding any kind of lingering over them. Several movements are over practically as soon as they’ve begun. 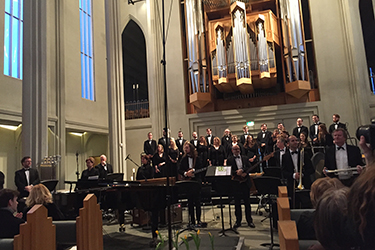 The way Schnittke approaches the text varies, but a recurring idea is to turn the words into stylised ritualised chants, some (Kyrie; Dies irae; Domine Jesu) projected through ever increasing levels of desperately impassioned clamour, others (Rex tremendae; Lacrimosa; Sanctus) articulated as solemn processionals, kept in step through a hammered out pulse. Episodes of more evidently free lyricism are rare. The Recordare is perhaps the only instance of this; elsewhere, flowing melodies are often made strange through oblique dissonance that surrounds them. In the opening Requiem movement, Schnittke tilts the music on its side having seemingly promised a world of serenity; in the Agnus Dei, leftfield chords both challenge and qualify the words, at times even drowning them out with soft clusters.

Nothing is conventional, everything is ambivalent. Well, maybe not everything: the Credo – a text not usually part of the Requiem – is rendered a statement of funereal conviction, a cry of belief from the midst of a desolate cortege that, finally, also breaks down into unchecked clamour. It’s a work that constantly veers between the determination and the inability to put faith in its words, an emotional battlefield of hope and doubt. It ends with no aspirations to Eternal Light or Paradise, only a repeat of the opening movement suggesting that, following a half hour of intense musical and theological wrangling, nothing at all has changed.

It was a mesmerising, at times terrifying performance, Áskelsson’s understated direction eliciting the most overwhelming outbursts of furious, semi-crazed chaos and barely-contained violent fervour. A world away from the empty, po-faced platitudes of Christian funeral rites, Schnittke’s Requiem forces us to stare at the reality of death, a mess of rage, anguish, disbelief and pain. I walked out of the Hallgrímskirkja shaken to the core.