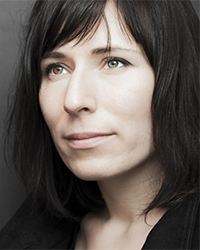 Being the first day of the season of Lent, today marks the start of the 5:4 Lent Series. This year, i’m going to be exploring works written for full orchestra, beginning with a piece by Estonian Liisa Hirsch. Hirsch is an intriguing composer; i’m still at a relatively early stage of getting to know her work well, but what i’ve encountered thus far suggests that, among other things, texture – or, more specifically, the way a texture changes over time – seems to be significant in her work.

That’s certainly the case in Lävi [‘threshold’] which i was fortunate to hear a couple of years ago during the Estonian Music Days. There’s a lot going on in the piece, but it makes most sense to speak of it in quite general terms. The title is all-important. ‘Threshold’ is an interesting word to use in a musical context as it indicates both stasis, referencing a fixed point, and movement, implying progression through or past that point with the concomitant suggestion of an ensuing effect or change in state. In the specific context of Hirsch’s music, it seems to me that the emphasis is put not simply on the duality but the liminality of this idea, focusing on the identity of material, the nature of change between identities and what constitutes the tipping point from one to the other.

Over the course of the work’s ten-minute duration, the orchestra explores a number of liminal states. One of the most obvious is where vagueness ends and clarity begins. The piece opens in faint, distant depths, and while it’s clear that some form of activity it taking place, Hirsch keeps it anonymous and nicely undefined. We hear traces and suggestions, nothing remotely concrete. In tandem with this is the boundary between noise and pitch. Clusters abound, the deep bass rumblings i’ve just referred to as well as, even more striking, strange agglomerations of higher register sounds that somehow remain indistinct, having all the solidity of clouds. For the first four minutes, Hirsch keeps the music at this liminal point, practically using it as a pivot upon which to flirt with the possibility of a tilt towards pitch and clarity. Details are there – a far-off, repeating clarinet; low harp notes; a string chord forming – but they stay elusive, like ideas trapped in amber, which undermines their identity and removes their agency: for now, they’re mere figments of something other.

It’s not until around the halfway point of Lävi that Hirsch applies pressure to this tilting. More and more suspended pitches force their way out, slowly transforming the nature of the music until it’s pitch-oriented, the ongoing low register rumblings now coming to resemble a slightly amorphous drone. Throughout all this there’s a real sense of orchestral totality, of all the instruments being an integral part of a single, large organism (bringing to mind the orchestral music of fellow Estonian Helena Tulve), manifesting communal traits and behaviour. As such, one threshold that’s not explored in Lävi is the one between the mass and the individual; aside from the way small-scale details are teased early on in the piece, the players act as one throughout.

However, one further threshold is explored. Around two-thirds through, the music appears to have arrived somewhere definitive, the pitch C swelling almost triumphantly in octaves. But while it sounds like some kind of grandiose final gesture, it instead proves catalytic, tipping the work over a new threshold from stability into volatility. These demonstrative pitches now sound eruptive, strained, forced; where before their undulating shape had a quality like slow breathing – each surge a steady exhalation – for a time they now resemble aching moans. As before, Hirsch keeps tilting the music around this liminal point, slowly quietening things such that the chords sound more radiant and the tremulous bass (which by now feels omnipresent) sounds like a kind of ‘noise floor’, the background hum upon which everything else plays out. As it finally dies away, becoming subsumed into this ‘floor’ (in the process once again blurring the distinction between pitch and noise), there’s just about a convincing sense that the orchestra has become aligned in octaves again right at the very end. This is the final threshold, the one between tension and resolution, and the music sits squarely across it, conveying neither and both.

This performance, the world première, of Lävi was given in April 2017 by the Estonian National Symphony Orchestra conducted by Kristiina Poska in the Estonia Concert Hall, as part of that year’s Estonian Music Days.

The sound environment of this piece is made up by quiet sounds – unison and twelve chords. All of these chords, however, in a traditional sense sound out of tune since they all consist of quarter tones. These chords are organized in a symmetrically increasing order and will build on all the steps of the scale starting with unison and ending with octave. A special playing technique on strings, which muffles the sound quite a bit as well as alters its timbre and pitch, creates an unpredictable harmonic structure for the piece. The chords will grow wider and the sounds become more audible and form unexpected sound combinations. In the second half of the piece there is suddenly the entire spectrum of all chords, from which the conductor filters out chords ad libitum and alternates between different sounding chords. As a result, a short-lived and unique sound environment forms until the journey of the chords will return to quiet unison.
In psychology, a threshold stands for the weakest stimulus that can be detected for the sensation. In physics, a threshold is defined as an entity or intensity that is necessary for a specific reaction, phenomenon or result to be expressed.