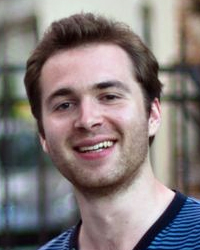 “You put structures in place, and then they kind of surprise you.” Words said by German composer Arne Gieshoff prior to the first performance of his orchestral work Burr. This seems entirely appropriate, since the piece takes its name and inspiration from burr puzzles, in which pieces of wood are arranged to form complex interlocking geometric shapes. In his piece, Gieshoff has sought less to suggest the geometry than the complexity, and perhaps also more than a little of the frustration that can arise when attempting to solve these puzzles. As such, the work’s six-minute duration veers unpredictably back-and-forth between episodes of energy and enervation.

The result of these wild oscillations is that each successive episode tends to sound more extreme than its siblings. So the more energetic passages, which begin the piece, progress from sounding muscular and flamboyant – an exercise in blatant showing-off – to a more desperate and confused kind of activity. The trumpets in particular, wonderfully busy in these sections, increasingly take on the quality of a bunch of mad birds chattering randomly away at each other all at once, while the percussion seem obsessed with filling their bars with ever more crashes and splashes. Another way of putting it, and it’s perhaps an odd word to use, is that there’s something dutiful about these episodes: gradually less about a simple display of energy than the compulsive need to appear to be energetic. It’s a subtle and fascinating shift.

Interspersed with these are their polar opposite, sections where Gieshoff could hardly make the music more vague. Perhaps for that very reason, these are by far the work’s most mesmerising passages. Mumbles, rumbles and growls, with a curious sense of Shepard tone-esque rising running through the material, a strange hovering chord and a wraith-like melody combine to form a beautifully odd atmosphere. Its subsequent manifestations turn the piece even more inward, ominously undulating like a choir of dazed sirens, and, near the end, practically bringing the music to a halt with sparse splashes of sound heard in what appears to be encroaching darkness.

And then there are the leftfield twists along the way: a short-lived procession of grotesquery, all chirp and crunk and weirdness that eventually gets taken over by a bass clarinet; and the strange kind of suspension with which the piece comes to an end, neither powerful nor fragile but a mix of whisps and drones that, quite appropriately, brings the work to an entirely inconclusive end. Maybe this particular puzzle doesn’t get solved, but the attempt is exhilarating.

The world première of Burr took place in January 2019, performed by the London Philharmonic Orchestra conducted by Marin Alsop.