There’s something absolutely right about the bringing together of Norway’s Only Connect – a festival that, as its name implies, encourages one to question (inter)connections between ostensibly disparate musics – with Tectonics, Ilan Volkov’s peripatetic festival the name of which evokes fundamental, underlying bedrocks that continually meet, connect and rupture. Taking place last week in the city of Stavanger, in the south-west of Norway, it’s only the second time the two festivals have conjoined, and the results were often appropriately volatile. That being said, one of the things that struck me powerfully during the festival – and this echoes my experience of Only Connect last year – was its almost complete lack of ostentation. The impacts it made were frequent and deep, but there was rarely an overt sense that this is what was actively being sought by the composers and performers. i’ve long felt that a certain kind of nonchalance – by which i mean the avoidance (or at least, the disguising) of obvious signs of audience direction or manipulation – is essential to the most powerful musical experiences, and at Only Connect that was its prevailing character, and i’ve no doubt this was a major factor in making those impacts as deep as they were. 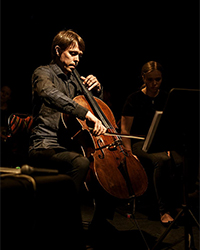 Perhaps the most telling example of this came from US composer George Lewis, whose music got the festival up and running, and two days later brought it to an end. The start came on Thursday evening in the form of Lewis’ cello and electronics piece Not Alone, performed by Finland-born, Norway-based cellist Ilmari Hopkins. When i first encountered this piece, at the performance given by Seth Parker Woods at HCMF 2016, the nature of the interaction between its acoustic and electronics felt elementary, but Hopkins’ rendition was vivid and three-dimensional. From the outset, it wasn’t only the festival’s title that was inviting the notion of connection to be probed, but Lewis’ title too: was the cello really not alone? Was the electronics active, an extension of the cello, a manifestation of one or many alter-egos, or even a response to the instrument – or was it merely a passive collection of episodically-reconfigured spaces and environments? However you interpreted that relationship, the spotlight it threw on the cello’s material was paramount, Hopkins progressing from short spasm-like phrases to an unconventionally beautiful kind of avant-lyricism that, in this particular context, often felt poignant. Returning to that central question, my sense was that the cello was, in fact, alone, interacting with phantoms conjured up in the multiplicity of imagined spaces created by the computer. Except then there was a time when the computer seemed to act first, which made everything uncanny and undermined that certainty. i think the work should be regarded as having an implied question mark after its title: ultimately, it’s a question Lewis leaves tantalisingly unsolved. 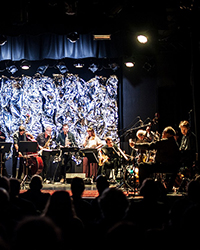 At the other end of Only Connect, last thing on Saturday night, Lewis joined forces with Stavanger’s Kitchen Orchestra for two large-scale ensemble works of his that posed parallel questions about the nature of connection in their materials. In both cases the music was improvised, emerging from pithy instructions on pieces of paper. In Artificial Life 2007 the Kitchen Orchestra came to resemble a cluster of rival factions taking part in a radical Battle of the Bands. There was a fascinating perceptional paradox at play: of calculated pieces sliding into place, yet at a time and in a way that was entirely spontaneous and responsive. All of which makes it sound like playing a game – which, in the best sense, is exactly what it seemed like, one where the players weren’t so much playing to or with one another, but at each other in an improvisational throwdown. This segued into the second piece, Creative Construction Set™, where the Kitchen Orchestra was even more engaged in game-like behaviour, though in a much more united way. Here, brief commands were thrown into the space ad libitum, impose on the players either individually, in groups or in their entirety. As such, the visual aspect of the piece was vital to the overall experience, seeing individual players sternly hurling commands to those around them (in Lewis’ case, followed by him showing the audience which command he had just used) and then hearing how the group dynamic shifted, introducing elements of imitation that unified the music even as it was being quite roughly manoeuvred. The way this game was played was as amusing as it was musically convincing, creating a seriously involving ebb and flow that, due to its complex combinations of timbre and behaviour, was often highly attractive. 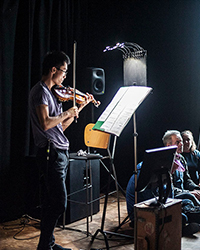 Another piece i was fortunate to be hearing for the second time at Only Connect was Sagittarius A* by Natasha Barrett. A work for violin and electronics, performed on this occasion by Jian Ren, when writing about it following its 2017 world première i remarked how further listenings would be vital “to really begin to penetrate and unpick its welter of fascinating details”. Part of this is due to the way Barrett’s electronics form such an overwhelming, intricate mobile environment around the fixed point of the soloist, but it’s extended further by the work’s sense of journey, akin to Christopher Nolan’s Interstellar, beginning in a place of calm and stability, within the quiet ambience of a forest, before making its way into ever more otherworldly soundscapes. Though Ren was a visual fixed point, his material was regularly flung into these environments, as if – along with the electronic sounds – it had been chopped into bits that were then exploded within fireworks. Later, Ren’s violin acted to, depending on your perspective, rein in the electronics or simply act as a counterpoint to their expansion, focusing the piece in a curiously awkward-sounding lyrical intimacy (the awkwardness was no bad thing, enhancing its character). But the violin could only go so far to counterbalance the amazing dazzlements of Barrett’s electronics, suspending us in a fantastical place of softly tinkling bells near the start, sending us careening through a thrilling, seemingly infinite vortex near the end. Every time i come away from a Natasha Barrett performance i find myself wondering whether anyone, anywhere, can top the genuinely breathtaking drama, beauty and power of her electronic music, and following this performance i’m definitely inclined to think not. 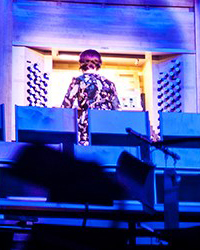 Where Barrett and Ren took us into space, Lauren Redhead and Alistair Zaldua took us into a similarly abstract evocation of the sea, in a late-night performance of Nemos Orgel by Ecuadorian composer Mesías Maiguashca. Performed in the sumptuous interior of Stavanger Concert Hall, the relationship between its electroacoustic elements was often so close as to be inseparable, Zaldua’s electronics at first sounding like nothing more than overtone colours from Redhead’s throbbing pedal clusters. As the textures became more elaborated, they were at times perceptible as dual components in a combined musical idea, the timbres of the electronics occasionally bringing to mind hints of Radiophonic or even B-movie loveliness that only added to the vibrancy of the work’s intense and never remotely predictable narrative. Having begun in the depths, Redhead ended up in the stratosphere of the instrument, concluding in an atmosphere of shimmering radiance gently jostled by brief final pedal notes. Of the various unknown quantities at this year’s Only Connect, Nemos Orgel was by far the most welcome and exhilarating, demonstrating again how unfortunate it is that the organ tends to be overlooked in the world of new music. 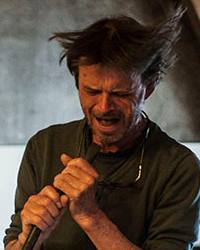 Two solo performances were especially memorable, and in the case of Belgian experimentalist Pierre Berthet, marvellously prosaic. In addition to creating an exquisite installation where a host of organic and inorganic materials were turned into loudspeakers, Berthet performed a short piece using nothing more than a vacuum cleaner and some pieces of metal piping. Having caused the hose to oscillate wildly but regularly from side to side (held in place with pieces of concrete), thereby creating both a pulse and a static form of bassline, Berthet carefully positioned the bits of pipe in its vicinity, leading to an assortment of pitched and percussive additions. On a couple of occasions – whether on purpose or accidentally it was impossible to tell – the hose broke free of its moorings, madly flapping at random in all directions like an insane improvisational solo, before Berthet wrestled it back into position. The last time this happened, Berthet grabbed the hose and sang its fundamental pitch back into it, causing him briefly to affect the demeanour of a rock god, his hair being blown by his makeshift microphone. The piece ended in the best possible way, when the hose itself collapsed and broke. Easily one of the most unforgettable performances i’m ever likely to experience. 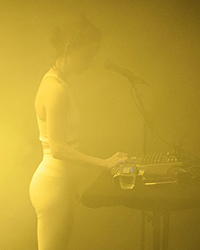 Having been impressed by Stine Janvin a couple of months ago at the Borealis festival, it was good to see her in action again. This time she stood alone in a large space, virtually impossible to see within a growing fug of dry ice and an incessant stroboscopic light display. The piece, Fake Synthetic Music, channelled her voice through electronics to create a mesmeric episodic tapestry of cycling loops and layers. Initially like being inside a cross between a Shepard tone and an ECG machine, Janvin’s vocalisations were omnipresent at every level, from the music’s core to its surface, yet frequently one lost sight of this as they became abstracted and transfigured into complex rhythmic arrangements that for the most part eschewed mid- and low-range registers in favour of intense, high-pitched textures. The sonic effect was perfectly married to the visual, the lights causing not only Janvin but other members of the audience to be visible only as the most momentary glimpses extended through persistence of vision, giving the impression that the space was filled with fleeting phantasms that evaporated the instant they appeared. Eventually incorporating deep bass elements at its very end, Fake Synthetic Music was fantastically engaging and immersive, all the more so due to the disparity between the high energy and passion of the music emanating from Janvin’s seemingly motionless, dispassionate body. It was ecstatic, and so was i.