The main focus during the five days of concerts at Forum Wallis was on ensemble and chamber music. An important and impressive feature of these concerts was their aesthetic diversity, not showing a marked preference for certain kinds of music-making. This resulted in extremely different – sometimes, practically opposite – works sitting side by side, providing a shifting and engagingly unpredictable experience. That being said, diversity of gender was overwhelmingly absent: just five of the 39 works performed during the festival were by women composers, a pretty bleak statistic that artistic director Javier Hagen would do well to significantly improve in future years. 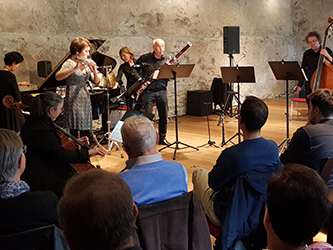 Three ensembles were featured: two visiting, one in residence. On the opening night, Freiburg’s Ensemble Aventure performed a programme focusing on Latin America. The only piece that overtly referenced this was Javier Álvarez‘s well-known Temazcal for maracas and tape, and while from my perspective the piece, despite its age (composed in 1984), has lost none of its freshness and vitality, it was interesting to compare notes with a trio of young Mexican composers (taking part in the festival’s Composer Academy) who clearly found it rather more irritating, particularly its (to my mind) amusing, folk-infused conclusion. Either way, percussionist Nicholas Reed’s rendition of the work was excellent, not merely meticulous but extremely elegant. Both Leonardo Idrobo‘s macchina and Graciela Paraskevaídis‘ sin ir más lejos positioned their materials with utmost care. For Idrobo, the music lived up to its name, turning Ensemble Aventure into a machine-like mechanism that nonetheless exhibited a great deal of spontaneity and caprice; Paraskevaídis’ music was more emotionally-charged, caught between seriousness and volatility, never sounding portentous but packing a lot of emotional weight that interestingly never quite resolved into something concrete. Quema, a trio for oboe, clarinet and bassoon by Natalia Solomonoff, was similarly conflicted, alternating harsh, dissonant tuttis with more thoughtful, inward episodes where the players all felt constricted, as if struggling to make any sound emerge from their instruments; it was all marvellously dramatic.

In a similar way to Paraskevaídis, Mariano Etkin‘s piano solo Lágrimas sobre lágrimas kept itself at something of a distance despite (or perhaps because of) its brooding sensibility; this was all the more enigmatic due to how earnest and heartfelt it seemed to be. In another trio, Cenizas blancas by José Manuel Serrano, cor anglais, bass clarinet and bassoon were made to feel closely related due to their continual behavioural similarities. There was something strangely compelling about its portentous lyricism, the music’s inner weight giving the weird impression of a kind of abstract heavy breathing. Broadest in scope was Jorge Horst‘s ensemble piece Crisoles, which came last on the programme and in some respects seemed to become a synthesis of all that had gone before. There was again a mix of remote abstraction and emotional heft, the latter even having the quality of a doomed protest, uniting the players in an outburst that sounded enraged yet despondent. One of only two occasions in the concert when Ensemble Aventure was assembled in full, the intensity and capacity of the music was enormous, and despite the sense of it being undermined from within, the absolute unity of the players made its anger overwhelmingly effective. 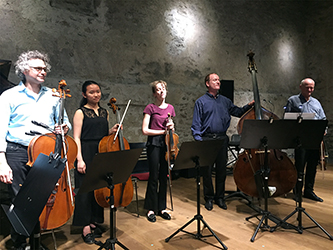 Swiss group Ensemble Contrechamps opted for a programme combining works from Europe and the United States. Pianist Lorenzo Soulès made three of the Nanosonatas by Frederic Rzewski a curious amalgam of motoric accuracy and tumbling mayhem. Nanosonata #39, To a runner was the most striking, an exuberant interplay of pensive hanging clouds and out of control runs like a toccata on steroids. Mauricio Kagel‘s Aus dem Nachlass increasingly felt like perhaps too much of a good thing, its serious and tongue-in-cheek evocation of existing music passing through by turns mournful, robust, overpressured (like an old squeezebox), cheeky, introverted, dance-like and grotesque episodes. While one was continually drawn to details – trying to parse what may or may not be lurking at its core – Kagel kept pulling one back to focus instead on character, creating an interesting back-and-forth listening experience that emphasised the wit and drama of its wide shifts in tone. Mark Barden‘s viscera had some arresting moments – most of them on the double bass, most memorably a faint kind of strangled ‘singing’ – but overall it was hard not to feel we had heard its particular brand of incessant chatter so many times before that it simply sounded rather generic and uninteresting. Leonardo Marino‘s new work We Told You What To Dream, receiving its première, felt similarly mundane, though this was partly due to how interesting it was when the piece let rip in grandiose tuttis. Elsewhere, by contrast, the piece seemed a bit too absorbed in noodling in relation to its prominent underlying pulse. The most engaging work in the concert was Lake Eden by Mary Jane Leach, performed by an expanded ensemble, the players dispersed throughout the Schloss Leuk space. Slowly growing from a single pitch – introducing in turn semitones, tones, fifths, thirds – the work in part resembled a large-scale meditative drone. Yet there was a fascinating imbalance to the music, which gained inner momentum, becoming a shared pulse, and the imposed pitches above and below in turn led to the sensation of a collection of melodic strands coalescing and meandering away. It was something like a cross between Éliane Radigue, Jakob Ullmann and Terry Riley, as if in the most delicate way possible the players were seeking to explore all possibilities and permutations while managing to maintain a sense of, if not exactly equilibrium, then stability, remaining fundamentally connected to each other. Composed in 1986, it seemed completely timeless. 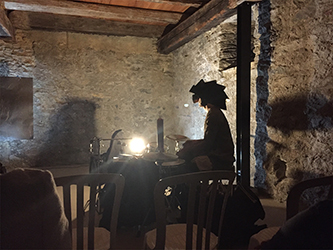 In addition to the ensemble concerts i can’t fail to mention a remarkable small-scale event that took place in the lugubrious bowels of the castle. This was the world première of HOR, a new chamber opera by Spanish composer and percussionist Luis Tabuenca. Based on the story ‘My Name is Hor’ by German fantasy writer Michael Ende, the work features three musicians – Ilona Schneider (soprano), Ana Parejo (saxophone), and Tabuenca himself on percussion – who together represent the figure of Hor (bringing to mind the similarly tripartite characterisation in Anna Þorvaldsdóttir’s chamber opera UR_). No translation of the German text was provided, though to an extent it didn’t matter since the work was clearly taking a non-narrative approach, seeking less to portray Hor than to refract his essence, so to speak. Beyond that, it’s impossible to speak in specifics about the dramatic content, but musically, Tabuenca’s percussion work was absolutely mesmerising, never remotely showy or unnecessarily convoluted but exquisite in the fastidious care of its execution, incorporating an incredible variety of completely unexpected sounds from the most unlikely of sources. Standout moments included a wonderful duet with Schneider where Tabuenca echoed her falling motif via soft groans elicited from a drum, and his making a thunder sheet ‘sing’ in the most improbable, spine-tinglingly lyrical way. Parejo had her own opportunity to shine later on, delivering an enthralling lengthy solo, full of fluttering, that culminated in an incredible sequence played into a bowl of water, producing a delicious and weirdly poignant sequence of sonically inscrutable bubbles. 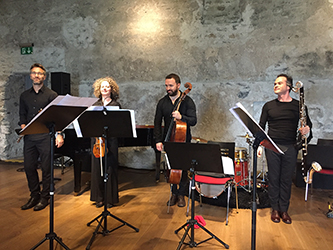 In residence for the duration of the festival was Zafraan Ensemble from Berlin, who in addition to presenting three concerts at Forum Wallis also worked with those taking part in the Composer Academy. The aesthetic diversity i mentioned at the start was nowhere more evident than in these concerts, ranging from the most intricate, energetic complexity to music of almost immobile stillness. Somewhere between these extremes were the Serigraphien by Johannes Schöllhorn, which took as their starting point material by Fauré. In Schöllhorn’s hands, the members of Zafraan were transformed into the cogs and wheels of a collection of elaborate clockwork music boxes. Sometimes they were glassy and crystalline, robbed of vibrato and rubato, articulating nothing but metrically precise pitches; sometimes the mechanisms were more kinked and quirky; and sometimes the machines allowed the notes to flow more briskly, in the process exploring simultaneous paradoxes of motion and rest, progression and stasis. At all times, the effect was eerie, as despite its often robotic delivery the music was ravishingly lovely and serene; to be caught between such a collision of authenticity and ersatz was genuinely uncanny. By contrast, Stefano Gervasoni‘s Least Bee was flat, tedious and irritatingly superficial, at no point suggesting there was anything more beneath its terminally tremulous surface. Caspar Johannes Walter‘s Fünf Ohren had a lot more going for them, creating beautiful atmospheres that were unsettling yet inviting, even when lurching into obliquely grotesque territory. Particularly interesting was the way Walter made the players’ individual sounds complementary without them needing to be sympathetic, resulting in discrete, fizzing small-scale tensions, all the while making the music oscillate between being apparent solid and vaporous, distressed and ecstatic. 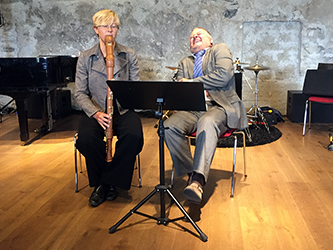 It was at these Zafraan concerts that i heard not only the best music at the festival, but witnessed some of the most dazzling performances i’ve ever experienced. They came in the form of three different duets, all of them involving the consummate vocal skills of Forum Wallis’ artistic director Javier Hagen. For Beat Furrer‘s Invocation VI, Hagen and Zafraan flautist Liam Mallett interacted with such intense intimacy that Schloss Leuk suddenly seemed to become incredibly small. A scene taken from Furrer’s opera Invocation, the work’s abrupt fluctuations in character were all characterised by breath – either too much or too little of it. As such, pitch seemed almost a by-product of Hagen and Mallett’s actions rather than their primary intention, with the barest semblance of the possibility of song occasionally breaking through. The other two duets were performed with recorder player and Hagen’s long-standing collaborator Ulrike Mayer-Spohn. They managed to make Luis Codera Puzo‘s oscillation ou interstice even more intimate than the Furrer, to the point that the duo were often so quiet it was if they were playing privately to each other, oblivious to the presence of an audience. As such their joint articulation of the text –  a setting of French poet Irène Gayraud’s text ‘la porteuse de lance’ – was made gripping and tantalising, sounding almost out of reach despite being performed barely a few feet in front of us. Most stunning of all, though, was the duo’s rendition of Japanese composer Motoharu Kawashima‘s Das Lachenmann IV, a literally amazing essay in choreographed laughter. Mayer-Spohn’s recorder was inextricably integrated with Hagen’s vocalisations, the two combining to form a single voice not merely laughing but uttering a plethora of associated sounds, gestures, grunts, croaks, whines and wails. It was as absurd as it was utterly incredible.

As i said at the start of my previous article, it’s impossible to be aware of everything that’s going on in the world of contemporary music. But having now – finally, in its thirteenth year(!) – experienced Forum Wallis, i realise that it’s too significant, too ambitious and too triumphant in its commitment to the most weird and wonderful new music to be ignored. The festival’s home, Leuk, may be a small town, but each one of its concerts felt every bit as epic and momentous as the mountains surrounding it.