Performed last Monday by an orchestra combining students from the Royal Academy of Music and the Juilliard School, conducted by Edward Gardner, Anna Thorvaldsdottir‘s Metacosmos is a work i know quite well. Anna and i discussed it at length during our Dialogue together, and i explored the piece further following its first performance in Iceland during the Dark Music Days earlier this year. As i’ve noted on both those previous occasions, the work is somewhat different from most of the rest of her output due to its construction. Instead of opting for her usual kind of convoluted, unpredictable structure, Metacosmos is a complex but recognisable binary diptych, its latter section a refashioned – both shortened and lengthened – version of its former. The two sections are each set in motion via loud accents and a deep drone E, culminating some time later in a B-flat chord after which a melancholic melody emerges (in C-sharp minor the first time and B-flat minor the second time). That kind of structure is interesting in her work for all sorts of reasons, particularly when considering the inspiration for Metacosmos is to do with being “drawn into a force that is way bigger than yourself”, Anna citing the ultimate example of this as a black hole. 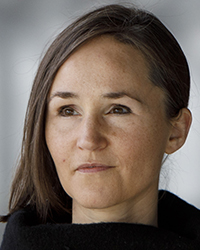 i once heard a physicist describe how one way of interpreting black holes was to think of them as the only places in the universe where all trajectories, regardless of direction or speed, all end up at exactly the same point, the singularity. That kind of inevitability seems to align very well with the way each of Metacosmos‘ sections ends up at exactly the same place, the only primary difference being the colour of their harmony. Though inspired by nature, Anna doesn’t set out to depict it in her work, but perhaps it’s not too fanciful to think of those sharp opening accents as a tipping point where we cross an imagined event horizon and our musical fate is sealed. How we get there is different: the first section passes through tremulous textures within which barely perceptible surges and details can be made out, petering out into swishing air noise later on; the second section is more mechanistic, drums and chugging rhythms marking the route. Both descents are caked in poignant downward smears from the strings, indicating that essentially nothing in Metacosmos can be regarded as stable: here, everything, everywhere, falls.

Whether or not that exquisite melodic epilogue is a wistful fragment of time impossibly stretched out – not so much a part of the process as a reflection upon it – is hard to say. Maybe, as in pretty much all Anna’s music, it’s simply an indication that at the heart of the most overwhelming, terrifying forces of nature in the universe, lies an incredible, unimaginable beauty.

I really liked this; at least on my second hearing. It really packed an emotional punch in the last 3 minutes or so. A mix of awe and a touch of melancholy? That’s what the hairs on my arm tell me!