A week ago, the Proms saw the world première of a new work by no fewer than 14 composers. Conceived by conductor Martyn Brabbins as a 60th birthday present to himself, the piece is inspired by, and modelled on, the structure and character of Elgar’s Enigma Variations. For this new work, Pictured Within: Birthday Variations for M. C. B., Brabbins selected a theme (keeping its origin a secret) as the basis for fourteen variations, composed by Dai Fujikura, David Sawer, Sally Beamish, Colin Matthews, Iris ter Schiphorst, Brett Dean, Wim Henderickx, Richard Blackford, Harrison Birtwistle, Judith Weir, Gavin Bryars, Kalevi Aho, Anthony Payne and John Pickard. (It’s impossible to ignore how much of a sausage-fest that is, but it’s Brabbins’ party so obviously he calls the shots.) The tempos and approximate durations of Elgar’s original movements are, with a few exceptions, generally retained in Pictured Within, resulting in a composite work that corresponds to the overall shape, nature and inner relationships running throughout the Enigma Variations.

The anonymous theme itself is quite striking, comprising a slow, angular string melody accompanied by small solemn chords, emphasising a rising and falling contour. This is answered by a strong tremolando surge that settles and finally resolves. In the ensuing variations, the extent to which this basic template is detectable fluctuates quite widely. Several emphasise its lyrical aspect. Dai Fujikura places his roaming meditation on the melody over an accompaniment that’s at once playful and serious, and he echoes the tremolando surge in an unsettling episode that sounds as if it’s from an entirely different world, turning everything on its side. Sally Beamish makes the melody nicely flippant, giving it primarily to a bassoon (and a slip-sliding trombone) to amusingly cheeky accompaniment, while Iris ter Schiphorst rather brilliantly renders the tune sweet and ominous at the same time, making its character feel wonderfully conflicted, enhanced by the restraint shown by the rest of the orchestra. Echoes of the theme are more elusive in Judith Weir‘s variation, which for the most part sounds as if she’s taken a collection of chopped up fragments of British Light Music that she’s then joined together into a weird little collage; it’s curiously interesting and even (unintentionally?) funny in its randomness, especially the preposterous final chord resolution. More than most, Kalevi Aho harnesses the angularity of the theme, making it so searching as to seem almost strained. Aho also echoes the theme’s strange tremolando event with an equally strange intense moment as if a distant but very bright light had been suddenly switched on, subsequently collapsing into a low rumble. Ending up in a polarised state (extremes of high and low), it just about manages to sound settled but Aho keeps the music tantalisingly equivocal, making it one of the more memorable of the variations.

Several composers transform the theme into rapid blurs of movement and colour. For David Sawer it becomes a rush of fast string figurations with occasional wind phrases overhead, for Colin Matthews a turbulent flash-in-the-pan that’s more about the totality than the individuality of its elements, and for Wim Hendrikx a boistrous, even obstreperous outpouring of driving, scurrying material that’s never quite allowed to properly let rip (no bad thing). Gavin Bryars creates a lolloping tutti, full of swagger, that abruptly turns in on itself – an unpredictable but effective switch into an altogether more pensive soundworld. John Pickard, tasked with bringing Pictured Within to a close, constructs something that functions both as a finale and as a potential fresh start, filling his music with a vast quantity of lightweight clatter and heavyweight poundings so animated that at times they sound almost cartoon-like. Though they each have their moments (the most noteworthy being Pickard’s introduction, right at the end, of the hitherto unheard Royal Albert Hall organ), the gestural nature of these movements diminishes both their sense of being ‘variations’ as well as their inherent interest – yet they nonetheless function as useful counterpoints to the music around them. 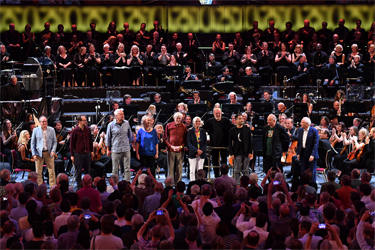 The most telling of the variations are the ones that expand most on the aspects of the original theme. Anthony Payne‘s practically breaks the confines of its definition as a variation, having a demonstrably symphonic demeanour that taps into the heart of the theme’s lyrical sensibility. Broad and majestic, beautiful and delicate, these four minutes of music are so impressive they’d stand up perfectly well if heard in isolation. Brett Dean, too, evokes a far-reaching musical expanse, made behaviourally discordant due to a tension between an impulse toward harmonic resolution and another ridden with halting anxiety. No solution, as such, is found, but the way the music becomes subdued, culminating in an emergent solo viola (Dean himself?) swallowed up in the depths, proves deeply emotive and poignant. And Richard Blackford‘s is another variation exhibiting remarkably wide scope, going further than anyone else in placing the uncomfortably angular line of the melody at its centre. Built around a simply ternary structure, its crude contour – passed among several solo instruments – somehow manages to climb over brief chords that barely accompany it, acting instead almost like increasingly rough shoves to try and keep the melody moving onward and upward. The nature of Blackford’s reconfigured version of the melody (which has something of a seductive noir quality to it) and its relationship with the rest of the orchestra are both seriously engaging, particularly when the music arrives at an assertive mini-climax that’s surprisingly full-blooded and passionate. Though lasting barely two-and-a-half-minutes, its impact belies its brevity.

But it’s the variation by Harrison Birtwistle – in the number 9 slot, and as such the contemporary ‘Nimrod’ – that’s the most stunning of the set. Perhaps it helps that he’s afforded almost the longest duration of all (at five minutes, only John Pickard’s finale is longer) but Birtwistle’s music is so deeply engrossing and immersive it almost breaks the sense of continuity. It doesn’t, in fact, instead forming an epic centrepiece for Pictured Within that, depending on your interpretation, is a point of elevation or deep depression. We’re lost in a place inhabited by low groans, the barest possibility of a tentative melody, and isolated notes from a far-off flute. It’s paradoxical, appearing bleak yet displaying warmth. Birtwistle, echoing Brett Dean, hands the tune to his own instrument, setting off a clarinet on a gorgeously lyrical episode, handing over for a time to a horn backed by thin streaks from the strings. Shiver-inducingly haunting and magical, it’s just glorious to behold. In due course, Birtwistle abruptly opens things out into a stratified music, demarcated by registral layers, but its clarity is militated against by the vagueness of its attitude and direction. Yet melody persists (now helmed by a trumpet), ultimately melting into a return of the low groaning from earlier, fizzling amidst high accents and strange low chuggings. Weird but unutterably wonderful.

It’s an ambitious and optimistic idea to take 14 disparate approaches to the same sliver of music, and to create something interesting and unified from them. Maybe using the Enigma Variations structure is the key to its success, but regardless, Pictured Within does indeed succeed, and on each new listen the connections between its variations become both more clear and more convoluted, the similarities seem more close and more distant. And against the odds, it all hangs together into something complex and really rather magnificent.

The world première of Pictured Within: Birthday Variations for M. C. B. was given by the BBC Scottish Symphony Orchestra conducted by the birthday boy himself, Martyn Brabbins.

Various - Pictured Within: Birthday Variations for M. C. B.

Approximate start time of each variation

love Birtwistle. shall try to listen.

Yes, it really does make for a surprisingly cohesive listening experience, almost as if one ultra-eclectic composer (maybe someone like Aho, in fact) had written the lot.

Love following your posts, particularly the annual BBC proms new works. Interestingly when it comes to the voting your readership almost unvaryingly agrees with you. Its almost always possible to guess the result just by reading your final sumation of each piece.

Love following your posts, particularly the annual BBC proms new works. Interestingly when it comes to the voting your readership almost unvaryingly agrees with you. Its almost always possible to guess the result just by reading your final summing up of each piece.

i think this tends to be most true in the immediate period after i’ve written each article, but then it often deviates a bit more as time goes on. Many’s the time a piece ends up being liked or disliked significantly differently from my own view. But it’s true that there are also many times when readers agree with my assessment.

What do you think about that? Personally, i’ve never really read too much into it, aside from it being a fairly basic agreement with the general cut of my critical jib.

I guess naturally avid followers of your blog are going to have musical tastes in the same or similar direction as your own. But I do probably feel that in general opinions tend to be swayed by the response of the critics. I guess it stands to reason when the whole point of reading a critical review is to gain some insight into whether something is any good or not, and it is always harder to go against the grain, especially when the other person really seems to know what they are talking about. I am not intending to level any criticism at your readership, it was just an idle observation over the past years.