Last week i was able to catch a couple of days of the shenanigans going on at this year’s Huddersfield Contemporary Music Festival. It was strange not to be doing my usual thing of setting up camp for the whole shebang, but quite apart from it being better than nothing, experiencing a festival in microcosm like this is somewhat revealing. More than perhaps most music festivals, going to HCMF involves becoming a prospector, panning for gold in its welter of content. Personally, i’ve tended to find the nuggets of gold to be relatively few and far between, but when you find them it’s usually a pretty overwhelming experience, easily among the most memorable i’ve ever had. This proved to be the case again this year: some was worthless, some looked like gold but on closer inspection was just superficially shiny – and every now and then the festival really hit the jackpot.

Apropos: Termite Territory, by composer-in-residence Hanna Hartman, receiving its first UK performance on Thursday afternoon by Swiss ensemble We Spoke. It looked at first glance to be a not particularly promising mucking around with close-miced bits of corrugated cardboard. However, its highly episodic structure – each episode involving a different approach to the way the cardboard was wielded by the five players – turned out to be deeply engrossing. 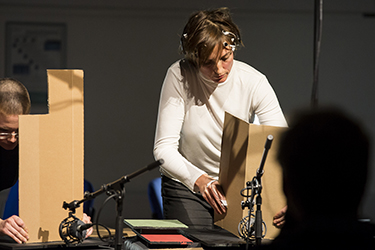 It was one of a number of occasions during my time at HCMF where i quickly found it was better not to look at what was happening, in order properly to grasp the complexities of the sounds and timbres emanating from the bits of card. They cracked, they swished, they croaked, they squawked, and most memorably, they elicited strange buzzing pitches when rubbed that improbably came to sound like a chorus of soft voices. Often, the gentlest action produced the strongest effect: the cracks, for example, produced by pressing down on the board such that it was barely visible to the eye, made it sound as if Phipps Hall were a deck on a seriously precarious boat, poised to founder. It was a fabulous, simple demonstration of the sonic wonders that can be made from the most basic of materials.

It’s worth mentioning, i guess, that the rest of the We Spoke concert focused primarily on pieces that fell more under the banner of performance art than anything else, with music in some cases only a peripheral aspect. While i’ve always found works like this fascinating in their own right, here they seemed beyond the recognisable scope of what is, after all, a music festival. The same could be said for other events in the programme. Ensemble Contrechamps’ performance included Barblina Meierhans‘ May I Ask You Something?, a bafflingly obtuse work in which music, for want of a better word, was little more than a by-product of its self-indulgent actions, and Deaf, not mute by Christine Sun Kim, a far more interesting work in the way it meditated upon – and, to an extent, illustrated – Kim’s personal experience of deafness, but from a musical perspective proved to be exceedingly feeble. 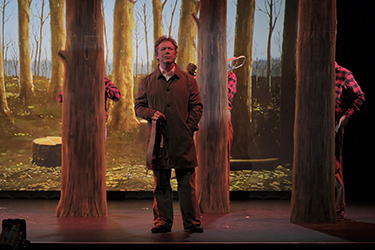 And it’s impossible not to include Mayke Nas‘ theatre work The Arsenal of Unlived Things in this same group of ‘non-music’ works. The piece was hugely enjoyable, acting as something like a live action version of the absurdist tableaux of the great Roy Andersson. Andersson’s wonderful films incorporate music in important and often disturbing ways, but they could never be described as being music theatre or ‘audiovisual’ works. They’re movies, and likewise The Arsenal of Unlived Things was neither music theatre nor audiovisual, but a splendid, often hilarious, work of theatre that incorporated music in a similar way to Andersson. Though enjoyable, its relevance to a music festival again felt incongruous.

Bates Mill Blending Shed on Friday night saw what purported to be a demonstration of Huddersfield Uni’s squillion-pound Fluid Corpus Manipulation project, though in practice almost all evidence of this system was, at best, difficult to discern. That was disappointing but some of the individual performances more than made up for it. Not Owen Green, who unlike his 2018 Electric Spring performance seemed to have exhausted the range of sounds that could be wrenched from his trusty cardboard box, and certainly not Rodrigo Constanzo, who exactly like his 2018 Electric Spring performance presented an entirely arbitrary collection of improvised sounds from his trusty side drum (plus some virtual bells and imaginary whistles from the Fluid Corpus thingy) that took very little time indeed to reveal itself, yet again, as infuriatingly aimless and clueless. Improvisation at its abject worst. 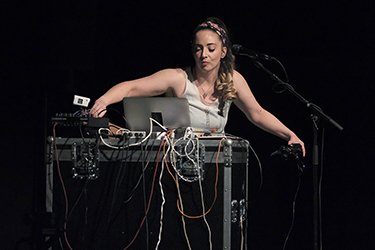 The other three performances couldn’t have been more different. Olivier Pasquet channelled a Raster Noton-esque sensibility in his Herbig-Haro (HH), a new work for electronics and lights. There was an engaging sense of development in its palette of glitched beats and bass – the lights apparently primarily aligned to upper frequencies – with occasional glimpses of speech, forming a lovely interplay of dance-like counterpoint. Eventually the lights became detached and the work’s epilogue rather nicely played out in complete darkness. Leafcutter John‘s new work Line Crossing used a live-generated computer score derived from, and interacting with, John’s live performance. As such, the piece acted as a clear-cut duet, the score indicating passages where the two played simultaneously or where one or other would continue alone. While John’s utilisation of assorted percussion instruments was somewhat unimaginative and lacklustre, the nature of the man-machine dialogue and the work’s overall structure – longer episodes at each end, with more convoluted, shorter sections around its centre – was hugely satisfying. Most impressive of all, though, was Lauren Sarah Hayes. Giving the world première of Moon via Spirit, she came across like a 24th century Chelsea Wolfe, transforming the concept of ‘song’ entirely, her vocalisations limited to occasional gasps, whispers, words and pitches that became seamlessly integrated into a phantasmagorical musical tapestry. An exhilarating experience, its sense of direction was articulated like a kind of sped-up genetic evolution; lasting a mere 11 minutes i’d have been happy to hear Hayes develop this for another hour or more.

As promised/threatened…Shorts Day…no, you didn’t miss anything spectacular; apart, that is, from the spectacular flop that was the Mabbett “piece” – “aimless and clueless” doesn’t even begin to cover it!

It was a privilege to hear up-and-coming vocal star Héloïse Werner for diddly-squat at lunchtime, although she didn’t exactly have the best material to work with – the best piece, involving all four ensemble members manipulating Marianne Schofield’s double bass simulaneously, didn’t involve her singing, and I do find Meredith Monk’s stuff something that I already have to be in the mood for not to find simply annoying (thankfully, I was in the mood on that occasion).

Beyond that mini-concert, the Moroz piece had some gorgeous sounds in it…and making my own small contribution to the Rosani installation in the covered market was fun! Thirdly, who in their right mind would diss Philip Thomas performing Feldman dance and film music? Too many of the rest of the day’s pieces fell into the I-can-take-or-leave-this, ultimately unmemorable category, though.

Much the same might be said of this year’s Mixtape, IMHO, Evan Parker et al.‘s mindblowing improv and Isadore Isou’s glorious exercises in splenetic gobbledygook aside. But that’s already on BBC Sounds, so you can judge for yourself!

Thanks Chris – it did feel strange not to be there! i know it’s a weirdly hit and miss experience, but i’m so glad that HCMF has persisted with Shorts day – i don’t know of another festival that features a whole day of free music, it’s definitely something to be proud of.

i’ll be checking out some of the things i missed online, though it would take a miracle for me to enjoy Evan Parker – don’t believe i’ve ever heard a single performance by him that hasn’t bored me to tears. But then, at HCMF miracles can and often do happen…