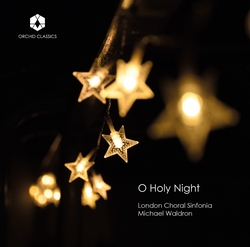 The solstice and the season of winter are fast approaching, so over the next week as we transition through i’m going to explore music that taps into some of the aspects of this remarkable time of year. By that i don’t just mean ‘Christmas music’ – which, let’s face it, is rarely something to get excited about these days – but also works that speak of cold, darkness and the ever more encroaching presence of the night.

To start, though, i am turning to music celebrating Christmas, in order to flag up a new disc called O Holy Night performed by London Choral Sinfonia. From the perspective of contemporary music, Christmas is seriously troublesome in the way it so often leads composers down over-trodden paths towards tradition, banality and cliché. It’s refreshing, then, to find a sprinkling of contemporary pieces on this disc that offer a little more than that. To be clear, O Holy Night doesn’t just feature contemporary music – the album is clearly designed to emulate a conventional Anglican carol service, including a number of exceedingly well-worn hymns and carols that act as structural points of familiarity and repose in between some of the more adventurous music. There’s not a great deal to say about these except that the choir, conducted by Michael Waldron, gives them all the most lusty treatment, at times singing with such overblown heartiness you can’t help wondering if copious quaffings of mulled wine took place before rather than after the performance.

While i’m obviously inclined to focus on the contemporary music, that’s far from being the only reason to enjoy this disc. Some of the older works on the album are rendered beautifully, particularly William Mathias’ Sir Christèmas – a piece that, despite being over-performed to the point of absurdity, never seems to lose its ability to sound like enormous fun – and Peter Warlock’s classic version of Adam Lay Ybounden, which here practically zings with festive spice and fragrance while its harmonies slither in a way that (like his even more famous Bethlehem Down) often suggests an underlying fragility.

As for the rest, there are some nicely effective new treatments of familiar words. Lullay my liking by former Swingle singer Carol Canning sets the fifteenth century words as a nice oscillation between soloistic plainness in the verses and tutti richness for the refrain. The back-and-forth effect highlights the intimacy of the words (Mary singing to the infant Jesus), particularly the altered final refrain that lovingly lingers over its closing words, “mine own dear Darling”. Scottish composer Thomas Wilson‘s setting of There is no rose dates back to 1974 and is something of a bridge between older convention and newer invention. Echoing something of the tone, mood and even harmonic language of the Warlock, the variations around each verse are generally highly restrained – which only makes its subsequent eruption when describing the angels all the more unexpectedly dramatic, the piece temporarily stepping out of its refined demeanour and letting rip. This outburst makes the more inward nature of the rest of the music, particularly the words that follow this section, seem all the more delicate and heartfelt. Composed a decade later, The Child of Light by Robert Saxton sets the composer’s own words, taking place in the aftermath of the Annunciation, describing the journey of the shepherds to the stable. It’s a lovely example of clear narrative simplicity, conveying a tangible sense of trudging onwards, progressing from darkness and difficulty to lightness and radiance. i wrote about Paul Edwards‘ No Small Wonder back in 2011, and it remains one of my favourite contemporary ‘lullaby’ carols. London Choral Sinfonia deliberately linger on the gentle contortions of its recurring climactic chord sequence, which leads to another lovely example of soft oscillating between simplicity and complexity.

Richard Pantcheff‘s A Christmas Carol turns two stanzas of Swinburne’s text into a kind of hypnotised reverie. A persistent organ motif serves as a regular pulse beneath the more free, at times, ecstatic articulation of the words, the latter of which giving the impression the singers are caught up in the quietest of raptures. While not in the usual sense of the word a radical piece, it’s certainly one of the more unusual and most beautiful Christmas choral works that i’ve heard in a long time, yielding more and more on subsequent listenings. Personally, i wouldn’t have believed i needed to hear yet another version of The Coventry Carol, but Jonathan Rathbone‘s take on it has completely won me over. Using the original melody as its basis, there’s something kind of exaggerated about this setting: progressing from no obvious changes, to gently tugging on the harmonies, to blowing open the music in a kind of tethered aggression for the rage-spattered third verse. Yet the exaggeration is most keenly felt in what follows, the final verse sounding as if its harmonic centre has been thrown off and is somewhat confused, abruptly clicking back into position for the final line. It works because it doesn’t work – a highly effective way of conveying something of the disoriented mourning spoken of in the words, reinforced by a closing return of the opening refrain, now sounding like an echo as if from beyond the grave, mysterious and transfigured with the addition of very high and low registers.

For me, the standout piece on the album is Peter Maxwell Davies‘ Alma Redemptoris Mater, the first of his Four Carols composed in 1961. No mention is made about this in the booklet but as far as i know this is the first recording of any of these carols, which is pretty extraordinary. The piece is a paradigm of simple undulating beauty, with echoes of mediaeval music – one phrase even mirrors part of The Coventry Carol – its various contrapuntal tendrils winding around and glancing off each other such that, from time to time, it’s as if a narrow shaft of sunlight was briefly shining on the music.

For anyone looking for an ‘all-rounder’ Christmas album that combines festive crowd-pleasers alongside more adventurous off-piste choral works, O Holy Night would be absolutely ideal. Released a few weeks ago by Orchid Classics, it’s available on CD and download.