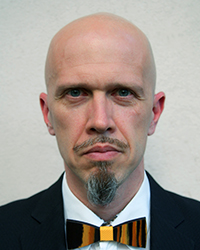 During my week-long journey into winter, i’ll be veering back and forth between sacred and secular music. When i first heard Tõnis Kaumann‘s setting of the Marian hymn Ave maris stella at the World Music Days earlier this year, i have to admit it didn’t make a huge impression on me. Then, i regarded it as over-simplistic, a bit like an exercise, but i’ve since spent quite a bit more time with the piece and have come to appreciate it a great deal more. Kaumann uses two melodies, the hymn’s original plainsong and, more often, another melismatic melody that may or may not be based on a different bit of plainsong (if it is, i’ve not yet been able to find it in my Liber Usualis), mirroring its scalic contour.

The structure of the work uses the stanzas of the text as the basis for a sequence of shifting permutations of a small number of parameters:

The piece therefore unfolds as a beautifully simple but ever-changing puzzle in which its different components keep shifting their alignment such that no two verses are exactly the same. To show this clearly, i’ve provided a simple analysis below that summarises the changing permutations for each verse. Of course, it’s perfectly possible to ignore this permutational aspect when listening to the piece, but to me it’s the way Kaumann takes a limited number of options and keeps them moving with respect to each other – always sounding familiar, never quite sounding the same – that makes the piece as interesting as it is. Furthermore, use of plainsong always requires a delicate touch, and the simplicity and restraint Kaumann uses, never moving beyond a modal harmonic framework, serve to celebrate the inherent beauty of the plainsong, of which his setting becomes a lovely form of modest embellishment.

This first performance of the work was given by Vox Clamantis conducted by Jaan-Eik Tulve, at the Dome Church in Tallinn as part of this year’s World Music Days in Estonia.

This overview shows the permutations for each verse, according to the following nomenclature:

So verse 1 indicates a tonic of G, using the plainsong melody sung by a soprano with a fifth accompaniment.

Hail, star of the sea,
Nurturing Mother of God,
And ever Virgin
Happy gate of Heaven

Receiving that “Ave”
From the mouth of Gabriel,
Establish us in peace,
Transforming the name of “Eva” (Eve)

Loosen the chains of the guilty,
Send forth light to the blind,
Our evil do thou dispel,
Entreat (for us) all good things.

Show thyself to be a Mother:
Through thee may he receive prayer
Who, being born for us,
Undertook to be thine own.

O unique Virgin,
Meek above all others,
Make us, set free from (our) sins,
Meek and chaste.

Bestow a pure life,
Prepare a safe way:
That seeing Jesus,
We may ever rejoice.

Praise be to God the Father,
To the Most High Christ (be) glory,
To the Holy Spirit
(Be) honour, to the Three equally.