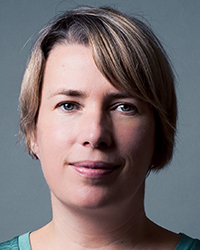 It’s nice, sometimes, when a composition isn’t concerned with layers of complexity and subtext, but instead focuses on a single idea. So as the days grow increasingly cold (here in the UK, at least), it seems an ideal time to explore one of Age Veeroos‘ latest works, the title of which, Külmking, translates as “chills”. It was written for one of my favourite ensembles, Una Corda, an Estonian trio comprising harp (Liis Viira), harpsichord (Ene Nael) and kannel (Kristi Mühling). Playing together, these instruments make for a heady, even an opulent combination, but in Külmking they create an altogether different musical environment.

In essence, it’s an onomatopoeic music, manifesting both the source and the effect of the chills. This is primarily articulated in two highly contrasting kinds of material: clear, repeating notes and vague chords that more often than not are packed into tight, reverberant clusters. Veeroos uses these materials to generate considerable tension and drama. The former often bring about a kind of pressurised poise, the repeating notes not so much progressing the narrative as doing the opposite, staying put, actively fearful of pushing ahead. The latter provide release but not relief, increasingly wild bursts of discharged noise, the chords – regardless which instrument they’re on – detonating like small cluster bombs.

Though the musical language in Külmking is relatively straightforward, it’s possible to read it in various ways. Taking the title literally, we can hear in its sharp points and glistening streaks of pitch a musical equivalent of shards of glinting ice, droplets of semi-melted snow, gusts of frigid wind, in an atmosphere that vividly conjures up the stiffness of deep cold. But chills come from more than just actual cold, and equally the obsessive behaviour of the players, with their spasmodic twitching, lunging and crashing – extended later on to tapping and banging on their instruments – could indicate the symptoms of a fever, or perhaps a more troubling psychological cause. Furthermore, it’s worth considering that the ‘Külmking’ is also the name for a supernatural malevolent creature in Estonian mythology, a spirit of the “unholy dead” that eats victims (especially children) who unwittingly disturb it. If that’s not enough to induce some shivers, i’m not sure what is. But however we interpret the nature of the chills in Külmking, their vividness is all too apparent, capturing an acute sense of disconcerting, somewhat unhinged iciness.

This world première performance of Külmking took place in February this year at the lavish Kadriorg Palace in Tallinn, given by Una Corda.