In just over a week’s time Iceland’s premier new music festival, the Dark Music Days, will be up and running again, and once again i’ll be heading off to Reykjavík to immerse myself in some of the goings-on. Details about the festival can be found here, and for any UK dwellers who fancy a spontaneous jaunt over to Iceland, there are some fantastically cheap deals to be had from Gatwick and Bristol (especially, with Bristol, if you travel on a Wednesday or Sunday), and some equally great deals to be found on AirBnB. As an upbeat to the festival, it’s a good time to touch on a number of releases that came out last year on the Sono Luminus label, showcasing some of the more exciting examples of Icelandic contemporary music-making. 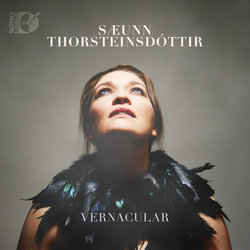 Vernacular is an album featuring cellist Sæunn Thorsteinsdóttir, exploring four works for the instrument. The most elusive of these is Páll Ragnar Pálsson‘s Afterquake, a piece that’s tentative and gestural – a steady sequence of swelling arpeggios and trills – as if it’s putting out vestiges or ruinous remains of ‘stuff’ for further consideration. Though in some respects hard to penetrate, and as such quite unsettling, there’s also something strangely beguiling about it. Þuríður Jónsdóttir‘s 48 Images Of The Moon is yet more elusive, fragile strands of material located within an implied habitat conjured up by an accompanying tape part, featuring soft nocturnal sounds. It’s so fragile, in fact, that it leaves you wanting to hold your breath for fear of impinging on it and damaging its delicately diaphanous soundworld.

And just when you think this mood can’t be sustained any longer, it persists throughout the enigmatically-titled ☉ by Halldór Smárason, a three-movement study of light and darkness inspired by reflecting on a candle. The piece consists almost entirely of what we might call ‘anti-material’, as if we were hearing an implication of the music rather than the music itself. On a first encounter with the work i’ll admit to feeling somewhat frustrated, but over time i’ve become more and more entranced by its chiaroscuro, occupying a place of profound darkness into which tantalising slivers of pitched, percussive and vocal sounds gently intrude, more forcefully at its conclusion. At the opposite end of the spectrum is Hafliði Hallgrímsson‘s Solitaire, a piece that began life over 40 years ago and has been revised several times in the intervening years. It functions as a contrasting five-movement suite, melding earnest lyrical impulses – some of them dark and brooding, forging a connection to the rest of the disc – with light effervescence, folk-like cheerfulness, and occasionally expansive ruminations, concluding with a dance-like jig so overtly lively it becomes borderline aggressive.

Quite apart from Sæunn’s committed and wonderfully engrossing performances, Vernacular is very close miced, to the point that it often has a spine-tingling, tactile quality due to the nature of the music (those with an ASMR fetish will likely find it highly stimulating). Best listened to very late at night and/or in complete darkness to get the full effect. [CD/Digital] 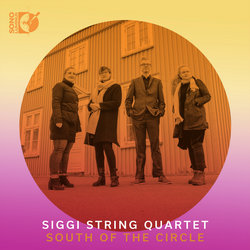 South of the Circle is an album by Iceland’s own Siggi String Quartet bringing together five relatively small-scale works. Valgeir Sigurðsson‘s Nebraska is by far the weak point of this release, its four movements dull, derivative exercises lacking originality or imagination. Fair Flowers by Mamikó Dís Ragnarsdóttir is more telling – at least, initially so. The way the work opens is fascinating, ostensibly simple but quietly conveying the sense that it’s actually a lot more convoluted, actively working through something. This impression of a process taking place gets by turns undermined and stabilised, though the 15-minute duration ultimately comes to feel problematic, losing the interest and focus that pervades the first half.

The rest of the disc is much more satisfying. Una Sveinbjarnardóttir‘s Opacity splits apart the quartet giving priority in each of its four movements to one of the players. What’s most interesting about the piece is its musical language, which has a throwback quality to it, continually half-quoting, half-alluding to existing musical tropes and idioms. These are defocused and obfuscated in various ways, the most effective being a dissolve into glistening harmonics in third movement ‘Elegia’ and by being rendered stunned and uncertain in the suitably-named final movement ‘Less’. There are more possible traces of extant music in Stillshot by Daníel Bjarnason, a work that draws quite heavily on the style and aesthetic of Thomas Adès’ Arcadiana. The allusive elements become fragmentary glimpses that you’re not quite sure you really heard amidst rapid glistening shapes and slow, shivering forms of stability. It’s often strikingly beautiful, made alluring due to Bjarnason’s reluctance to allow the music to settle, imbuing it with a nice restlessness. The most abstract piece on the album is Haukur Tómasson‘s Serimonia, which practically functions as an essay in stylised spasms. The quartet moves through an assortment of shifting rhythmic textures, some united, some individuated, though generally progressing as a group through these episodic changes. There’s a whimsicality to this that suggests it’s all pure fun, though the work’s final change into a strange landscape of blurred, sustained pitch is unexpected and arresting, making what went before now seem more troubling, even rather unhinged. [CD/Digital] 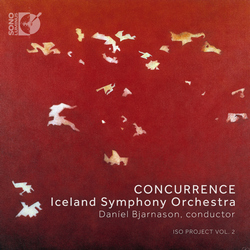 i was especially keen to spend time with the latest disc from the Iceland Symphony Orchestra, Concurrence, for two reasons: first because their previous album, 2017’s Recurrence, though mixed had nonetheless made a strong impact on me, and second because i’d heard the orchestra perform some of these pieces at last year’s Dark Music Days. From a listening perspective, the difference between live and recorded performances is obviously quite marked but i’m consistently surprised at the ways in which one’s perception of a composition can be either consolidated or radically changed when going from one to the other. Both situations happened on Concurrence.

My previous feelings about María Huld Markan Sigfúsdóttir‘s Oceans were confirmed by this recording. i remarked before about its dependence on filmic tropes, and that sense was greatly reinforced in this performance (conducted throughout by Daníel Bjarnason). i could have been listening to the soundtrack of pretty much any generic Hollywood movie of the last 10 years. That being said, i’m going to backtrack a little on my previous sentiment that Maria’s approach to these tropes is “tired” and “ineffectual and clichéd”; that seems a touch harsh, and while its musical language is overwhelmingly familiar it doesn’t change the fact that, at its best, there are moments of majesty and magic to be found in Oceans. i guess what i’m trying to say is that the piece is more about surface and scope – distance, if you will – than depth. It’s interesting to consider Páll Ragnar Pálsson‘s Quake alongside Afterquake, included on the previously discussed Vernacular disc. Once again featuring cellist Sæunn Thorsteinsdóttir, here – in a concerto environment – we perhaps experience directly what we only hear in semi-traumatised glimpses in the solo work. If Afterquake is characterised by its tentativity, the one consistent thing in Quake is its inconsistency. The piece – appropriately, considering its title – is all instability and volatility, any vagueness it has directed towards portentous rather than uncertain ends. In this respect, the way Páll Ragnar melds dense textures with soaring lyricism only ends up reinforcing how ominous it all feels: the cello becomes a kind of lone voice being subjected to, rather than an active participant in, the turbulent machinations of the orchestra. Indeed, the cello is regularly swallowed up by everything, making it no small achievement that it’s still going by the end. This lends the work a plaintive, even tragic, quality that improbably manages to militate against the weight of the orchestra; all the same, the fact that the cello ends up the way it does in Afterquake says something about how overwhelming are the effects of Quake. Perhaps, in hindsight, Afterquake shows one or two signs of PTSD?

The more time i spend with Haukur Tómasson‘s music, the more i wonder whether he’s the closest thing Iceland has to a minimalist. His musical arguments are often expressed in the form of convoluted rhythmic materials – a more abstract, purely musical, focus of attention that sets him somewhat apart from many of his compatriots and again proves the point that there really is more to Icelandic contemporary music than just an endless obsession with nature. In contrast to Quake, in Haukur’s Piano Concerto No. 2 (featuring pianist Víkingur Ólafsson) the soloist definitely dictates both the course and the character of the music, along the way sometimes causing it to veer dramatically, and other times going inward, allowing itself time to quietly noodle. It’s primarily a work exploring momentum rather than introspection, though, becoming increasingly playful as its reaches its culmination. It’s hard not to just get completely caught up in it. i’ve written about Anna Thorvaldsdottir‘s Metacosmos on several occasions last year – following its Icelandic première at the Dark Music Days, and its UK première at the Proms – and it’s a piece Anna and i discussed in depth in our Dialogue. So while in some respects there’s not much more i can add – i still think it’s an incredibly immersive and beautiful piece, one of the most interesting articulations of her long-standing interest in combining drones and filigree materials – on the other hand this recording has expanded my understanding of the way the piece unfolds. i’ve previously characterised it as a kind of binary diptych, the latter half constituting a reworked rendition of the first half. That much is still true – yet what the performance on this disc has clarified in a way i haven’t heard previously is the extent to which the second half is not so much a restarting as a continuation of an overall, ongoing trajectory. That might seem like a small, subtle distinction, but in practice it makes quite a difference in terms of how one engages with its long-form narrative. It’s worth saying that Metacosmos sounds at its best, i think, in live performance – there are times when this pristine recording of the work feels too refined, too ‘clean’ – but that doesn’t change the fact that, regardless how or when it’s heard, the music takes us on a powerful two-part downward spiral of sorts, one that ultimately collapses into an excruciatingly poignant burst of melancholy, which for me remains one of the most moving things i’ve ever heard to have come out of Iceland. [CD+BD/Digital]