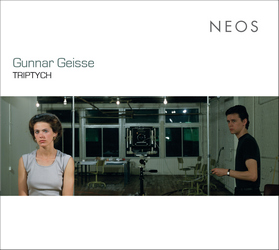 Coincidentally, another project i’ve been involved with also materialised last week. For Gunnar Geisse‘s new CD TRIPTYCH, released on the NEOS label, i’ve contributed an essay to the liner notes. Titled ‘Liminal (un)reality’, my text explores the music’s complex amalgam of reproduced and recreated, supposedly real and actually real sounds, with regard to both his use of samples as well as to the relationship between pre-planning and spontaneity, combining live improvisation and post-performance editing and processing. You can read my text in full on the TRIPTYCH page of the NEOS website (click on ‘read more »’ on the left-hand side) – i hope it serves as a useful and interesting introduction to what Geisse is doing in these pieces.

Apropos: TRIPTYCH actually consists of just two pieces, a Piano Concerto in two movements – the first two parts of the triptych – followed by the single movement work rhythm changes. Both works were performed using Geisse’s electric guitar and laptop setup, resulting in a deliriously weird soundworld exhibiting an uncanny blurring of ‘real’ and ‘unreal’. As with The Wannsee Recordings, Geisse’s previous disc that i reviewed late last year, there’s again something of the spirit of Frank Zappa’s faux-orchestral Synclavier compositions, but on TRIPTYCH this is secondary to a much more intensive, rigorous and large-scale development of its musical ideas. Nonetheless, these two works are just as bewilderingly capricious, and i’ve found every time i listen i end up with a massive smile on my face. If 2020 is quite reasonably getting you down, Gunnar Geisse’s TRIPTYCH may well be just the tonic you need – it’s by far the most wonderfully unhinged and exuberant thing i’ve heard all year.

Something of the essence of TRIPTYCH is captured in two quotations, both of which i wasn’t quite able to work into my text. The first is from jazz guitarist Peter Bernstein, whose voice is heard in the later stages of rhythm changes, and it says something of the convoluted form of continuity exhibited in Geisse’s music:

The tune starts like this, then it goes wherever it goes, but it’s about … what’s the sense of what’s coming next …

The other is by E. E. Cummings, from one of my favourites poems (no. XXIV) in his 1922 collection Tulips & Chimneys, that i happened to be re-reading at the same time i first listened to TRIPTYCH. In a phrase that stayed with me while contemplating this music, Cummings speaks of a friend who

himself occasionally contrives an unreal precise intrinsic fragment of actuality

Released last week by NEOS, TRIPTYCH is available on CD (no download options just yet).