One of the composers i’ve become most fascinated by in recent years is Mirjam Tally. Born in Estonia, but for many years based in Sweden, Tally’s work often draws on elements of folk music and is invariably imbued with allusions to the natural world. This attraction to nature extends throughout her output, from early works such as Don’t-Forget-Me-Flowers (1998), Air (1999), and Last Year’s Sun Still Glitters in the Drop of Water (2000) to more recent pieces including Luminescent seas (2017), Vårtidens ljus [The light of spring] (2018) and Hundred Words for Snow (2019). Furthermore, the way Tally brings together instrumental, electronic and experimental ideas is very individual, conjuring up complex, electroacoustic environments that are deeply effective and immersive.

That being said, i have to admit that it’s taken me a while to get the measure of what Tally is doing in her work. When i first heard Land of Tree Worshippers, composed in 2014 for a mixed choir with traditional instruments and tape, i was pretty unimpressed, a sentiment captured in my dismal write-up of the encounter. To be honest, i’m embarrassed to have responded in that way. In the four years since that time, the piece has repeatedly pulled me back and as i’ve spent more time with it – while simultaneously immersing myself in the rest of Tally’s sizeable oeuvre – i’ve not simply come to appreciate it better, but recognise it as a work of considerable elemental power.

In both its title and its text (by Kristiina Ehin in an English translation), the piece directly addresses nature and worship. Ehin is a poet whose specialty is folklore, and this permeates her words, which make both the stuff of nature and the human body in its midst highly tactile. These tangible references – ‘tree’, ‘ribs’, ‘sea’, ‘bones’, ‘sand’, ‘thistle’, ‘stone’, ‘seashells’, ‘ship’ – are combined with intangible ones, invoking the human soul in close conjunction with the Rowan tree, a tree that throughout Europe has had a long-standing association with paganism and folk magic. 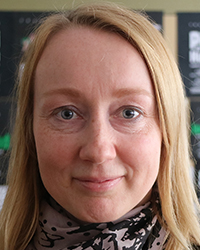 Just such an atmosphere permeates Land of Tree Worshippers. Tally’s music doesn’t merely set Ehin’s words, but transforms them into not so much a formalised liturgical act as a more raw and authentically human demonstration of worship. Yet it’s a species of worship foreign to conventional, institutionalised notions of that word. There are a couple of obvious links to traditional practices, in its sporadic use of drone, and also in the familiar sound of whirly tubes that appear at the start and end of the piece, calling to mind certain forms of indigenous ritual. For the rest, though, Tally’s musical language melds these ancient allusions with modern sensibilities. Her drone is repeatedly flecked with sharp metallic accents and overlaid with scratchy swatches of abrasion. The voices cluster together in both a literal and musical sense; their communal attitude is all awe and wonder, marvelling at the air of mystery that hangs over everything, responding with a trance-like mixture of contemplation, adoration and reverie, surrounded and punctuated by a plethora of whispered vocal tics.

Tally focuses all of this on a strain of melody that runs throughout, a form of avant-chant that, contrary to familiar brands of chant, has a tendency to rise into the atmosphere as if pulled by an inverted gravity. This is a perfect counterpoint to the intense earthiness of the words, matched by this weightlessness to create something that ends up hovering somewhere between the soil and the stars. Furthermore, there’s a beautiful range of clarities that emerge from this choral rapture, Tally sometimes focusing it into a single line, or giving it a vaguely triadic connotation, while towards the latter stages it evolves into the most convoluted but marvellously radiant agglomerations of pitch that, if anything, demonstrate an even more powerful sense of vocal unity than the simpler passages, in part simply because it seems incredible that these complex shapes can cohere so strongly.

One of the things i love most about Land of Tree Worshippers is its sense of spontaneity. Even the tape part feels as if it is interacting with and responding to the singers, its occasional accents acting like white-hot sparks of energy cutting through and embellishing the mellifluous vocal textures. But even more than this, and to return to the idea of worship, i love the fact that the piece is such a genuine, heartfelt and above all vital act of expression; it doesn’t have a purpose beyond simply needing to be articulated. Its ecstasy is impelled by urgency.

Originally commissioned by the Estonian Philharmonic Chamber Choir and premièred in late 2015, this performance was given by them in April 2017, conducted by Kaspars Putniņš.

I have written several works, in which I use Kristiina Ehin’s poetry. Ehin’s poems have also inspired some of the titles of my works. I often use English translations by Ilmar Lehtpere. One of the reasons is obviously his deep understanding of the English language but another important reason is the fact that the English language is rich in consonants and using a combination of different consonants or parts of words have always been an important element for me while working with a choir.
Kristiina Ehin often finds her inspiration in nature and so do I as a composer. That’s another reason why I’m often using texts by poets with similar sources of inspiration. Wide open landscapes, sounds of the sea, shorelines, loneliness in the nature…
My idea in that composition is to create a “surround sound” experience of all these sounds of nature, that’s why the choir members are required to be placed around the audience and are sometimes recommended to move around. Using native instruments such as bullroarers and also plastic whirly tubes should also increase the imaginary experience of being in an open landscape in the middle of nowhere.