For the next work in this year’s nature-themed Lent Series i’m turning to not so much a fully-fleshed, self-contained composition, but something of a miniature curiosity, an outtake saved from the cutting-room floor that’s subsequently been restored. Olivier Messiaen‘s final orchestral work, Éclairs sur l’Au-Delà…, completed in 1991, was a return to the scale (though not the style) of Turangalîla, composed over 40 years earlier. Its collection of 11 movements continued the various strains of thought that obsessively dominated Messiaen’s compositional thinking throughout his life, the extra-musical facets of which centred on theological concepts and birdsong.

While that number of movements, with a total duration of a little over an hour, may seem sufficient to do justice to his underlying conception – in this case, contemplating the afterlife (the title roughly translates as “lightning flashes over the hereafter”) – Messiaen evidently had more ideas for movements than he ended up incorporating into the final piece. Apropos: Un oiseau des arbres de Vie (a bird of the trees of life), a five-minute movement completed in short score, but ultimately omitted from Éclairs at a late stage in the composition process. A few years ago, Messiaen scholar Christopher Dingle took this completed movement and orchestrated it as Messiaen might have done (indications of orchestration were made in the original, 3-stave score), and it was given its first performance at the 2015 Proms.

It’s interesting to consider Un oiseau des arbres de Vie in relation to both Éclairs sur l’Au-Delà… and also Messiaen’s wider output. Within the context of Éclairs, there’s the question of where in the work it might have been placed, due to the fact that, stylistically, its music could be said to duplicate (not literally) ideas articulated elsewhere in the work, plus the fact that the ninth movement in the piece, ‘Plusieurs Oiseaux des arbres de Vie’ (many birds of the trees of life) explores a similar idea but with multiple birds rather than just one. If Messiaen’s order of movements isn’t changed, one place it might have worked is after the long, ecstatic fifth movement ‘Demeurer dans l’Amour…’, though that would to some extent ruin the exciting, suddenly imposing impact of the sixth movement ‘Les Sept Anges aux sept trompettes’. Maybe Messiaen simply felt there was enough birdsong already in Éclairs, and it would be hard not to agree with that. 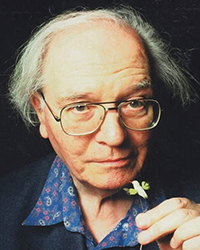 In terms of his wider output, to say Un oiseau des arbres de Vie bears similarities to other of Messiaen’s works is a pretty meaningless statement considering the extent to which his general style and aesthetic, and the forms of musical behaviour he favoured are so extensively explored through the last decades of his life. That being said, while a gesture here or there brings to mind a similar phrase in, say, Chronochromie or Oiseaux exotiques or Des canyons aux étoiles, it’s striking how the music it most closely resembles is the rest of Éclairs. Over the last few years when i’ve spent time with this movement it’s inevitably led to me revisiting Éclairs sur l’Au-Delà… immediately after, and the connection (though perhaps imaginary) always seems obvious.

Beyond this, it’s worth nothing that a movement focusing on just a single bird is by no means usual in Messiaen’s work. His tendency was to favour multitudes (‘Plusieurs Oiseaux des arbres de Vie’ features 15 of them), whereas instances of just a single birdsong being explored are limited to just two in his entire output: the piano-only fourth movement of Des canyons, ‘Le Cossyphe d’Heuglin’, featuring the White-browed robin-chat, and another part of Éclairs, ‘L’Oiseau-lyre et la Ville-fiancée’, exploring the Lyre bird. In the case of Un oiseau des arbres de Vie, as its subtitle, ‘Oiseau tui’ indicates, it’s the song of the Tui bird of New Zealand that is being exclusively featured.

In this rather technical sense, Un oiseau des arbres de Vie is noteworthy, though, as i indicated above, as an aural experience, the extent to which birdsongs retain their highly distinctive, unique character in Messiaen’s work is much more questionable. i don’t say that in any way to diminish their interest or their impact, or to suggest it’s any kind of failing on Messiaen’s part. i’ve always loved what birdsong ends up sounding like once it’s been filtered through the very particular form of extreme processing that is Messiaen’s musical language. Furthermore, the accuracy (or otherwise) of Messiaen’s transcriptions is hardly the measure by which his music utilising birdsong succeeds or fails. They’re above all a powerful, allusive force, directly tapping into the unpredictable sound and glory of the natural world, harnessing it as a model of and a starting point for musical material.

Ultimately, the certain form of stylistic genericism that pervades Messiaen’s use of birdsong seems to me an apt correlate for the way species of birds – their patterns and plumage, their songs and calls, their behaviours and attitudes – are all variants on a theme. Every one of them is fascinating, all the more so when focused upon in isolation. So i think it’s good that Christopher Dingle has rescued Un oiseau des arbres de Vie from obscurity, and enabled us to hear Messiaen’s focused impression of this marvellous little bird.

The world première of Un oiseau des arbres de Vie (Oiseau tui) was given by the BBC Philharmonic conducted by Nicholas Collon.

I heard a lot that was inimitably Messiaen in this piece, yes, but something about it also put me in mind of the kind of music Tippett was writing around the same time, e.g. The Rose Lake. Not two composers I’ve ever thought to put together in the same sentence before, but, come to think of it, given their shared propensity for grand (overreaching?) philosophical conceptions, maybe that isn’t such a daft notion after all…

Hmm, it’s a long time since i’ve listened to The Rose Lake, so i’d need to dig it out and investigate. Do you mean anything specific or just generally (stylistically, aesthetically)? It’s hard to imagine Tippett writing something that sounds just like this Messiaen piece, but then my memory of The Rose Lake is poor…

It’s hard to put my finger on what precisely put me in mind of Tippett. Something about similar harmonic/gestural behaviour, maybe, and/or the orchestration? I mean, looking more broadly, they were both visionary composers in their own way, but the emphasis there is definitely on “in their own way”…

It feels a bit odd to call Éclairs a return to Turangalila, when it may be seen as simply a continuation of the massive scale of the more immediately preceding Des canyons aux étoiles.

The Faber & Faber Messiaen Companion ed. Peter Hill has recently been republished. Malcolm Troup’s article therein on the orchestral music of the 1950s and 1960s, is rather opinionated. He sees those pieces as Messiaen’s best, while after this period the orchestral works are marked by gigantism and bloat. I remember liking Éclairs and I need to revisit it, but there is something special about the gracefulness and digestible scale of the mid-period orchestral works.

i alluded to Turangalila simply because, to me, there’s an overall homogeneity in that piece that seems similar to that in Éclairs – but which i don’t really experience in the same way with Des canyons. Perhaps it’s just a personal thing – and you could easily argue that Turangalila and Des canyons are closer-related than Éclairs as they’re both piano concertos – but i hear Éclairs as a latter-day symphonic work, which isn’t how i hear Des canyons.