i’ve been catching up with the latest pair of releases from the always interesting Neu Records label. In the process, i’ve been contemplating the fact that both of them pull the rug out from under you in terms of what’s certain and uncertain about the music, which often appears to present itself as manifesting – or being caught in a tension between – completely polarised ideas at the same time. In the case of Time Becoming, an album featuring two ensemble works by Bryn Harrison, the tension exists primarily in its push-pull relationship with stasis and change, and (related to this) connection and isolation. It’s a tension that’s reinforced by the slightly (perhaps deliberately) spurious titles Harrison gives these two pieces: repetitions in extended time and How Things Come Together. Both of those titles could hardly be more clear: bald, functional statements of intent that ostensibly encapsulate in a few words exactly what we’re about to hear. As it turns out, they’re also marvellously inaccurate – or, at least, they only hint at part of a bigger story. 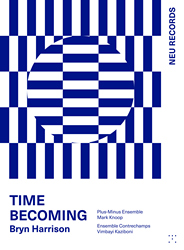 Let’s start with repetitions in extended time, performed in this recording by Plus-Minus Ensemble. it’s certainly true that a perception of repetition is constantly present. We hear phrases and gestures apparently cycling round, although from the outset there’s also a distinct notion of slow development taking place. i quickly found myself wondering whether any of the parts were actually linked or whether they were in fact only ‘connected’ inasmuch as they play out simultaneously in close proximity, each undergoing a gradual evolution as they do so, creating something we could perhaps call ‘proximal polyphony’. The fact that, at intervals, the ensemble pauses and restarts together indicates at the very least a communal mindset, but nonetheless the kind of unity demonstrated in the piece seems to be less about cohesion than coagulation. Both heard individually and as a whole, Harrison employs strict limits on the material and behavioural palette allowed to the players, which reinforces the impression of repetition and pseudo-stasis, the flux of the piece taking place within these imposed limits, pitches often caught in quasi-illusory Shepard tone-like risings and fallings. Regarding this flux, the sporadic pauses come to feel increasingly momentous, begging the question of what they signify and what connection (if any; real or imagined) we make either side of these hiatuses: is there continuity or are they isolated islands of activity?

It’s not a point worth labouring, but it’s undeniable that repetitions in extended time displays something of the ignorable / interesting dichotomy quintessential to ambient music, though – again highlighting the somewhat misleading quality of Harrison’s titles here – by the close of the work repetition seems to be almost the one thing the piece is not about. Yet the impression of stasis, of ideas circling around a slowly-roaming central point, is prevalent, and it’s possible to allow its details to defocus into a glutinous mélange of elements that’s paradoxically dull and riveting simultaneously. After it finished (and this has been the case on all subsequent listenings too) i’ve found i need to listen to nothing else for quite a long time; it’s a piece that so successfully immerses us in its unique, clearly-defined world that it seems to take a while to fully leave it.

To an extent, the brief silence on the album before the second piece, How Things Come Together, starts feels like another of those mysterious pauses, reinforced by the fact that there are distinct similarities in terms of behaviour. That being said, there’s a much stronger impression in this work, performed by Ensemble Contrechamps, that the players are part of a single, cohesive unit. Unexpectedly, it brought to mind sequences in Messiaen’s Turangalîla where multiple elements all proceed at once, semi-independently, yet being unmistakably related and connected to one another. Pauses don’t feature in this piece, but the way it shifts in and out of patterns causes one to wonder whether the music is unstable or, in fact, moving between discrete (and perhaps disjunct) centres of certainty, a similar effect to the stop-start aspect of repetitions in extended time. Perhaps it’s due to the intense level of immersion experienced in the former piece, but How Things Come Together seems much less compelling, less hypnotic, by comparison, but its slip-sliding relationship with paradoxes is no less striking. 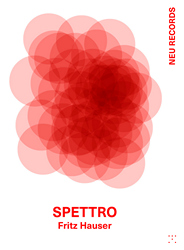 The music by Swiss composer and percussionist Fritz Hauser featured on Spettro, performed by Hauser himself, blurs the distinction between poles of austerity and playfulness. This is perhaps best captured in the three tracks devoted to improvisations, where an apparent fastidiousness in the clarity and positioning of each impact lends the performances a heightened, ritualistic atmosphere, which is gently undercut by the lightness and hints of frivolity in their execution. They vary in the strength of their pull; No. 2 is the most inert, though remains weirdly compelling, while No. 3 veers away from regular percussive strikes to explore a leftfield environment of scrapes and something akin to a melody on the lion’s roar, like a cross between an exotic stringed instrument and an equally exotic wild animal. No. 1 falls between the two in terms of activity, and is the most mesmeric, melding opposites – dry and resonant, individual impacts and frictional noise – to form a short, intense meditation.

But it’s the first and last tracks that provide the real meat on the album. Shong, for solo snare drum, is a piece i discussed last year, following Hauser’s performance of the piece at the 2020 Forum Wallis festival. i wrote then that seeing Hauser perform felt like a distraction from the all-important, ever-changing subtleties of timbre emerging from its non-stop machine-like repetitions and shifting clouds of rubbing and scraping sound, so the opportunity to focus purely on the sound here is a good one. Austerity and playfulness are strongly demonstrated in the work’s abrupt tilts towards and away from regularity, suggesting a somewhat mischievous (or at least conflicted) mind in charge of things.

At 45 minutes’ duration, Spettro is a major work in which the essence of what makes Shong tick is hugely expanded and explored at length. Although episodic, dividing the piece into nicely organised and well-defined sections, Spettro is a positive litany in uncertainty and ambiguity. Are its repetitions strict? Is the texture growing or reducing? Is that a secondary layer behind or simply a by-product of instrumental and ambient resonance? Is this section a continuation of the last one or something unrelated? Like an impromptu drum solo blown up to gargantuan proportions, Spettro taps into – as its name in part suggests – a full spectrum of percussive possibilities, not merely blurring but embracing and merging the austerity of ritual and arbitrariness of play into a complex, disorienting whole. In the wake of this piece, the noise of literally any two objects striking each other will instantly sound like an extension of Spettro, transforming mere, anonymous impacts into sonic moments with considerable significance and potential.

Spettro and Time Becoming are both available direct from Neu Records, in a variety of physical and digital formats, including surround sound options.