As was the case at last year’s festival, most of the concerts at Forum Wallis 2020 focused on works for ensemble. However, while in 2019 the majority of performances involved larger numbers of players, due to the pandemic almost all of the pieces this year were for small chamber groupings, usually two to four players. There was one of these concerts each day, featuring Shizuyo Oka (clarinet), Melise Mellinger (violin) and Åsa Åkerberg (cello) from Ensemble Recherche on Monday, Fritz Hauser and We Spoke’s Julien Annoni (percussion) on Tuesday, and Thomas Frey (flute), Bernhard Zachhuber (clarinet), Annette Bik (violin) and Benedikt Leitner (cello) from Klangforum Wien on Wednesday.

It was interesting to hear how many of these chamber works positioned their respective materials at one end or the other of an imaginary continuum of (in)tangibility. Among the most immediately tangible was Claude Vivier‘s Pièce pour violon et clarinette, Mellinger and Oka appearing to follow, imitate and chase each other, always kept apart at an intervallic distance of between a third and a fifth. Their performance was superb – particularly the most rapid sequences that were truly dazzling – conveying fun and playfulness while at the same time making us acutely aware of the gap between them, that ultimately came to feel like an impossible-to-bridge gulf. Somewhat similar in character was doublet + 1 by Tomoko Fukui, a piece so relentless and flighty that on many occasions the music seemed to be running away from the players. It was more about the raw impetuosity of the chase than an attempt to sculpt or make elegant the results of it, a volatile froth that wasn’t afraid to embrace child-like artlessness as an integral part of its frantic game. 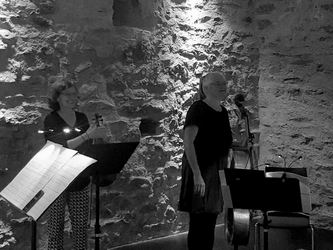 There were echoes of the Vivier in Scelsi‘s Kho-Lho, in which Frey and Zachhuber beautifully gave the impression of being twin aspects of a mirror-image – though which was the original and which was the reflection was hard to say. While intimately closely-aligned, they moved in and out of sameness, sometimes with such subtlety that the only trace of it was in the soft shimmering clashes of their almost-unison pitches. Despite its title, there was nothing diminutive about Toshio Hosokawa‘s small chant for solo cello. On the contrary, every note played by Benedikt Leitner appeared to contain the utmost importance in an act of intense personal solemnity. Johannes Schöllhorn‘s a self-same song could hardly have been less solemn; in many respects the piece felt only surface deep, yet its frenetic material – a messy mix of gestures and rapidity, peppered with flair-up intrusions – meant that this hardly mattered.

Many of these different elements were brought together in Fausto Romitelli‘s Domeniche alla periferia dell’impero, where filigree was used to extensively decorate a sequence of shifting tonal centres. The relationship between these two facets was fascinating, the decoration behaving in an utmost free way while always remaining tenuously connected to its foundation, indicating a gentle act of rebellion, pulling at the leash. This was extended further in the work’s second part, where Klangforum Wien ramped up the sarcasm of the music while also conveying a plaintive tone running through it. The lasting impression it gave was of a plight.

At the opposite end of the continuum was music less concerned with grabbing our attention or forcing its intentions and attitudes upon us. Gérard Pesson‘s Bruissant divisé [“rustling divided”] projected vague, abstruse ideas into the castle space that just occasionally solidified into a pitch or dyad. More intriguing than directly engaging, it was nonetheless quite lovely. Melise Mellinger’s rendition of Rebecca Saunders‘ solo violin work Hauch continued a recurring feature of the composer’s work, in that it was as if the music itself (rather than via the composer) was working itself out in real-time. As such, the piece was seemingly rapt in its own inner concentration and the process of exploration being undertaken. It therefore conveyed something of an outward passivity, with the concomitant sense that we were witnessing a private contemplative exercise – another recurring Saunders trait. In hindsight, Hauch wasn’t so much performed as riddled. 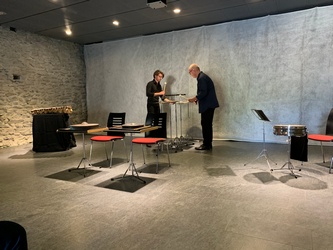 Tuesday’s concert devoted to Fritz Hauser‘s music epitomised this undemonstrative tone of gentle nonchalance. In both Shong and Schraffur, the act of listening was transformed into a ‘reading between the lines’, not about the obvious and ostensibly dull physical actions of the performers but the mysterious, unexpected sounds that these actions generated. In the former piece, Hauser’s dry, regular impacts on a solo snare drum belied the complexity of internal pitches, overtones and timbres that miraculously materialised from the instrument, whereas in Schraffur (which i wrote about a few years ago) the ceaseless scratchings of Hauser and Annoni on their gongs elicited a similarly subtle array of pitched and textural variations. The regularity of the scratching, over time, became strangely comforting, to the extent that i almost never wanted them to stop. When Schraffur finally ended, the silence that followed felt more than usually silent. Watching the performance in these pieces felt akin to a distraction, almost as if they were a sleight of hand to obfuscate the source of the apparent magic taking place. But in Zeichnung, the visual element became paramount, Annoni and Hauser facing each other on either sides of four cymbals upon which they executed an intricate, intimate choreography of rhythmic precision and percussive delicacy. Over time we became so accustomed to the pitch content of each cymbal that their splashy quality vanished almost entirely. It was mesmerising, like watching an in-depth, private conversation taking place, with each word and syllable, each assertion and interjection, expressed via soft impacts and abrupt mutings of the cymbals. 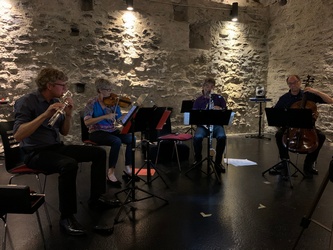 Softer still were the two chamber works that stood out most in these chamber concerts, both of which were receiving their world premières. Fries [freize] by Tobias Krebs was like a prolonged blur, a trio of clarinet, violin and cello creating a gentle but super-rich texture full of movement, its details constantly changing. It was deeply engrossing, like watching light refracting through and bouncing off a rotating, multi-faceted, glassy object, ranging from harmonic coherence to wild tonal ambiguity. Yet more hypnotic was Ulrike Mayer-Spohn‘s fKFW which, though it used a larger ensemble than all the rest of these pieces – voice, recorder, flute, clarinet, violin and cello – may well have been the quietest piece performed during the whole festival. To describe one part of it is to describe all of it: a network of incredibly gentle undulations, rising and falling as an ensemble yet each player clearly unique and individual, as if following the contours of in- and exhalations, articulating a form of blissed out ecstasy, oblivious to everything except the self, the message and the feeling. The message was a passage from Ovid’s Metamorphoses, speaking of the House of Rumour, being “a place at the centre of the world, between the zones of earth, sea, and sky […] There is no peace within: no silence anywhere. Yet there is no clamour, only the subdued murmur of voices…”. In keeping with that description, Mayer-Spohn rendered Ovid’s words as barely perceptible. At times, they seemed like a subliminal message at the cusp of consciousness; elsewhere they came across as a kind of sum total of a myriad superimposed ideas, resulting in the occasional glimpse of a word or phrase caught up and/or mingled with the never-ending instrumental texture. Utterly gorgeous.