Considering that most of us have been spending the last 12 months in varying forms of isolation, it seems a fitting time to focus on music for solo instruments. German label Kairos clearly feels the same way, as they’ve recently brought out a short series of five albums, each titled Solo, devoted to works by individual composers featuring (usually) just one instrument. Coincidentally, Métier have been exploring similar territory lately, on a couple of portrait discs of piano music. So last week i decided to surround myself with solitude, embrace all things soloistic, and binge listen to the lot. Music for solo instruments invites a peculiar, unique form of listening. Irrespective of style or aesthetic, it suggests a particular kind of intimacy, a one-to-one encounter, and as a consequence i find this inevitably tends to heighten the triumphs and misfortunes that the music exhibits. To put it another – admittedly irrational – way, the encounter, good or bad, feels more personal than it does when grappling with works for ensemble or orchestra, all the more so when listening alone. 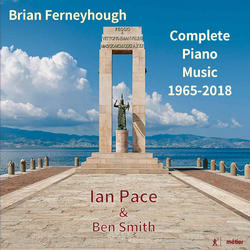 Therefore, after spending 90 minutes with Brian Ferneyhough‘s Complete Piano Music 1965–2018, performed by Ian Pace and Ben Smith, i found myself wondering what i’d done to be treated in such a casually disinterested way. It’s true that i consider myself a long-term fan of Ferneyhough’s output, though i’ve never given a great deal of time to the piano music (and rarely encountered it in the concert hall), and following this i’m honestly not sure whether, as a body of work, it’s simply something that needs a great deal of time, and repeated listening, and in-depth study, in order even to begin to get some kind of purchase on its hectic, ostensibly random, surface, let alone get beneath it. It’s also true that i’m a long-term fan of Ian Pace; i first heard him play not long after leaving school and i’m as blown away today by his performances as i was back then, just as i was frequently when listening to this double album. Technically, i suspect, it’s unassailable.

But pretty much nowhere did i find i was able to make much beyond small-scale sense of these pieces. i did at times find myself dancing virtually atop their surfaces, relishing some of their gnarly gestural twirls and oddities, finding some relief in the unexpected openings-out into short-lived vales of repose. Yet most of the time i realised i was listening in a state of abject bafflement, like hearing someone explain a series of detailed anecdotes in a language that i not only wasn’t familiar with, but which seemed to bear little resemblance to any of the languages i’ve encountered over the years. It’s rare that i feel so completely floored and bewildered by music, and while this experience can on occasions be mitigated by a more superficial approach – sometimes helping to break through a hitherto impenetrable surface – that failed too, primarily because there’s so little reward to be found on the surface of Ferneyhough’s piano music (not that that’s any bad thing). The only piece that demonstrably pulled (invited) me in was arguably the least ambitious of them all: the tiny El Rey de Calabria, Ferneyhough’s 2½-minute memorial to his cat Trifolio, a delicate, tender, charming work in which the nature and flow of the material, for once, made complete and perfect sense. 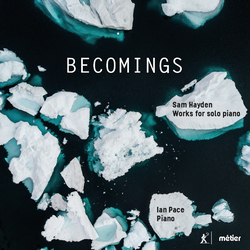 A similar experience of surprised bewilderment occurred when working through Ian Pace’s exploration of piano music by Sam Hayden, titled Becomings. Again, i’ve enjoyed Hayden’s larger-scale work for many years and, personally speaking, have often found something of a kindred quality to various of its compositional aspects, both aesthetic and procedural. However, here too the encounter quickly turned from possible familiarity to impossible obscurity. During the first few movements of the lengthy (46-minute) title work, the impression in the material ostensibly seemed to be relatively clear – or, at least, to be posing tangible questions. Amidst its instant filigree, there was an interesting relationship between stronger, dominant material and brief moments of gentler stuff, the outcome (or a side effect) of which appeared to involve a proliferation of trills. i really like music that poses questions, and moving from the first to the second, and the second to the third movements, the number of questions grew and grew.

Yet it soon became clear that not only were none of these questions being answered, but that the work had entered into a kind of behavioural stasis, never really moving meaningfully away from, or significantly developing, its fundamental starting point. Perhaps each movement was intended to be a separate ‘becoming’, but they became impossible to distinguish between, and eventually the material simply blurred into what sounded like an entirely arbitrary succession of events, connected only by being contained within a reasonably limited behavioural palette. Defeated again, although here too there was a similar respite to be had in Hayden’s 5-minute Fragment (After Losses), where the album’s omnipresent inscrutability did at least feel channelled towards a measure of palpable, potent anger.

The extent to which the solo behaviour on these two albums felt oppressively quixotic and unfathomable was subsequently reinforced by the complete contrast that came in the Kairos Solo discs. All performed by members of Klangforum Wien, i’ve so far explored three of them, devoted to Salvatore Sciarrino, Rebecca Saunders and Olga Neuwirth respectively (the other two focus on Toshio Hosokawa and George Aperghis; i hope to get to them in due course). 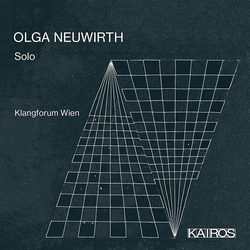 The Neuwirth disc is arguably the most dramatic of them, in part due to the intense contrasts that either define or are at least demonstrated in the six works on her album, in addition to the humour that tends to surface in her music. The most vivid instance of contrast comes in CoronAtion I: io son ferito ahimè, in which Neuwirth sets up a fascinating environment where virtuosic percussion, often (considering the title) having a heraldic quality, is foregrounded against an hovering, solemn ambient reredos. While there’s no sonic dissonance from this juxtaposition, the relationship between fore- and background is kept unclear, which only makes each element sound more forthright as the work progresses; the percussion, in particular, seems to project an air of desperation in its ebullience.

The contrast comes from within in bassoon solo Torsion, where overdriven, florid streams of material are periodically interrupted by episodes of distant, unexplainable suspension. It’s not clear what’s happening in these moments, but, again, it makes the nature of the bassoon’s activity all the more intriguing. incidendo/fluido for piano and CD is preoccupied with contrasts of rapid-fire, flamboyant honky-tonk and (similar to CoronAtion I) a strange, floating drone, which later expands into theremin-like glissandi. Most engaging of all, though, is Magic flu-idity, a dialogue between a flute and an Olivetti typewriter that embodies both the metre and the sarcastic wit of a Mahlerian scherzo. Neither part dominates – the emphatic pulse-like nature of the typewriter is frequently cancelled out – and the ultimate direction of its amusing narrative has a wonderful spontaneity that seems almost to catch the performer by surprise. 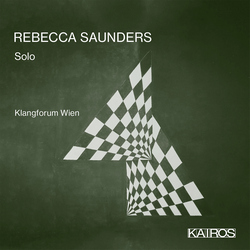 Perhaps the most extreme form of soloistic music found on any of these five discs is to be heard on the one devoted to Rebecca Saunders, which mostly features works that have not previously been recorded. More than most, her solo music invariably seems to occupy microcosmic environments writ large, their protagonists existing in deep shadow, often in such a way as to suggest not merely intimate but private activity. That’s obviously the case in the most overtly isolated piece on the album, Solitude, given an especially inward performance here by cellist Andreas Lindenbaum (lasting a full two minutes longer than Séverine Ballon’s 2015 recording). That being said, the idea that the instrument is not, as first impressions suggest, tentative but actually demonstrating a (self-)restrained strength is palpable, fuelled by the fraught nature of its subsequent development. In a similar way, by altering our sense of scale and space, Hauch for solo violin redefines the idea of ‘power’ in what might otherwise me deemed a ‘weak’ context. When i last heard this piece i was struck by its apparent real-time invention; here, in Sophie Schafleitner’s performance the emphasis is on the way its central line keeps vibrating itself out of focus, reinforcing the notion of examining something microscopic and struggling to keep it clear.

The most powerful work on the album is Saunders’ 2018 percussion piece Dust. A piece that floored me at HCMF 2018, its performance here by Björn Walker is no less astonishing, quickly transcending the physicality of the instruments to suggest sounds unexplainably mysterious and magical. In contrast to that 2018 performance, Walker avoids making Dust sound like an elaborate ritual, turning it instead into something abstract and, as a result, all the more mesmeric. That’s no doubt partly a consequence of not being able to see Walker performing, but the result is a marvellously aloof articulation of beauty that pulls you irrevocably inward while leaving you wondering about its actual nature for hours afterwards. 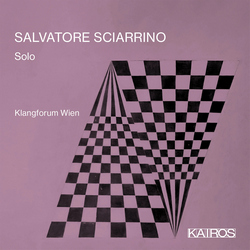 i said at the start about it being a fitting time to explore solo music due to the limitations and isolating effects of lockdown, and nowhere has this felt more instinctually personal than on the disc focusing on solo works by Salvatore Sciarrino. Above all, this is due to the way that, more than anywhere else, the music undergoes clear processes of investigation and enquiry. This is heightened by, as with the Saunders disc, the distinct impression of music as a private activity working things through in a confined space, done without the intention or knowledge of being heard. As such, it’s one of the quietest albums i’ve heard in a very long time, on occasion bringing to mind the rarefied extremes of Alexander Knaifel or Jakob Ullmann.

Though written over a wide time span – the earliest composed in 1979; the most recent in 2020 – the nine works featured complement each other beautifully. The Due notturni, which begin the album, establish the paradigm to follow, pianist Joonas Ahonen obsessively working away within tight behavioural limits to try to straighten out the musical ideas or make them resolve. Their polar opposite are the Duo notturni crudeli (cruel nocturnes), articulated with loud aggression; instinctively they seem off-putting and tough to take, yet the essential compulsive behaviour is the same, just expressed at the other end of the spectrum. It’s impossible to have favourites in such an engrossing collection of distinct but related, self-contained personalities as this, but Canzona di ringraziamento for alto saxophone perhaps deserves special mention. Not because Sciarrino is pursuing something fundamentally different here, but because of its especially captivating beauty – Gerald Preinfalk rendering its tiny trilled flutterings such that they resemble the soft sounds of a bird’s wings – the way it emerges via the smallest, barely-more-defined moments, and above all its faint but distinct hint of finally attaining its possible objective, and just beginning to explore its outcome, right at the very end of the piece. It could be a frustrating moment, but instead it feels tantalising, in keeping with the abstruse forms of intimate process being feverishly contemplated and worked through on this album.

One final reflection: it’s interesting to note that none of the Kairos discs include any detailed explanations about or programme notes for their content whatsoever (the booklets are mainly just biographical information), while the Métier discs could hardly contain more lengthy explanatory material. Considering the heavily polarised sense of accessibility and intelligibility of the music on these five albums, that seems especially ironic.