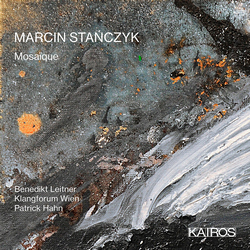 Some composers you encounter all the time; others not so much. i’ve only come into contact with Marcin Stańczyk‘s music on one occasion: back in 2017, at the UK première of some drops… for double-bell trumpet and ensemble. Until, that is, just recently, when i began immersing myself in a new CD of his music titled Mosaïque, featuring five works composed over the last 15 years.

One of the things that had impressed me most in 2017 was the potent sense of an inscrutable yet tangible process gradually unfolding, and that’s something that manifests here as well. In Geysir-Grisey, a chamber piece for violin, viola, double bass and two pianos (but somehow often sounding like many more instruments), it revolves around a recurring motif – rapid descending octaves of the pitch E – that, over time, starts to feel less and less like a bold opening gambit and more and more like a thorn in the music’s side, something that cannot be escaped. The piece increasingly starts to give the impression of a sequence of aftermaths, the motif being followed by brooding drones with tantalising traces of overtones; angry, close-unison frenzies; queasy slitherings around the ‘tonic’; blank, sparse ruminations; and climactic eruptions – all of which, in hindsight, don’t necessarily “achieve” anything other than being an authentic response to the motif. Regardless whether that motif is seen as problematic, there’s an unavoidable sense of a problem attempting to be solved in real-time, an attempt beset with frustrations, and possibly short-lived notions of progress, an attempt that leads to impossibly deep growling and a potentially unhinged soft banging on the piano strings at the work’s close – whereupon the motif appears yet again at the last moment, in an apparent moment of triumph. It’s one of the most mesmerising displays of musical obsession that i’ve ever heard, a deeply engrossing exploration of a world that seems to be defined – and confined – by a single pitch.

Some of the other works on the disc demonstrate similarly self-contained (hermetically-sealed?) worlds. Mosaïque, for cello and electronics, lives up to its title in its assemblage of miniatures noises that effectively constitute the individual motes of colour in its pointillist surface. Whether or not these tiny sonic morsels – a mixture of palpable impacts and vocalisations and more ambiguous swishes and wind – can be said to form some kind of accumulated “image” is hard to say, though this uncertainty is another example of the fascinating elusiveness in Stańczyk’s music.

This aspect becomes fully ecosystemic in the no less remote – if anything, much more alien – ensemble piece Blind Walk. Stańczyk populates this ecosystem with fleeting sounds – breaths, whistles, calls, blurts and bursts of song – suggestive of undefined creatures. The title seems to indicate the possibility that the “walk” we’re taking through this strange habitat is heightened due to being “blind”. That would certainly account for both the phantasmagorical nature of its soundworld and also the unexpected extremes it occasionally unleashes. Certainly, a sequence around six to eight minutes into the piece, centred on a simply enormous, full-blooded eruption, is one of the most unsettling, almost blood-curdling things i’ve heard in a long time, the music’s opening mystery abruptly turned threatening. But Stańczyk re-directs these hypothetical life-forms’ attention away from us into more individuated modes of articulation, as if each instrument were an independent creature undertaking its daily routines oblivious to anything else in the sonic “jungle”. As a consequence, when a second climax gets whipped up later on it feels less dangerous than simply anthropological, as if we had become an invisible observer of these diverse, exotic behaviours. Describing the piece in this way perhaps suggests that its primary attributes are evocative and novelty-driven, but what i find most beguiling about Blind Walk is its beauty: the natural world we’re blindly walking through may be intimidating and bizarre, but it’s also stunningly glorious to behold.

Considering the fact that the kinds of elusiveness heard in these works could be regarded as frustrating, it’s interesting to hear how the opposite doesn’t feel correspondingly more engaging. Afterhearings, a chamber work for flute, clarinet, cello, guitar and piano, comes across as very much more organised and relaxed. Moving through a clear arch structure, emerging from and receding into a loose, nebulous texture of twangs, breaths and other soft ephemera, the players gingerly, and imperceptibly, move toward an epicentre of highly metric, rhythmic energy. But despite its clarity, there’s something rather nondescript about it; perhaps in this context it seems too controlled, too measured and / or too well-defined; either way, it’s the only piece on the album where the level of immersion is anything other than optimal.

By contrast, the apogee of elusivity and engagement comes in Stańczyk’s 2012 orchestral work Sighs. The multiplicity of behaviours heard in Blind Walk here become downright kaleidoscopic, though here unified in a communal act of enormous, wild playfulness. It’s tempting to wonder if the piece has peaked far too soon in the wake of a huge swell barely two minutes in, but Stańczyk manages to maintain a high level of energy despite taking everything down to vague notions of movement happening somewhere in the middle distance. Put another way, in Sighs when not obviously letting up the orchestra sounds almost permanently poised, sometimes ominously so, even in its most gentle passages never relaxing for a moment. This is reinforced by loud vocal intrusions from the brass that could prove catalytic, but in practice their power is channelled into the ongoing overall state of unpredictable tension. i won’t pretend certainty about Sighs; the more time i’ve spent with it (and it’s a piece that invites multiple listens due to the wondrous allure of its disarming enormity) the more i feel entangled in its inner complexities. But it’s a literally amazing place to be entangled, in the midst of a world veering between extreme delicacy and overwhelming waves of united strength, simultaneously laden with detail while remaining distant in terms of its nature and structural / dramatic imperatives. By the end – of both this piece in particular and the album as a whole – its fundamental uncertainties have almost come to feel normal. Maybe it’s all just a matter of becoming acclimatised?

Released by Kairos, Mosaïque is available on CD and download.

A lovely record.
It was interesting to come across another release of Stańczyk’s work, also from this year:
http://www.anaklasis.pl/en/plyta/katalog/30/acousmatic-music.html
Interesting label, too.

Hi Chris, glad you enjoyed it too! i only recently discovered Anaklasis, but you’re right, they do look interesting…