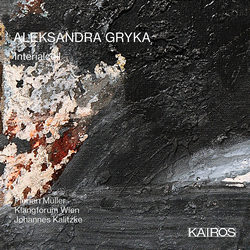 How have i never heard the music of Aleksandra Gryka before? That’s the question i’ve kept wondering while exploring Interialcell, a new CD featuring five works of hers performed by Klangforum Wien. It’s left me disappointed at making what is, for me, such a very late discovery (her worklist goes back over 20 years), yet exhilarated at the same time, as Interialcell is among the most thrilling things i’ve heard this year.

All but one of the works on this disc feature forms of ensemble, and their primary mode of operation involves uniting and directing its forces into various kinds of mass action. It’s tempting in some cases to hear these mass actions as “attempts” to achieve something or go somewhere specific, but i can’t help wondering whether that’s to miss the point entirely. Above all, these works of Gryka’s appear to be more about the journey being undertaken than by any putative notion of “destination” or “outcome”.

Take Emtyloop for string quartet, the most recent piece on the album (completed last year), in which the players continually group together to articulate looping and repeating ideas. Some of these seem to carry considerable weight: the opening is a frantic and ferocious rhythmic scurrying; a few minutes later a circling series of undulations is so overloaded with bow pressure it sounds positively crushed. Yet every one of these looping accumulations is met with breakdown: dissolving into sul ponticello unclarity; breaking apart into chaotic plucked and clunked notes; vaporising into little more than breath; collapsing into shivers, skittering and ricochets. Maybe from one perspective they’re all failed efforts to attain something, though across the work’s duration a palpable overall sense of balance is conveyed, being a series of looping figurations that rise from and fall back into nothingness.

It’s a balance that’s worked a lot harder in the title track, composed in 2003 (and the oldest piece featured here). Gryka establishes an uncultivated environment characterised at a fundamental level by a sense of elasticity. We’re pretty much thrown into this environment in medias res, quickly surrounded by animalistic shrieks and rapid materials that leave us disoriented. But barely a minute later almost nothing remains apart from air sounds, out of which emerges something lyrical. Whereupon the instruments band together (driven on by percussion) to push towards another possible mass agglomeration. Gryka keeps a lid on it all, though, establishing a wonderful push-pull narrative where nothing truly lets rip, nothing truly dies away, where everything feels somehow relaxed and poised simultaneously. If there’s a criticism to be made, it’s simply that the piece is too short: its seven minutes are over far too soon, just as its inscrutable tilting between these contrasts has become overwhelmingly intriguing.

Something similar manifests in Mutedisorder from 2015, though here, uniquely, the ensemble sounds divided, some aiming at maintaining a gaseous atmosphere made of faint breathy accents and weak sustained tones, while other more demonstrative voices take steps to create various kinds of rudimentary pulse. As in Emtyloop, these group efforts have weight and heft – usually stemming from the combined hammerings of piano and bass drum – but again, they’re easily cancelled out to leave confused aftermaths littered with disjecta membra, the last of which comes to resemble a bizarre, off-balance form of Morse code.

While the range of behaviour in these three pieces is extensive, they all seem held in check by their respective internal forces. The same can’t be said of the other two works on the album, both of which demonstrate what Gryka’s music is really capable of when the reins come off. Youmec (2006) for harpsichord and tape involves the instrument working to elaborate pounding motivic ideas while encased in a habitat that veers between the aquatic and some kind of avant-jungle. To what extent the harpsichord (superbly performed here in a vividly close-miked recording by Florian Müller) is responding to this atmosphere or simply working through its ideas irrespective of it is debatable, its attitude moving from genuine ferocity to passages where it appears to be idly picking over certain strands of thought. Either way, the denouement is hugely arresting, the instrument returning after a period of absence (seemingly populated by strange animal noises) in an explosion of cascades while the tape part pulsates underneath. Yet this exhilarating climax is undermined by a breaking down at its end, closing with enigmatic streaks of electronics.

Nowhere does Gryka push the possibilities of these complex, oscillating narratives more than in einerjedeneither. Composed in 2011, as well as being the longest piece on the disc (12½ minutes) it’s by far the most dynamically and behaviourally extreme. In some respects there’s a continuation of the push and pull heard elsewhere: an enthralling introduction made up of sustained and / or tremulous tones over deep poundings is rendered a false start, followed by a trace of vocalisation and an enormous cymbal crescendo. There’s something almost clumsy about it all, as if the players had started in full confidence without having the slightest clue about what they were actually going to do. Whereupon the music is effectively cancelled out (save for a lingering tinnitus-like tone that persists throughout much of what follows – perhaps a vestige of that over-eager crescendo earlier), and the ensemble once again works to group together into a number of pulsing sequences and surges, arranging themselves into semi-orderly unisons where the players take it in turns to present their notes. Evidently meaningful yet ostensibly directionless, it’s fascinating to hear the ensemble continually reform into ever more exotic forms of primary (primordial?) shapes and ideas.

What separates einerjedeneither from the other works on the album is its underlying emotional heft, coupled with a distinct sense that the standard limitations of instruments are no longer adequate. Triggered by crazed vocal screams, everything erupts, let loose in an immense frenzy that, even though its heat cools, persists for several minutes, its details remaining stubbornly indistinct. It’s a jaw-dropping, mesmerising action that only slowly finds its way back to something approximating order, the players almost accidentally stumbling back into synchronicity before collapsing into fragments while the tinnitus continues ad infinitum.

This is some of the most fearless, enthralling music-making you’re ever likely to hear, five works that overthrow notions of direction and development in favour of circularity and group unity. Forget about destinations, this is music that invites you to come along for an intensely and uniquely wild ride.

Released by Kairos, Interialcell is available on CD and download.