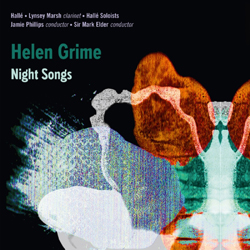 The majority of new releases to have come my way recently have featured music for ensemble and/or orchestral forces, each disc of which is usually devoted to the work of a single composer. The opportunity to scrutinise an individual’s work in great depth at times turns out to be something of a mixed blessing. This is definitely the case with NMC’s recent disc of Helen Grime‘s music, Night Songs. i’ve enjoyed and written about Grime’s work on a number of occasions, but this album—which, helpfully, arranges its contents in chronological order—contextualises those works such that rather glaring problems instantly emerge. Chief of them all is the extreme narrowness of Grime’s compositional language, with regular recourse to precisely the same mannerisms and tropes in pretty much every piece. Take a drawn-out melodic line, put it mid-register and not too loud, adorn it with sharp staccato notes (woodwind or pizzicato strings) and far, far beneath it have grumbling deep bass phrases. This kind of thing has worked for Oliver Knussen, and on the basis of this disc, Grime seems to feel compelled to introduce this same device into everything she writes. It’s an irritation that gets compounded by the timidity of Grime’s orchestral writing; not merely her safe, familiar use of the instruments, it’s the lack of anything approximating a release, a true letting-go of control, that makes the majority of the seven works on this disc feel so thoroughly grounded. Striving for equilibrium doesn’t require one to be so equivocal. 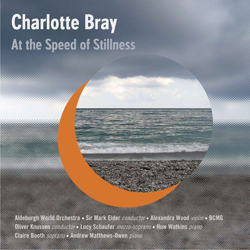 More successful by far is NMC’s latest Debut Disc exploring the work of Charlotte Bray. The title piece, At the Speed of Stillness, was one of the best Proms premières in recent years (my review is here), and it holds up even better in this more revealing context. The wealth of detail in the work’s textures is deeply impressive, as is Bray’s willingness to break off a line of enquiry in favour of something unexpected, without derailing the piece. And the work’s climaxes are as epic and overwhelmingly exciting as they were in that first performance. Of the other works on the album, the selection of songs from her cycle Autumn Leaves stands out most; it’s a real shame the entire collection wasn’t included (in contrast to most labels, NMC seem reluctant to exceed 71 minutes on a disc), as the emotional impact of these songs is very strong. Soprano Claire Booth negotiates superbly between wildly conflicting moods, including passion, rage, and stubborn grief. Overall, though, this is an album not so much showcasing masterpieces as considerable promise of things to come. 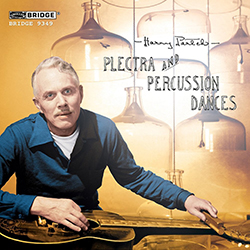 Questions instinctively arise listening to Plectra and Percussion Dances, the new CD from Bridge exploring the music of Harry Partch. It’s good, of course, that the years of derision and neglect are being answered today with a more open mind and the chance for a fresh appraisal of Partch’s work and outlook. The great success that has met performances this year in Edinburgh and Bristol are proof of the interest in his music. But, like Schoenberg before him, Partch’s emancipation of harmony tends to highlight how conventional he was in many other respects. His rhythmic language, in particular, for all its hiccups and distortions, is usually very regular, as is his general approach to melody and accompaniment, with a strong (albeit unusual) cadential sensibility. All the same, though, Partch’s music is wonderfully out of step with the majority of concert music you’re likely to hear, even in 2014. Castor & Pollux, which opens the disc, starts out (as much Partch does) appearing stiff and ritualistic, but in truth it is theatrical more than anything else, evoking Eastern modes of dramatic expression. Often’s the time that this music feels like it’s lacking an essential visual component—the final work on the album, Even Wild Horses, is even subtitled “Dance Music for an Absent Drama”—a need that is vividly fulfilled when the music is performed live; on CD, it can sometimes seem frustrating in this respect. But not in his 1950 Ring Around the Moon, a short but brilliantly weird work in which Partch proves himself a true radical, rejecting most notions of classical comportment and even coherence. Its enthusiastic jumbling of ideas in a heady stream of conciousness, replete with hilarious outbursts of nonsense text, sounds like a forerunner of Frank Zappa; its subtitle, “A Dance Fantasm for Here and Now” could hardly be more accurate. 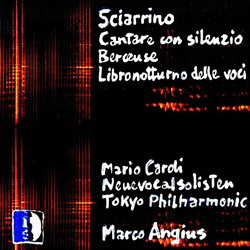 A much more fully-rounded and mature radical than Partch is Salvatore Sciarrino, shown off to superb effect on a new disc on the Italian Stradivarius label, featuring three works dating back 45, 15 and five years respectively. Both the title work, Cantare con silenzio, and Libro notturno delle voci focus attention on the flute. The former places it as a counterpoint and to some extent devil’s advocate in relation to the work’s six voices, percussion and electronics, a force of unchecked violence within a heavily formal, ritualised context. In the latter work, effectively a concerto, the flute is more ambivalent in relation to the orchestra, and at times is even lost, particularly in the brass-heavy middle movement, yet it steers everything towards a beautiful, bizarre conclusion, festooned with hard-to-discern glinting shapes and curious low sounds. But it’s the oldest piece on the disc, Berceuse, that makes the biggest and most lasting impact; genuinely one of the strangest orchestral works i’ve heard, like a seething, roiling organic mass, acting in waves of dense, surging material, it’s as inscrutable as it is hypnotic, relentlessly holding one’s attention. 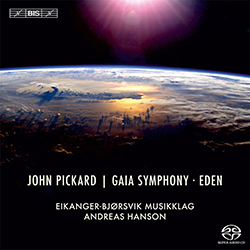 My first encounter with John Pickard‘s glorious Gaia Symphony was on a car radio, driving into the town of Whitby, an experience that resulted in pulling over as quickly as possible and listening in rather awe-struck silence. Music for brass and percussion doesn’t come much more ambitious than this work, which has recently been released in a new rendition by the Norwegian Eikanger-Bjørsvik Musikklag, available on BIS. Pickard’s writing is simultaneously accessible and disorienting, opting for a mode of speech that works as well as it does because it relies on elementalism rather than narrative. The 65-minute symphony carves huge, rough shapes but handles them as though they were fluid, forming them into pounding rhythms and pseudo-fanfares, covered (although this isn’t always obvious) with the most intricate details, heard to stunning effect in the ‘Tsunami’ and ‘Wildfire’ movements. But equally the gentler writing, opening up vast vistas with the most restrained economy of means, is just as impressive; third movement ‘Aurora’, evokes the northern lights in this way, primarily melodic but regularly passing through thick clouds of harmonic texture. Closing movement ‘Men of Stone’ acts as something of a synthesis of the work as a whole, the breadth of its dramatic scope becoming almost too much to take in. It’s a tough challenge for the Eikanger-Bjørsvik Musikklag not merely to bring off such an enormous work as this, but to rival the landmark recording of the piece made in 2005 by the then Buy As You View Band (who also gave that memorable radio performance i mentioned). This disc testifies to how successfully they’ve responded to that challenge, revealing even more of this amazing work’s inner complexities. 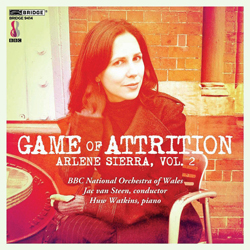 The orchestral disc that’s recently left me reeling most, though, is the second volume of Arlene Sierra‘s music, out now on Bridge. It features four works that offer an interesting counterpoint to her chamber music, with its ongoing interest in birds and insects. Although Sierra doesn’t abandon those concerns in an orchestral context, these large-scale canvasses feel in many ways utterly removed. She makes, i’m delighted to say, absolutely no attempt whatsoever to make these works easy on the listener—indeed, a couple of them, the piano concerto Art of War (my review of the world première of which is here) and title work Game of Attrition, seemingly begin in medias res, plunging without any preparation or warning straight into the heart of their respective arguments. This isn’t by any means the only way Sierra establishes formidable levels of excitement in these works; she’s prepared to unleash the most unstoppable onslaughts, often with a cutting ferocity that immediately makes one think of Varèse. Put simply, her tuttis hurt. All the more so because all four of these pieces have very strong melodic identities, and rhythmically display a tendency (as much of Sierra’s work does) to fall into dance-like patterns. Alongside such playfulness as this (the clearest point of similarity to her chamber music), rousing the orchestra to such massive levels of muscular immensity is heart-stoppingly effective; in her hands, the orchestra becomes utterly intimidating, acting both as beacons to truth—making the machinations of Art of War (a work not so much about war as the coercion and manipulation necessary for it) brutally, painfully plain—while also revelling in the simple joy of music-making, captured in the colossal sonic pile-ups of Moler and Aquilo, the former of which is surely one of the best concert-openers of recent years. In a word—and it’s nice to be able to use this word literally for once: breathtaking.

[…] amidst heavier forces. The oldest work on the disc, Berceuse, is wonderfully weird, summarised in my original review as “like a seething, roiling organic mass, acting in waves of dense, surging material, it’s […]