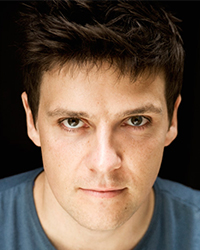 One of the most unusual concerts at HCMF 2014 was given by Spanish ensemble CrossingLines. When i say ‘unusual’, perhaps i mean ‘impenetrable’; most of the works in the concert, by composers from Spain and Chile, were challenging to the point of wilful oddity. There was, however, one glorious exception: π by CrossingLines artistic director Luis Codera Puzo, a work for trombone, electric guitar, double bass, glockenspiel and electronics. The title is a simple metaphor, Puzo embracing π’s twin nature, being a defined, constant quantity yet irrational and therefore impossible fully to describe. For Puzo, this becomes a sonic duality, “something with a clear and unequivocal presence, which is real and concrete, and at the same time is something which cannot be pinned down, which resists any kind of complete codification”.

This becomes manifested in various ways. It’s perhaps unusual to ascribe dynamics as a primary compositional element, but Puzo has deliberately created the majority of his material such that it sounds achingly fragile, strange little soft sounds that tremulously fit together into a texture that coheres yet which often sounds barely more substantial than a piece of graphene. This texture is essentially comprised of pitch, but these, too, through a combination of being tiny, ephemeral and/or unstable, fight against definition. And then there’s behaviour: just as we’ve got used to the group’s modus operandi, they abruptly stop, leaving just a solitary, soft extremely high tone resonating from somewhere. One soon senses that in π, Puzo is interested not so much in what is said than in how it is being spoken. An integral part of this is the fact that, although sounds seem ostensibly connected, is this really counterpoint? (The wide separation of the instruments helps to complicate this perception very effectively.) The squirming, indefinable nature of the music becomes increasingly muscular—although this, also, is a process rug-pulled via an unexpected general pause and various subsequent retreats into restrained pointillism. It’s therefore a little inaccurate to describe π’s conclusion as ‘climactic’, as it’s essentially not a culmination of what’s preceded it, but instead a non sequitur determination simply to let rip. It happens because it happens. And it happens wonderfully, fierce buzzing walls of coagulating noise, loud and full and strong, yet never harsh or oppressive; it’s a radiant, even ecstatic end to a magnificent piece. Composers often seek to find convincing ways to defy notions of definition (Luke Bedford’s Instability makes for an interesting comparison in this respect), but they rarely achieve it with such bracing cogency as this.

The first UK performance of π was given by CrossingLines directed by Lorenzo Ferrándiz.

I began to be interested in modular synthesisers in 2012. Creating music with these instruments has been a completely different experience from my previous work: by its very nature, it is music which escapes notation, and creating music with these synthesisers is closer to improvisation than to composition. A great deal of the time I have dedicated to music in recent years has involved listening, playing or reading about synthesisers, and the result has almost always been private, or simply a waste of time a questionable concept, probably. Alongside this, in 2013, I came into contact with the free improvisation scene in Barcelona, which produced a powerful change in my tastes and a considerable broadening of my musical interests. These new influences stand, paradoxically, at the opposite extreme to what defined me as a composer, probably characterised by the desire to control all the parameters of a piece. I believe there really exists a pleasure – a dark pleasure – when we get close to that which we have not yet become. It is, in short, the personal integration of the idea of multiplicity; painful, certainly, and complicated, but also euphoric if one survives one’s own death. π (2014), for electric guitar, trombone, double bass, glockenspiel and electronics (almost entirely comprised of modular synthesisers) reflects these two sides which had begun to clash, along with many other indiscriminate influences, such as the music of Feldman, Webern, Pedro Álvarez and Otomo Yoshihide, Noise, Drone music, and the ever increasing tendency to undertake personal – almost intimate – projects with musicians sympathetic to my way of understanding the work of music. The number π, transcendental irrational number, whose total digits – in spite of its being a constant – are not known, is an appropriate metaphor for the duality which the piece hopes to reflect: something with a clear and unequivocal presence, which is real and concrete, and at the same time is something which cannot be pinned down, which resists any kind of complete codification. π seeks to show these two sides, and facing the second one meant calling into question certain aspects that defined me: elements appeared that described what, before, I had not considered to be music and, likewise, a formal organisation that I would earlier have considered to be erroneous – a clear example is the sound mass at the end: deliberately too long, being just on the border between a lot and too much where discomfort and attraction begin. In sum, I must confess that I don’t have the remotest idea of what π is, nor probably what it means to make music. The work sets out a number of very specific acoustic needs (the electronics part oscillating between subtle and massive, and the always tricky electric guitar sound) and the recording would have been impossible without the favourable conditions made possible by the Ernst von Siemens Music Foundation – the work is written in thanks to them for the incredible support they have given me – the involvement of the L’Auditori de Barcelona, the CrossingLines ensemble and, especially, without the inestimable help of Santi Barguñó and Hugo Romano Guimarães, two excellent producers and technicians on whom I was able to rely for the recording and the interminable editing sessions, and without whom I wouldn’t have found the sound of π.