Estonia in Focus weekend: Tatjana Kozlova-Johannes – To My End and to Its End… (World Première)

A few months back, i reported on the goings-on at the Estonian Music Days, the second year running that i’d attended the festival. During this time, i’ve become increasingly interested in the country’s new musical endeavours, which for various reasons – both our fault and theirs – remain almost entirely unknown and unheard here in the UK (in one of my articles i outline some reasons why). i’m therefore going to address that by devoting a couple of long weekends to focusing on some of the more interesting music i’ve encountered from Estonia recently. It’s fitting to feature the first weekend now, as today is Võidupüha, ‘Victory Day’, when Estonians celebrate a military victory against the German forces in 1919 (the Battle of Võnnu), part of the Estonian War of Independence that continued until 1920. The memories and scars of Estonia’s back-and-forth with independence throughout the twentieth century have played and continue to play a major part in its cultural life and identity, a fact that will probably emerge in some of my forthcoming discussions about their music. For this weekend i’m focusing on the type of music for which Estonia should perhaps be most loudly celebrated: choral music.

By far the most outstanding new choral work that i’ve heard in recent times – both from Estonia and, i suspect, anywhere else – is Tatjana Kozlova-Johannes‘ To My End and to Its End…, which was premièred in Tallinn back in April. For her text, Kozlova-Johannes has turned to the late Palestinian poet Mahmoud Darwish, setting most of his poem from which the work takes its title (the entire poem can be read here). The poem speaks of a difficult and dangerous journey Darwish and his father made across the Lebanon-Palestine border (he and his family had been forced to flee to Lebanon during the 1948 Palestinian war), made under cover of darkness and with death an omnipresent possibility. Kozlova-Johannes has removed the few lines that mention geographical specifics, enabling the text to speak more generally about the threat posed by nearby borders. This is particularly apt from the perspective of Estonia, who only wrenched back their independence from neighbouring Russia in 1991, and where a palpable sense of disquiet – exacerbated by the sabre-rattling reign of Vladimir Putin – persists today. Furthermore, the fact that Kozlova-Johannes is herself Russian-born – she settled in Estonia in the mid-1990s – adds an extra layer of potency to the subtext. 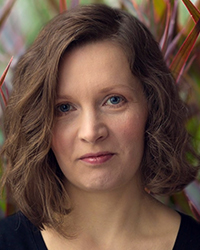 Darwish’s poem is presented as a dialogue between father and son, each expressing concern and encouragement for the other. Rather than doing the obvious thing of resorting to just two voices in the foreground, Kozlova-Johannes’ approach is to employ the full choir in two different ways: as a group of individual soloists and a large united collective. The latter of these guises is apparent first, establishing a delicate, nocturnal atmosphere of stillness and dread, soft semitone oscillations permeated by a stream of exhalations that bring to mind both desert winds and the panting of the protagonists. The soloistic guise now enters this space, passing the words of the dialogue from voice to voice; the indiscriminate use of gender here lends the text a transparent universality, turning the conversation into the words of anyone and everyone who has ever found themselves fearing for their lives in such terrible circumstances. Beyond this, the words – articulated with a mixture of melismatic and recitative-like passages – are treated with great care, neither rushed nor lingered over; one might almost describe it as ‘matter of fact’ though nothing in the piece comes remotely close to justifying that. The relationship between words and accompaniment is similarly multifaceted; on the one hand, the shifting, sliding harmonies that underpin the piece – never ceasing at any point in its ten-minute duration, and often stunningly gorgeous – act to couch the dialogue, supporting it with the aural equivalent of a healing balm. Yet, on the other hand, there’s a distinctly ominous quality to the low registers and deep drones that recur at various points, not to mention the sagging quality of the complex chord progressions – like an exhausted version of Delius – that speaks volumes about the overwhelming tiredness and fear that, despite the music’s attractiveness, is omnipresent. One can imagine that the piece might collapse at any moment, dragged to the ground by its own weight. As such, when the work finally reaches its end, the music is not so much final as simply a point where it stops, the stability of its last triadic chord – not remotely cadential – riven with ambiguities. It’s clear that we’ve glimpsed a mere window into a much larger, ongoing predicament.

i cannot think of another recent choral work that has encapsulated so imaginatively, so completely, so immediately and so movingly such multi-layered intensity of expression as this piece does. The way that Kozlova-Johannes manages to make the music bleak yet ravishing, enervated yet optimistic, is wondrous. Everything about it is simply staggering.

To My End and to Its End… received its world première at the Niguliste Church in the centre of Tallinn on Saturday 8 April, by the outstanding Estonian Philharmonic Chamber Choir conducted by Kaspars Putniņš. It was the only piece in the concert not to have a programme note, but rarely has a work needed one less. This recording is taken from the live broadcast on Estonian radio (ERR), and my apologies for the occasional moments of distortion which were part of that broadcast.