Last weekend i made a pilgrimage to the far south-west of England to catch the latest concert given by (as far as i can tell) Cornwall’s one and only contemporary music ensemble, Kevos. The title of the concert, named after one of the works being performed, Old Kings in Exile, gave me pause to consider the somewhat exiled nature of Kevos themselves, located so very far from the usual locations we more readily associate with new music.

Directed by Patrick Bailey, on this occasion they presented five works, including a world première. It’s worth saying that, as he had the last time i saw Kevos in action, Bailey gave a short introduction to each piece, and they could hardly have been more perfect: enthusiastic and explanatory without in any way over-simplifying things for the sake of the audience; they really left you wanting to hear what was to come. That being said, not everything in the programme entirely lived up to Bailey’s keen words. Mark-Anthony Turnage‘s Grazioso!, though entertaining, seemed to exhaust its ideas relatively quickly. As such, there was the strange sensation that it was almost a piece in the style of Turnage rather than an authentic original, but it was nice to hear the irony of its title expressed in such a relentless way, like an exaggerated rendition of some much more mellow existing music, pushed here to extremes. Castles in the Air by young composer Oren Velasquez Hirtenstein was supposedly a memorial to Oliver Knussen, but it was difficult to engage with it on anything beyond an intellectual level. It’s perhaps revealing that Hirtenstein’s programme note commented on his having “cracked the code to one of Knussen’s favoured compositional devices”; what we heard sounded very much like the product of code-breaking: cool, calculated and methodical, but without any significant warmth or emotional depth that one might expect from a piece written in memoriam. 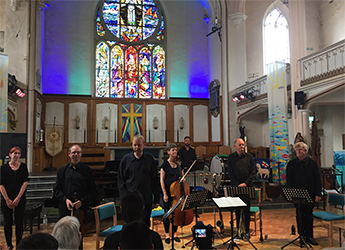 More telling were a pair of works by Alison Kay. i included a piece of Kay’s, Flux, in my 2014 Lent Series and remarked at the time how it would be good to hear more of her music. However, further opportunities have never happened until now, perhaps in part due to the fact that Kay has, according to one of her programme notes, taken a five-year gap from composition. The effect of the hiatus was instantly apparent: her two pieces in this concert were a world away from the energy and ebullience of Flux, but they also differed quite markedly from each other. Spirit dates from last year and “does not try to do or be anything”, no doubt due to being written as a tribute to Kay’s late mother. It was nonetheless impassioned and melancholic, and early on appeared to have twin layers, one melodic the other embellishing, which later become more behaviourally integrated. Kay’s new work Orison was less overtly simple and more elusive; it managed to be quiet but urgent, even exhibiting a kind of soft desperation. In a more striking way than in Spirit, clouds of shimmer surrounded its melodic lines, creating a tension that hinted the music was a lot more than just calm and peaceful, exacerbated in the work’s abrupt end. It was all very beautiful, and one of the more enigmatic new works i’ve heard in a while.

The concert concluded with Brett Dean‘s substantial Old Kings in Exile, another work connected to loss, in this case Dean’s experiences with his father’s dementia. This wasn’t expressed in anything like a simplistic exercise in decay or erosion. Instead, Dean’s material for the most part was strikingly robust, forming dense, florid episodes that whipped along with real fluidity. It even subsequently became dance-like, the ensemble bound together in triple metre in what was not so much counterpoint as multiple simultaneous strands, each equally insistent. Though characterised by its capacity to soar and swell – in which flautist William Sleath’s solo passages were excellent – there were times when Dean made the music slow down and sink, even become static, signs of a less certain quantity that was more emphatically articulated in the work’s book-ending prelude and postlude. Though in different ways, both were intensely solemn, the latter an uncomfortable network of shaking undulations conveying an otherwise steady music uncomfortably riven with tremors, the former turning Kevos into a strained, wizened cortege, their slow progress forward countered by a sense of stasis, as though the players were held in place.

It’s heart-warming and impressive to see small-scale ensembles such as Kevos putting on ambitious, challenging concerts like this. As i’ve commented previously, it’s not merely good but vital that remote ventures such as this are supported as vigorously as possible – so it was encouraging to see the nave of St Mary’s Church in Penzance pretty much full on this occasion. Kevos’ next concert will be in November, this time located in St Endellion on the north Cornish coast, and will include music by Judith Weir and Helena Tulve. The group’s activities can be followed on their website and via Twitter and Facebook.