Founded in 1888, the annual Nordic Music Days is one of the oldest contemporary music festivals in the world. It’s a peripatetic festival, moving from place to place each year, and for 2019 – surprisingly, for the first time – it moved north of the Arctic Circle, to the small town of Bodø (‘boo-duh’) in the north of Norway. As its name suggests, the festival is an opportunity for composers and performers from throughout the Nordic region to meet, collaborate and showcase to the wider world the range and diversity of their music-making.

The country that unfortunately came off worst this year – with disappointing consistency – was Denmark. Niels Lyhne Løkkegaard took no fewer than 50 triangles for his Triangular Mass – and then gave them little more than a continual, barely-changing tremolando for ten minutes. That was boring enough, but the fact that the work was conceived to be performable by any group of people, irrespective of musical training, only made such basic material seem not merely deficient but patronising; non-musicians are capable of a great deal more than just that. Loïc Destremau‘s string quartet Spoken Music had more going for it, but it was one of a number of pieces at NMD 2019 that became so interested in either technical or extra-musical elements that their actual musical interest was greatly reduced. In this case, while Destremau’s exploration of how speech can modulate conventionally-performed materials by the quartet was an interesting idea, the actual resulting music was extremely dull. 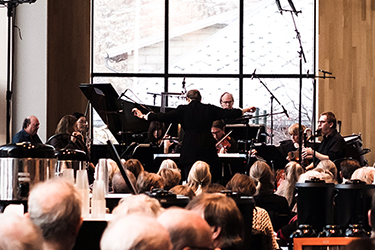 i’m still trying to decide whether Allan Gravgaard Madsen‘s SUITE was simply the wrong piece of music at the wrong time or just a poor piece of music full stop. Cikada gave the work its Norwegian première at a free lunchtime concert in the foyer of Bodø’s grand concert hall Stormen. The combination of the space being filled for the most part with attendees of a more well-aged disposition with the music’s often protracted interest in very soft sounds – many of which were practically inaudible – resulted in an increasing number of evidently impatient walkouts. The piece had some nice moments – particularly the first movement’s evolution from quasi random sharp attacks into the forming of a rhythmic language, and a wonderful gallumphing triple-metre dance with all of its pitch content erased – but its tendency to pursue its ideas way longer than they deserved led to me feeling just as impatient as the local pensioners. 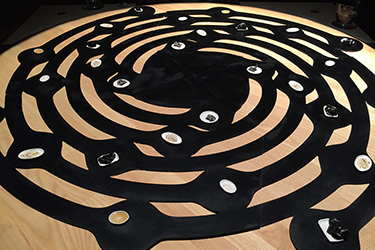 The most interesting Danish contribution to NMD 2019 came in the form of Tasteful Turntable, devised by brothers Lars and Nikolaj Kynde. Described as a ‘Symphony for Mouth and Ears’, and presented in the form of a dinner, its five courses (or movements) involved the eating of small portions of food, served on elaborate spiral shapes on a slowly rotating table, while listening to synchronised portions of sound. It provoked some highly unexpected responses, such as the sensory friction when eating something unpleasant while listening to something enjoyable (and vice versa). This in turn led to considerations of the extent to which the culinary arts can harness concepts such as consonance and dissonance, or crescendo and diminuendo (the latter achieved with different forms of carrot). It’s true to say that the the work very deftly managed to make taste and hearing merge into a single, dual-faceted sensation that’s left me thinking a little differently each time i eat. It would be fascinating to explore this concept further in works melding other senses with sound. 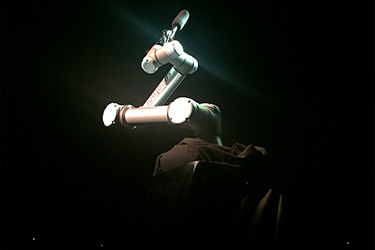 Sweden made a much stronger impression during the festival. Fredrik Gran wielded a large robotic arm fitted with a sensitive microphone for his work Here in my arms. The movements of the arm set up ever-changing quantities and qualities of feedback caused by its invisible interaction with an array of speakers round the edges of the space. This led to some effective disconnects, the most obvious being the careful, precise movements of the robot being met with abstract, quasi-arbitrary pitch shapes, occasionally coloured by the microphone picking up traces of its own mechanical and/or motor noise. It was intriguing to try to form connections between the arm position and the resulting sound, though this invariably proved impossible, causing a tension in trying to decide whether to watch or just listen. However you experienced the piece, there were one or two stunning moments along the way, such as when a deep penetrating throb warmed into a soft triad, and the way Gran improbably managed to effect the sense of a two-part invention of sorts between upper and lower frequencies. 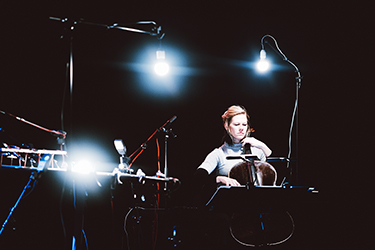 Cellist My Hellgren was turned into something not unlike a robot in Johan Svensson‘s Marionette. Initially, there was a clear sense of hierarchy, Hellgren’s physical actions on the cello being translated in real-time by a complex mechanical and electric system comprising lights, fans and scrapers among other things. So closely aligned was this relationship it was as if the gadgets became the imagined interior of Hellgren’s body and brain. However, as the work progressed the relationship developed, first into a human-machine duet, and eventually to the point that it was as if Hellgren had become an automaton (echoes here of some of Simon Løffler’s work), perhaps even a reversal of the opening state, Hellgren now being controlled by the mechanics. This was reinforced by a wonderful coda in which three light bulbs uncannily engaged in their own free-will dance, independently of the cello. A fabulous piece that blended perfectly its visual and sonic elements into a seamless, dramatic choreography. There was a different but no less impressive kind of computer-performer relationship in Joakim Sandgren‘s Bifurcations Simples. Horn player Sören Hermansson projected air and percussion sounds on and through his instrument, which became exploded into an electronic tapestry of rhythmic convolution, with noisy and occasionally almost pitched blasts of wind hitting us from all directions. Being in the midst of it was seriously exciting. 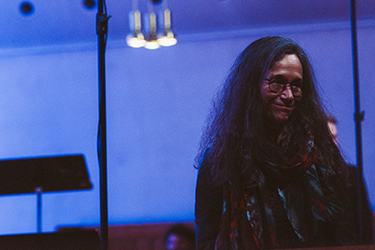 One of the occasional annoyances of this year’s Nordic Music Days was the lack of texts for some of the vocal works (a mistake that no festival should ever make), but in the case of Terre de l’absence (Earth of absence) by Madeleine Isaksson it didn’t seem to matter. Beautifully performed by Vocal Art in Bodø Cathedral, the searching, struggling, sighing nature of the music, sometimes becoming fraught, was immediate and clear throughout. More importantly, though, it had one of the most stunning final chords i have ever heard, the singers slip-sliding their notes into position, before embellishing the chord with gentle overtone singing. It was incredible. After the performance Isaksson was awarded the Swedish Rosenberg Prize; on the strength of Terre de l’absence she most definitely deserves it. 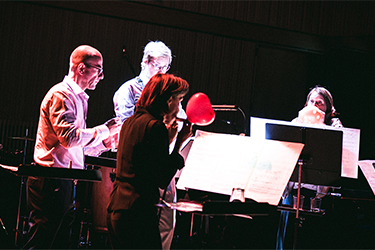 But if a prize was given to the most breathlessly exuberant work performed at NMD 2019, it would probably have go to Ansgar Beste. In his Mascarade Obscure, the members of Esbjerg Ensemble were reduced to just the mouthpieces of their instruments, which were played into full or empty glasses or had balloons and other implements stuffed inside them. That sounds like the kind of novelty typical of rather too many new music concerts, yet Beste wasn’t interested in this purely for its comedy or oddity value. Taking inspiration from “dance rhythms of popular music from nowadays and centuries gone by”, the work was a cavalcade of rhythmic counterpoint and metric gear-changing. There was always the sense that pitches were enthusiastically being attempted by the players who, far from being daunted, seemed to revel in the absurd mayhem that resulted. The work’s balance between raucous entertainment and focused musical integrity was absolutely perfect, making for a simultaneously fun yet engrossing experience. 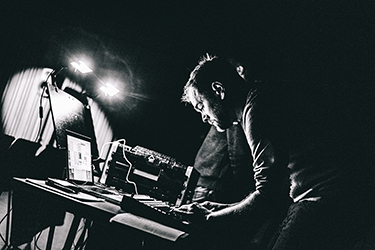 Finland’s contribution to NMD 2019 was exemplified best by a song cycle, an acousmatic work and a miniature duet. Minna Leinonen‘s Hush for flute and percussion was inspired by the disruption following the birth of her first child. Performed by Esbjerg Ensemble’s Kerstin Thiele and Christian Martinez, the piece was brief and touching, obviously deeply personal, combining hints of lullaby with more forthright bursts of self-expression. On the strength of his album Post-biological wildlife, reviewed a few months back, i was excited to hear Finland-born, Norway-based composer Juhani Silvola‘s new electronic work Five failures in representing our true nature, receiving its world première. It did not disappoint, coming across like an anthropological field recording from an alien habitat. Though often sounding entirely different from everyday reality, its sounds heightened, stylised and abstracted, yet the work often drew surprisingly close to home. Even at its most aggressively artificial – hugely impressive in this performance – there was nonetheless something lyrical, perhaps even real (voices, maybe?), lying at its core, becoming a thread connecting us to tangibility. In every sense of the word, it was a fantastic piece. 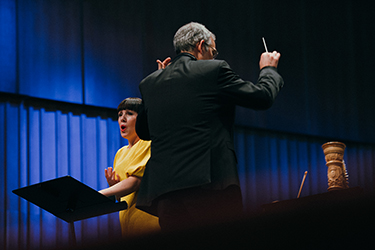 One of the undoubted highlights of the festival was Kaija Saariaho‘s setting of texts by Amin Maalouf, Quatre Instants. Its musical language melds a luscious, bejewelled demeanour within an edgy, mysterious atmosphere. As such, though spacious and ravishing, even opulent in character – sounding as if there were many more players on stage than the modest forces of the Arctic Philharmonic Sinfonietta – this was matched and even militated against by an intense, pervading turbulence. Love infuses every sentence and sentiment of Maalouf’s words, but at times this emerged in a powerful back-and-forth between lyrical passion and ferocious anger. Carrying all of this emotional weight was soprano Berit Norbakken Solset, whose rendition of each song was astonishingly gorgeous, making them deeply moving. Nowhere more so than in the third of the songs, ‘Perfume of the instant’, its enraptured, intimate sensuality practically inducing the sensation of wafts of fragrance in the concert hall. Throughout the work, Solset made the music marvellously tactile, her voice seemingly communicating to each one of us in the audience personally. i can honestly say that if this was the last performance i ever heard, i would have died perfectly happily. Amazing.