It’s many, many years since i spent meaningful time in the company of music by Can, so i went to founder member Irmin Schmidt‘s HCMF piano recital last Thursday with precisely no expectations. What transpired was one of the most mesmerising, understated performances that i’ve ever witnessed in St Paul’s Hall. Though Schmidt was performing three works – derived in part from his album 5 Klavierstücke, released last year – they essentially coalesced such that they became three facets of a single train of thought. The innards of the instrument had been intricately prepared with an assortment of screws, rawlplugs and other gizmos, but this was a whole lot more than just a standard prepared piano. In the way Schmidt played, there was no qualitative difference between the prepared and natural notes – they all sounded as though they were an essential, intrinsic part of the piano’s tone of voice, so to speak, articulated with different kinds of timbre and pitch focus. 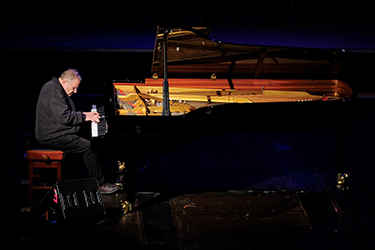 As for the music, what stood out most was its beautiful sense of pace and the complexity of its attitude: aggressive, gentle, lyrical, uncertain – it was wonderfully inscrutable, elusive but with an immediate emotional sensibility. Later, the piano’s soundworld was expanded with fixed media, leading to a delightful balance between the rhythmic regularity of dripping water and Schmidt’s slow meandering in Nocturne I, ultimately arriving at a stasis of sorts, the two locked together seemingly for eternity. As its name implies, Yonder had an altogether bigger scope, the piano now in the midst of chiming bells (again providing regularity). As i said previously, though, the different pieces functioned as discrete sections in a much larger, cohesive act of contemplation, one that was difficult to put into words due to the intensity and authenticity of Schmidt’s performance. 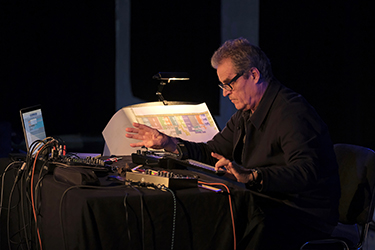 Another work i experienced with precisely zero expectations was NULL by Italy-born, Switzerland-based composer Luigi Archetti. Surely one of the lengthiest works ever to have been performed at HCMF, the seven hours of NULL were divided up into two sessions that occupied most of last Friday. i stayed for three hours, and the reason i left was not exactly because i was no longer interested in it, but more because by that stage Archetti had given a pretty good indication of the nature, character and structure of the piece. All derived from a guitar laid flat in front of him, its output heavily processed, NULL is an episodic piece, moving between centres of well-defined behavioural activity. A good analogy for this is M. C. Escher’s famous Metamorphosis works (particularly, considering its length, Metamorphosis III), in which the material is in a continual state of flux, moving between discrete, identifiable focal points – fish … birds … horses … chess – yet never lingering on them, continually transforming into something else. Likewise (though at a slower pace), Archetti’s music metamorphosed between behavioural focal points: twanging drones overlaid with a granular texture; soft electronic ‘beats’ situated within a cloud of ambience; polarised pitches either side of a beautiful middle-grounded steady state; high semi-regular pulsations over a multi-layered throbbing.

Likening NULL to the Escher perhaps suggests a certain kind of uniformity to the piece, but in practice there was a high degree of unpredictability, Archetti at times appearing to overhaul the music in its entirety in just a few seconds, in the process shifting from gentle cushions of buoyant sound to squalling eruptions of noise, or where the sudden appearance of vast accents was countered by a swift retreat into soft burbling. However, over time this unpredictability became an integral part of its process of metamorphosis. In Escher’s Metamorphosis III we can’t tell in advance what direction the artwork will take next, but we know that it will take a new direction soon, and we also know – more so as the work continues – the general scope and nature of those changes. And so it was with NULL, to the extent that its interest became more and more dependant on the vitality of each transformational shift, and for me this led to the work having an increasingly arbitrary sensibility. So while individual sections or sequences (or even brief moments) were very striking, they ended up sounding like happy accidents in a larger and more unengaging universe, the palette of which was itself starting to sound somewhat exhausted. This didn’t at all affect or in any way diminish my retrospective deep enjoyment of what had gone before, but it also didn’t provide a compelling reason to stay for the remainder of its duration. 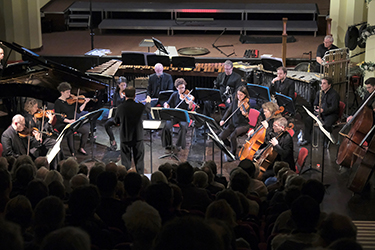 Another piece that drew comparisons with visual art, deliberately so, was Georg Friedrich Haas‘ new work for large ensemble Homage to Bridget Riley. Despite that obvious reference in the title, the relationship between the aural and the visual was very far from being anything like a parallel, and while this didn’t make Haas’ music any less impressive, it’s nonetheless an important distinction to make. What Haas’ music didn’t possess was the geometry of Riley’s work, the stark simplicity of its elements that, in turn, causes all manner of unwitting and involuntary perceptual illusions to arise. Consequently, while Haas’ Homage certainly had immensity, it lacked something of the blunt monolithic character that enables so many of Riley’s pieces to make us stop dead in our tracks. In this regard her work often reminds me of the literal monolith from Kubrick’s 2001: A Space Odyssey, a tangible yet enigmatic object that invites fascinated scrutiny but defies easy comprehension.

But then, a musical homage doesn’t need to act as a representation or sonic equivalent of its object, so none of this really mattered. To be honest, if Riley hadn’t been tagged in the title the piece simply comports itself like pretty much any other work by Haas in recent times, combining the composer’s penchants for enormity, strategic and sometimes puzzle-like harmonic structures, and behavioural playfulness. One of the things i’ve come to love about Haas’ music is the way it sets up large-scale environments – often, as in this case, where there’s no place or role for silence – that feel as if they completely envelop us. It’s not just about immersion (though it is about that), but also the way that this enables us to become more aware of the subtleties of what’s going on within the music, because we’re within it ourselves. A lovely feature early on, acting as a countermeasure to the work’s slithery, trilly nature, a network of absolute unrest in the strings, was the way Haas introduced clear triads from instruments unable to sustain (piano and vibraphone). These triads acted like ‘anti-earthquakes’, hypocentres that reduced and calmed the ongoing turbulence, complete with subsequent ‘anti-aftershocks’. This was one facet of a larger tension running throughout the piece between clarity and obfuscation, though the latter dominated so heavily overall that it left me wondering whether Haas’ music would have benefited from more of the precisely-judged balance evident in Bridget Riley’s works. That being said, though, to be in the midst of one of Haas’ extensive exercises in textural process (bringing to mind and acting as a modern day successor to the classic texture works of Ligeti) is always a fantastic concert hall experience, and while his Homage to Bridget Riley is arguably the most tiring of them all, it never stopped being interesting for even a second. 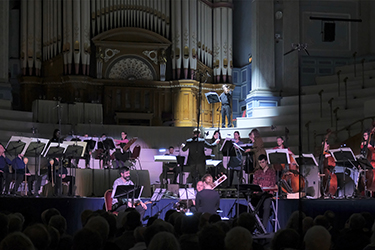 But when it comes to sustained interest, no composer during my two-and-a-bit days at HCMF came remotely close to that achieved by Frank Denyer in the world première of his hour-long extravaganza The Fish that became the Sun (Songs of the Dispossessed). Completed a quarter of a century ago, to perform the work took the combined forces of Octandre Ensemble, Consortium5, the New London Chamber Choir, members of the RubyThroat ensemble, and percussion students from Trinity Laban Conservatoire, all jointly conducted by Holly Mathieson and Jon Hargreaves. Huddersfield’s Town Hall has seen some impressive, colossal performances at HCMF over the years, but i’m not sure anything has rendered me so speechless, so overwhelmed and so enraptured as this piece. And i have to admit: anything i write about it will be wholly inadequate. i was conscious of the fact that there were performers all over the stage, and possibly in the balconies too, but i realised within even the first ten seconds that keeping my eyes open – always a temptation in ambitious, visually unusual works like this – was going to be a complete distraction. So from my vantage point, i had no idea who was doing what, how they were doing it, where they were doing it, or indeed a lot of the time what instrument they were doing it on.

None of this mattered; if anything, it only made the experience yet more unfathomably wondrous. The piece seemed to have no clear geographical foundation: we might call it ‘ethnically neutral’, yet the way Denyer harnessed sound didn’t so much suggest no place as all places, a universality that here and there glanced against familiarity within an altogether larger, unfamiliar context. Balancing this were two vitally important factors. First, The Fish that became the Sun was wonderfully gentle; not always calm, and certainly not always quiet, but conveying an inner momentum that was rooted less in urgency than something in between nonchalance and serenity (but neither of those things). As such, it avoided all signs of ostentation yet never became austere. Second, while i’ve mentioned its unfathomable aspect, the work eschewed any and all notions of pseudo-spirituality and allusions to quasi-mystical hokum; it was instead grounded, earthy, human, honest, real. It spoke to me, sometimes it sang; i’m still trying to get my head around the meaning and the import of its content, but what i know for sure is that this work somehow made me feel connected, not only to it but to those around me – the players, the audience and the wider world – and made me appreciate in a new way how music can act as a profound force for unity. i can’t remember the last time a composition like this left me feeling so hopeful and so happy.