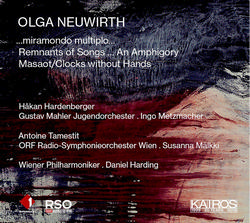 It’s always nice when music you’ve encountered in a previous context finds its way onto disc. That’s true of two of the three works on the latest CD of Olga Neuwirth‘s music, released by Kairos. i first heard Neuwirth’s viola concerto Remnants of Songs … an Amphigory during the 2012 Proms, when it received its UK première. In my review at the time i was particularly drawn to the relationship between the soloist and the orchestra, and that remains one of its most beguiling aspects. However, on the strength of this new recording – featuring soloist Antoine Tamestit and the ORF Radio-Symphonieorchester Wien, conducted by Susanna Mälkki – i’ve found myself revising my opinion about the nature of this relationship. Previously it seemed to be less about collaboration than a kind of rough-and-tumble with mixed levels of friendliness, but here there’s a much greater sense of mutual sympathy. The multiple strains, glimpses and half-echoes of earlier music are a communal impulse, one that, while the viola acts as a figurehead for it, is nonetheless embedded in the behaviour of the orchestra. For me, the second and fourth movements still remain the work’s most compelling sections, the former featuring delicious accompanying sequences where the soloist is distantly surrounded by a network of falling gossamer threads, the latter moving from a dance-like opening into a passionate demonstration of dual interaction, the orchestra letting out emphatic accents that punctuate and reinforce the viola’s ongoing melodic train of thought. Remnants of Songs is hugely dramatic, containing vast climactic bursts of energy, yet it never loses sight of the lyrical mindset that dominates the piece. In that sense, it’s a pretty conflicted work, but that only makes it all the more engaging.

Much the same can be said for …miramondo multiplo…, a work for trumpet and orchestra that Kairos originally included on an excellent 2008 two-DVD set of Neuwirth’s Music for Films. That used a different version of the piece, only using two of its five movements, the music from which became the basis for a dreamy kind of peering into the composer’s mind as we see notation being written onto the score (and occasionally rubbed/crossed out) in real-time. The full version of the work – performed in this recording by Håkan Hardenberger and the Gustav Mahler Jugendorchester conducted by Ingo Metzmacher – displays similar characteristics to Remnants of Songs, particularly the robust relationship between the trumpet and orchestra. As with Remnants, i often found myself paying attention to the periphery, and to the wondrously varied contexts Neuwirth creates for the ‘action’ going on in the foreground. The trumpet is demonstrably the driving force but, again, the way the orchestra acts to support and intertwine its material in and around the soloist is intricately intimate. Here too, the emphasis is lyrical, passing through a welter of contrasting attitudes: motoric, jazzy, soft, strident – with echoes of earlier musics again rearing their head from time to time with varying degrees of clarity. In second movement ‘aria della memoria’, Neuwirth keeps the element of quotation just out of reach most of the way through – as if it were on the tip of the tongue, just unable to be recalled – until suddenly cohering into a sliver from Sondheim’s ‘Send in the Clowns’. More overtly, the spectre of Handel’s aria ‘Lascia ch’io pianga‘ (which, for me, unavoidably always brings to mind the films of Lars von Trier) permeates the fourth movement in a gorgeously familiar yet elusive way that renders it by turns icily distant and warmly affectionate. The odd-numbered movements are generally more volatile, articulated either via quickly-shifting moods or (as in the third movement) by never settling into its stride, being continually held up by pensive asides that only make the music more intriguing.

Both works have an irresistibility to them, but it’s the final work on the disc, the 25-minute orchestral piece Masaot / Clocks without Hands, that’s arguably the most outstanding. Rarely has less than half an hour felt so enormously expansive. Performed by the Vienna Philharmonic conducted by Daniel Harding, there’s a clear interplay going on between the regularity of clockwork rhythms and the nebulosity of textural incoherence (redolent of Ligeti’s Clocks and Clouds). That being said, what’s even clearer is the extent to which it becomes a kind of white hot melting pot of ideas, a multitude of which emerge and churn around together. Keeping track of what’s going on – or, rather, trying and failing to do so – is one of the chief delights of this piece which, every time i’ve listened to it, has left me very happily floundering in its torrent of diversity. The experience is given some certainty through occasions when Neuwirth ‘resets’ things, so to speak, via metronomes, moments of breathing space before we plunge back into its bewildering rich waters. As in the other two works on this album, Masaot also features allusions and references to earlier musics, most prominently brisk folk-like material (replete with oom-pahs) and the makings of a Tudor dance, though often these are quickly lost in the melée. It’s exhilarating to get caught up in such overwhelmingly superabundant music as this, especially as each new listening yields marvels that previously went unheard. However, the close of the work is as unmissable as it is unforgettable, the music dissolving into what sounds like rising bubbles that transform into an upward cascade like a waterfall in reverse.