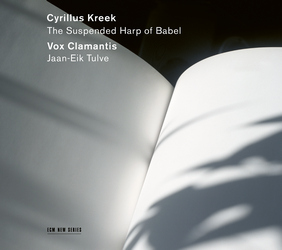 i’ve been waiting for this for three years. At the 2017 Estonian Music Days, i experienced a double onslaught to the head and heart courtesy of choir Vox Clamantis performing the music of Cyrillus Kreek. For this reason more than any other, i’ve clung to the memories of that first contact, and have returned to my recording of the radio broadcast innumerable times since. This isn’t because recordings of Kreek’s music are not available – there aren’t many, but they are there – but the ones i’ve tested have come nowhere close to capturing the magic of his musical language with the sublime intensity of Vox Clamantis. Until now: this month sees the release of The Suspended Harp of Babel, an album devoted to his choral works. Considering Kreek’s stature as arguably Estonia’s first pre-eminent 20th century composer, and Vox Clamantis’ stature as arguably Estonia’s finest choir, plus the surprising fact that this is the first time the choir has committed his music to disc, this release is a big deal, and potentially another double onslaught.

That potential is overwhelmingly realised. i simply can’t remember the last time i’ve been so hypnotically drawn deep into an album of choral music. This is no mere hyperbole, though; one of the most striking recurring features of Vox Clamantis’ concerts is the way they construct them as something akin to liturgies (a superb example of this, juxtaposing ancient and modern, vocal and electronic music, can be streamed via Klassikaraadio). Presented in a way that’s solemn, though without ceremony or fuss, their performances have all the intensity of a rite – no doubt heightened by invariably taking place in ecclesiastical buildings – at which the audience becomes a pseudo-congregation. The Suspended Harp of Babel is something similar; it is no mere compilation.

Such a description might suggest otherwise, but the experience is not simply one that seeks to connect to notions of religiosity. In their concerts, this sacred/secular ambivalence is reinforced by the inclusion of non-religious works, but in the context of this new album – all the texts of which are sacred – the ambivalence comes from the simple fact that it’s all sung in Estonian. i love the Estonian language – it’s beautiful to listen to and, from an English perspective, it seems just mind-bogglingly alien – and on The Suspended Harp of Babel it has something of an advantageous distancing effect in terms of communication. Of course, as with music in any foreign language it’s possible to read the texts in advance in order to glean what’s actually being sung, but the linguistic strangeness of the Estonian tongue enables one to focus more immediately on the intricacies and complexities of Kreek’s musical language. As i’ve waxed lyrically about previously, Kreek’s harmonies are an intoxicating fusion of convention and caprice. They owe part of this gentle frivolity to Estonian and Swedish folk music, of which Kreek was an avid collector; a nice touch on this album is introducing some the pieces with short bursts of and allusions to their folk origins, most strikingly in Mu süda, ärka üles [Awake, my heart], prefaced by boisterous ensemble playing (featuring nyckelharpa and kannel) interspersed with the verses of the original folk hymn. Kreek’s subsequent rendition smooths off the most angular edges of the melody but it’s nonetheless clear how much of a debt is owed to the original. However, something of that angularity is preserved in the astonishing harmonic twists that typify so many of Kreek’s settings: suspensions one doesn’t see coming; chords that appear to have slipped into a parallel world of tonality; progressions that suggest jazz and more modern harmonic contrivances. Here too, convention and caprice.

When i speak of smoothness, i guess what i’m really getting at is another of the qualities that makes Vox Clamantis the staggering vocal ensemble that they are. Not since the Hilliard Ensemble have i heard a group of individuals sing so convincingly as if they were but facets of a single voice. They move as one, separating and dividing as necessary but always returning to a place of absolutely seamless unity. Their intonation is perfect. An important part of the clarity in this recording comes from the location. i’ve usually heard Vox Clamantis sing in Tallinn’s grand Niguliste (St Nicholas) church, the acoustic of which drapes their voices in rich, extended reverberance. It’s always impressive, but just a few minutes’ walk away is Issanda Muutmise peakirik, the Church of the Transfiguration of our Lord, an Orthodox church with an altogether smaller, cleaner acoustic. This is where The Suspended Harp of Babel was recorded, and it enables Kreek’s musical language, and each and every one of the fifteen singers, to be heard with utmost transparency. Another important factor in this clarity are the tempi chosen by conductor Jaan-Eik Tulve. i’ve sometimes wondered whether the slow speeds Tulve adopts for Kreek’s music were as much to do with combatting reverb as with the music itself, but in the reverb-less space of the Transfiguration Church, Tulve actually takes many of the pieces even slower than usual, lending the performance the distinct sense of wanting to linger lovingly over each chord as long as possible before moving on to the next. Paabeli jõgede kaldail [By the rivers of Babylon], Kreek’s setting of Psalm 137, is an exception, pushed on a little quicker than i’ve previously heard it, adding urgency to the anguish at the heart of its agonised text. i’ve always found its alternation of heartache and hallelujahs to be powerful, and here it becomes very deeply moving.

Which brings me back to the words. As i’ve indicated, it’s possible – and, from time to time, desirable – to detach from their meanings to refocus attention more directly on the remarkable aspects of the music, but the nature of these texts is important. Regardless of what quantity, if any, of religious belief you entertain, to be listening to this disc during such troubling times worldwide gives added impetus not only to the despair but also to the hope captured in these words. When all else is lost, all that remains is hope – not a simple-minded, rose-tinted, “everything will be alright eventually” kind of thinking, but a faith in the capacity of humanity to keep going and provide mutual support to one another in times of deepest crisis. Cyrillus Kreek’s music – which, in case it’s not obvious from everything i’ve said thus far, has never sounded better than on this disc – powerfully advocates this, and the need for all of us, though we may feel our voices are broken or lost, to keep singing. It’s a reminder i confess i needed myself at the moment, and it’s one i suspect many others, especially musicians, need too. Whatever happens, in our own unique ways we must all – always, everywhere – continue to sing.

Released by ECM, The Suspended Harp of Babel is available on CD and download.

Well, I suppose Tubin came along a shade later…