In addition to purely electronic music, this year’s Estonian Music Days once again featured many works melding instrumental and electronic elements. The most potent collision of old and new technology came at the Arvo Pärt Centre on Saturday afternoon, where Anna-Liisa Eller’s kannel (the traditional Estonian instrument, a form of plucked zither) was combined with Taavi Kerikmäe’s huge battery of electronic devices. The repertoire was similarly ancient and modern, including two performances of John Dowland‘s Lachrimae (one on kannel, the other on (i think) a clavichord) and a rendition of a Louis Couperin prelude for kannel and theremin. Kerikmäe gave the theremin a vocal-like timbre, using it to delicately pick out individual notes from Eller’s beautifully intricate fingerwork, and leaving them to hang in the air like a descant made from lines of smoke. 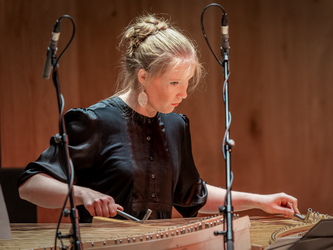 Giacinto Scelsi‘s 1976 work for “low instrument” Maknongan was performed twice. First, its undulations around a focal point became a sequence of electronic timbral variations, like a form of throat singing, rooted over a deep growling bass tone while higher pitches danced overhead; second, the kannel was made to grind and buzz, lending the work an extra layer of (barely-)implied violence. Helena Tulve‘s work Silmaja (beholder) exists in several versions: for solo kannel, three kannels (both composed in 2006) and kannel, harp and harpsichord (the latter two becoming Silmajad (beholders)). Eller and Kerikmäe gave the first performance of a new incarnation of the piece for kannel and electronics, and the fact that it was titled in the singular, Silmaja, indicates that the role of the electronics is secondary to the main focus on the instrument. This was borne out in the way Eller’s vigorous melodic fragments and embellishments were given only light electronic treatment, primarily in the form of filtering and reverb. While i’m not honestly sure the work as a whole benefitted greatly from this – the earlier versions seem a lot more convincing – it did nonetheless lend a touch of magic to Silmaja‘s evocative opulence (which both timbrally and materially brings to mind the koto in Japanese music). 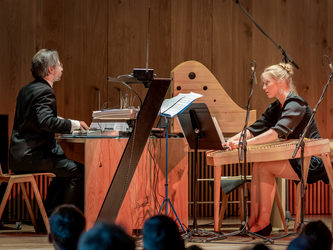 More engrossing was Elo Masing‘s Study in Entropy, also receiving its world première. The relationship between kannel and electronics was intimate and inseparable, the two unified in apparently grappling with a process that needed to be worked out, or through. There was a distinct sense of rigour in the way ideas cycled and remained focused, as if it were the real-time output of a problem-solving algorithm rendered as melodic and arpeggiated shapes. If that suggests cool detachment the music was actually hypnotically beautiful, and it was impossible not to become wholly immersed in and entranced by the increasing passion and playfulness of its internal dialogue. For a piece nominally concerned with analysis and science, it proved to be impressively warm and emotional. 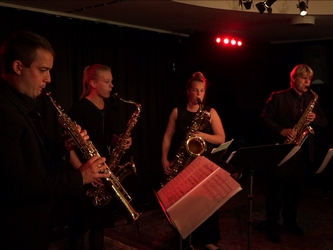 The electroacoustic work that made the deepest impression on me came at the end of a concert given by the Stockholm Saxophone Quartet, live-streamed from Sweden due to the group being unable to travel to Estonia. Us … and Them … is a new work for saxophone quartet and tape by Estonian composer Liisa Hirsch that takes its inspiration and many of the details of its shape and content from recordings of wolves. Its three movements were a lot more than simple imitations or recreations of animal sounds. If anything, Hirsch’s material did the opposite, removing the titular distinctions between animal and instrumental, animal and human, and also – most importantly – between the idea of non-musical and musical. 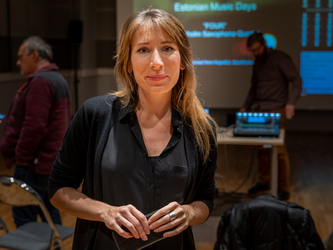 In fact, no recorded material appears until partway through the second movement, the first consisting of a near-unison chorus of high undulating tones that occasionally touched upon animalistic or bird-like gestural forms. When the sound of wolves finally entered, it was a heart-stopping moment, seamlessly emerging and morphing from a tantalising, highly focused saxophone sound object hovering in mid air. In this context, the wolves’ calls were heard for the music that they really are, a delirious, even ecstatic, sequence of heartfelt cries to the heavens borne aloft on a soft cloud of clusters from the quartet. Quite apart from being gorgeous it also felt deeply and unexpectedly moving. In the final movement Hirsch pushed all the material harder, matching juddering swells on the saxophones with forceful shouts and ululations from the wolves that uncannily sounded almost human. Though materially very different, the result was a strange kind of stasis, where despite the considerable amount of ‘action’ being heard in sound the music become a composite object slowly turning on its axis, ultimately dissipating in open air ambiance and a high unison tone from the saxophones. It was ravishing, and utterly mesmerising. 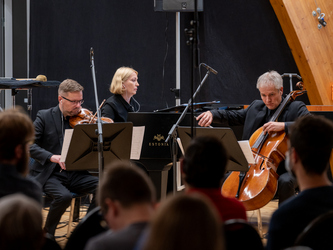 Comparatively little music at this year’s Estonian Music Days was entirely instrumental. One such event was a concert titled ‘Heavenly and earthly love stories’, given on Wednesday evening by the Estica wind quintet. Comprising unadventurous arrangements of assorted early music by Märt-Matis Lill, it was difficult to comprehend what place this had being included in a contemporary music festival. The main instrumental concert came on Sunday afternoon, given by YXUS Ensemble conducted by Kaspar Mänd, bring the festival to a close. Two of the four works premièred at that concert were especially striking. Helena Tulve‘s Emergence I. Flowering out of the dark for piano trio was one of the most intense things i heard during my time in Estonia. Tulve set up an environment so deeply melodic it was as if more than three instruments were playing, their tendrils wrapped tightly around each other. As is typical of Tulve’s work, all three players worked together throughout, though, again typically, this didn’t prevent the music from subsequently collapsing into tremulous fragments. i say collapse, but the disintegration of the material led to it transforming into filigree, almost becoming opulent before appearing to check itself and pulling back to plainer simplicity. In keeping with its title, the play of chiaroscuro in this piece was fascinating and sufficiently complex that it definitely requires further listens to appreciate more fully. 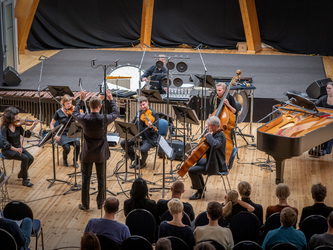 The highlight of the concert was also one of the largest pieces to be performed at this year’s chamber-focused festival, Toivo Tulev‘s White House, Blue Shutters – Blue House, White Shutters for string sextet, piano and percussion. The piece occupies a fantastical soundworld, a place combining energy and glitter, flitting between bursts of sprightliness and periods of reverie. In the first movement this manifested in an episodic structure though with a palpable sense of continuity, its continual shifts (some of them enormous) part of a larger, largely lyrical, narrative. Tulev upped the ante in the second movement, including a muscular double bass solo garnished with tam-tam and cymbal clatter that appeared to cause the rest of the ensemble, once they’d returned, to be less pushy than earlier, reducing to faint tremulous wisps. Tulev clearly didn’t want to allow one particular tone or mood to predominate, and the same applied (perhaps more than anywhere else) in the final movement. Initially brisk and punchy, the music lurched sideways resulting in pitches scraping like a train coming off its tracks, before righting itself in a sequence of assertive octave near-unisons. Whereupon everything turned inward and upward, the players handling their instruments gingerly, yet the music shone. It led to a nice topsy-turvy resolution that couldn’t quite connect until a lone violin stepped in, shivering into the stratosphere in such a way that, finally, everything aligned. i’ve used the word ‘immersive’ for a number of pieces at this year’s festival and that could not have been more true for White House, Blue Shutters – Blue House, White Shutters. We didn’t so much seem to be listening to it as inhabiting it.

All of the Estonian Music Days events i’ve discussed can be streamed online via Klassikaraadio, using the links below.