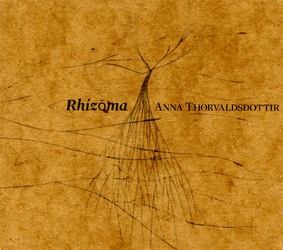 Something that comes up a lot in my writing about music is polarities. Perhaps it’s understandable; many composers strive to establish some kind of drama in their work, which often involves the juxtaposition and/or interplay of polarised types of material or behaviour. A lot of the satisfaction and enjoyment from listening to a composition and hearing it unfold comes from precisely this kind of polarised movement and play, regardless whether or not these opposing forces are balanced. i’ve recently been contemplating both the use of and – much more rare – the avoidance of such polarities in a couple of new portrait discs.

Rhízōma, featuring four relatively early works by Icelandic composer Anna Þorvaldsdóttir, was originally released by Innova way back in 2011. At some point in the intervening years the disc went out of print (and, as far as i know, wasn’t available digitally either), so it’s good news that, almost a decade on from its original release, the album is once again widely available, now on the Sono Luminus label. Before i say anything about the actual music, there’s a couple of things to be said about the aesthetic and technical aspects of this reissue. In terms of how it looks, Sono Luminus have retained the Innova design. The card digipak is darker and browner than the original, which hardly matters, though there’s a snafu on the letter ‘ō’ of the title (repeated on the CD) where the typography has glitched, using the wrong font. It’s such a glaring error that it’s surprising no-one spotted it before the CD went into production. Also, the pencil design running across the front and back – derived from Anna’s compositional sketches – is much fainter than the original, losing a lot of detail, which is unfortunate. But aside from this, everything else looks essentially the same.

In terms of how it sounds, Sono Luminus have handled the audio sensitively, remastering the reissue around 1.5 to 2dBs louder than the original, in the process bringing out a little more clarity overall (though the original was hardly unclear). However, they’ve also made the decision to change completely the audio of orchestral work Dreaming, replacing the original recording with the more recent one that was included on the Iceland Symphony Orchestra’s Recurrence album (also released by Sono Luminus). To my mind, this decision is both unnecessary and a mistake. Unnecessary because the newer recording, released in 2017, is readily available in both physical and digital formats and so doesn’t need to be included here. And a mistake because all music – and most especially contemporary music, so new in the world – thrives and grows from a multiplicity of interpretations. Removing the original performance of Dreaming therefore diminishes this possibility, and simply comes across as a crass marketing decision – Sono Luminus simply wanting to push their own recording – rather than an artistic one. It’s a real shame. That being said, more about this a bit later.

Let’s get back to polarities. Anna’s music is characterised by the presence of two fundamentally opposite types of material that i’ve previously described as ‘drone’ and ‘filigree’. The former comprises long sustained tones, often but by no means always in the bass, that act to underpin and/or ground the music for periods of time; the latter takes the form of tendrils of sound, usually located in higher registers, that are highly mobile. It’s not unreasonable (and Anna and i discussed this in some depth in the Dialogue that we recorded in late 2018) to think of these two types as loosely corresponding to a kind of ‘earth / fixed’ and ‘sky / freedom’ polarity. This polarity can be heard running throughout much of the music on Rhízōma.

In some respects it’s at its most simple and most complex in the five parts of Hidden (spread out throughout the disc), where percussion and grand piano each veer between dull thuds and pristine pitches. As such, the polarity is better characterised here as being between vagueness and clarity, perhaps nowhere more stark than in the second part, ‘Our’, where croaking scraped strings and deep pounding rumbles are countered by ultra-clear twanged notes and smaller, plucked melodic shapes. What connects the two players is reverberation – all the sounds we hear are allowed to resonate – and there’s something almost balletic about the way the two performers interact with one another. On the one hand there’s an inscrutability to this piece that’s somewhat unusual in Anna’s output (hence why i described it as complex), yet on the other hand the work has an immediacy that’s both inviting and reassuring.

The other three pieces on the album are orchestral. i’ve discussed Dreaming already when exploring the Recurrence disc back in 2017, so i won’t go over that again here, except to reiterate that not only is it one of Anna’s finest compositions but easily one of the best new orchestral works since the turn of the millennium. Hrím features something of an expansion of the polarisation heard in Hidden. Again there’s an emphasis on vagueness and clarity, though each pushed to greater extremes. The result is an engrossing back and forth giving the impression of a shape-shifting music, moving through episodes of textural turbulence (almost like the contents of a chrysalis) before emerging and hanging in the air as a more clearly-defined object comprising sustained pitches.

Composed in 2007, Streaming Arhythmia is the earliest piece featured on Rhízōma, and it displays a more nascent form of the polarity i outlined at the start. The caprice of its internal drama is fascinating and strange, with a tendency not to allow any particular idea to dominate for too long. There are instances of cause and effect – the most prominent being when sporadic accents early on manage to kickstart some powerful momentum – though more often than not the music recoils from such displays of energy, twisting spontaneously away in favour of a more inward, even introspective, mode of utterance. It’s as if a shroud had been thrown over the music: instruments group together in tight little clusters, or descend to form a thick throbbing miasma – but this only gives the more free elements more poignancy, especially when (around seven minutes in) these tiny tendrils become a kind of black, leaden hymn. This captures the essence of the polarity going on in this piece, where the ‘filigree’ (though it hardly qualifies as such) struggles to speak or even surface through the density and weight of the swamp-like everything around them. i’m not sure if any of Anna’s subsequent music has encapsulated such an intense mix of beauty, pain, aggression and calm; it’s really remarkable.

As far as the lost recording of Dreaming is concerned, all is not lost. Anna Þorvaldsdóttir has herself made the original 2011 version of Rhízōma available via Bandcamp. At 17½ minutes’ duration, it’s longer than the newer recording, but that’s not at all due simply to a slower approach. In fact, some of the work’s events happen earlier in the 17-minute version than the 15-minute one, though it’s nonetheless true that there’s a much stronger sense of taking time with the music in the older recording. It’s best to think of it not as a slower interpretation but a more elastic one, and there are many occasions when this teases out intricacies of detail that feel either sidelined or submerged in the brisker 2017 recording. In particular, around three minutes in there’s a much more palpable sense of magic, in terms of both glitter and the more ominous aspect hinted at in the depths. However, it’s fair to say that the 2017 recording captures a greater sense of power and force, so my recommendation (which, considering what i said at the start, will hardly be surprising) is to have both recordings, as they each contribute something to Dreaming that the other lacks.

The reissue of Rhízōma is available on CD and download from all the usual places. However, a note of caution: some digital outlets (such as Qobuz) have clearly been issued with the 2011 audio files by mistake. So make sure you know what you’re buying: if the duration of Dreaming is shown as 17:24, it’s the 2011 original version; if it’s 15:51 it’s the new version. And for anyone wanting to track down a new copy of the original 2011 Innova CD, it appears that ReR Megacorp amazingly still has some copies left in stock.

Ultimately, whatever version you buy and however you buy it, this album is absolutely essential.