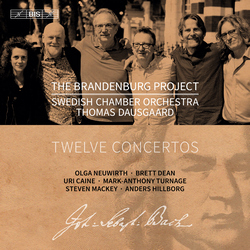 Three years ago, the Proms festival featured the first complete performance of The Brandenburg Project, a large-scale undertaking by the Swedish Chamber Orchestra, who commissioned six composers to write a work responding to one of J. S. Bach’s Brandenburg Concertos, with the aim that they should ideally also use the same instrumentation. Conducted by Thomas Dausgaard, these new works –  composed by Mark-Anthony Turnage, Steven Mackey, Anders Hillborg, Olga Neuwirth, Uri Caine and Brett Dean – were performed alongside the respective Bach concerto. In my lengthy critique of the Proms performance (surely one of the most ambitious contemporary music-related events that the festival has hosted in recent years), i was rather ambivalent about the project’s pros and cons, both conceptually – composers made to respond to earlier music yet again? really?! – and also musically, regarding both the relationship (if any) of the new works to the Bach in addition to their own intrinsic merits. It’s good, therefore, that the Swedish Chamber Orchestra and the original copious line-up of soloists (including Mahan Esfahani, Maya Beiser, Håkan Hardenberger, Sebastien Dube, Claire Chase and Tabea Zimmermann), again conducted by Dausgaard, has recently released the whole thing on a 3-disc set, providing an opportunity to reflect anew on The Brandenburg Project.

The most immediate observation to make is that the performance of the Brandenburgs is very much more polished and impressive than in 2018. Back then, many of them were scrappy and haphazard, an awkward, coming-apart-at-the-seams ensemble with more than a few wayward notes and tunings, seemingly a consequence of Dausgaard’s ultra-brisk tempi. Not surprisingly, (almost) all of those issues are gone in this new studio recording, and indeed, taken on its own terms the Swedish Chamber Orchestra’s performance of the Bach is extremely enjoyable and very convincing, full of exactly the right combination of swagger, light-footed intricacy and delicate introspection that makes these six concertos so wonderful.

Something i especially like is the way the details of Bach’s scores are made clear without becoming over-analytical. Surprisingly dissonant horns in the first movement of No. 1, followed by beautiful plangent lines in the Adagio, and such a brusque delivery of the final Menuet that it almost sounds like a snare drum is beating along. No. 2, which came seriously unstuck in 2018, is now tight and controlled, with a lovely switch from energy to intense lyricism at its centre, while No. 3 is taken very quickly indeed, but this only makes its unstoppable twists and turns all the more compelling. The flutes in No. 4 are mesmerising (again, this had been a mess at the Proms) with a glorious final Presto, whereas in No. 5, more than anywhere else, they genuinely begin to sound like a period orchestra. Dausgaard never allows the tempo to drag, creating a lovely gear shift for the slow movement – which really lives up to Bach’s instruction ‘Affetuoso’ – and a mischievously cheeky finale. No. 6 is practically turned into a game, all the more so after its lugubrious middle movement, with the soloists engaging in scampering polyphony, chasing each other, the orchestra shading the structural shape such that it palpably veers between strength and delicacy.

If it makes sense to consider the Bach on its own terms, what about the contemporary pieces? That’s really a question that dominates the Brandenburg Project as a whole, and while, in this respect, the results are still somewhat mixed, on the basis of this new recording the overall impression they make is a much more positive one, consolidating some of my earlier views but challenging others. In the case of Stephen Mackey‘s Triceros, i originally concluded that it was “Hard to dislike, but even harder to take seriously”. Unfortunately, i now found myself disliking it a whole lot more, increasingly frustrated by its simplistic, primary colours form of playfulness and rather tiringly incessant brand of energy. It tends to convey the impression of music that’s essentially basic in character but which Mackey has sought to render askew through a combination of harmonic colouration and energetic intensity. Regardless, it leaves one feeling thoroughly hollow at its conclusion – weirdly bolting on a portion of Brandenburg 2, for no apparent reason other than that Triceros is supposedly a response to it – all the more so alongside the other five contemporary works.

Anders Hillborg‘s Bach Materia, on the other hand, makes a much stronger impression here than it did in 2018. Where some of the composers keep their distance from the Bach, Hillborg embraces it, first through glistening half-glimpses (which cause a frantic reaction) before indulging in quasi-direct quotations. The way these veer off is nicely spunky and irreverent, encroaching on jazz – walking bass and scat(!) – while, later, taking it into more remote territory, evoking Hillborg’s earlier work exploring vast, textural landscapes. There’s a deep, tangible connection to Brandenburg 3 throughout Bach Materia, and in this beautifully vivid performance it sits superbly alongside it.

Perhaps the most wilfully unengaged of the six is Mark-Anthony Turnage, whose Maya betrays essentially no meaningful connection to its supposed stimulus, Brandenburg 1. Three years ago i described the piece as “not so much a reply as a riposte”, and it still sounds as though Turnage is determined to avoid confronting Bach as much as possible. There is, perhaps, something of an evocation of the basis for The Brandenburg Project – combining new and old – heard in the work’s opening, an atmosphere of hovering darkness that suggests viols (ancient) playing behind the solo cello (modern – or, at least, less ancient). If anything, the piece brings to mind Shostakovich’s Cello Concerto No. 2 more than it does Bach, yet while that makes it problematic within the current project, taken on its own terms it’s hard to quibble with the power of its musical language. There’s a fragility to the material that, even when it becomes more passionate, never moves far from delicacy, heard most starkly in the solo passage halfway through, less a cadenza than a quiet rumination on things. It’s a beautiful and immersive piece, though, as i say, it’s hard to make sense of its role or place within the wider Bach project. i previously noted that it has the demeanour of Brandenburg 1’s melancholic middle movement, but i can’t help feeling that’s grasping at straws. Whether that matters is debatable; but for all the work’s merits, its presence does seem rather strange.

In his fittingly-named Approach, Brett Dean uniquely comes at the Bach from in front rather than behind. As with the Hillborg, i found myself convinced in this recording by aspects that left me unimpressed following the Proms performance. It seems to me that Approach, structured as a small-scale, conventional fast-slow-fast concerto, acts as an exploration of more amorphous ‘stuff’ that then finds true clarity and organisation in the Bach. Dean’s opening movement, for example, marked “Allegro impetuoso, volatile”, is concerned with velocity and energy rather than detail, with specifics of pitch being of much lesser importance than their constancy and behaviour. Everything that follows is similarly nebulous with regard to surface detail, moving from exuberant, rapid-fire shapes to dense grindings and shivers during its slow movement. There’s a fascinating moment towards the end of this when a low tremolando becomes clarified into chord progressions and the melody simplifies – it’s a tantalising, momentary bringing into focus that hints at where Approach is ultimately headed. Where i originally found the last movement meandering, now it seems much more clear in terms of its harpsichord-propelled makings of momentum setting up for Brandenburg 6.

What these recordings have consolidated most, though, is the dazzling success of the remaining two new works, Olga Neuwirth‘s Aello – ballet mécanomorphe and Uri Caine‘s Hamsa. In both cases, it makes less sense to talk about them in detail (though i did in my original review) than simply to go along for their respective deliriously joyous rides. In the Neuwirth, everything sounds fundamentally connected to Brandenburg 4 but hugely distorted, elaborated, extended, embellished and otherwise (man)handled and (mis)treated. Neuwirth’s trusty typewriter (which features in a number of her works) makes its presence felt here, and in the midst of such mayhem Aello‘s switch to ethereality in the central movement – filled with shimmering, floating notes – is unexpectedly and stunningly beautiful.

With Hamsa, Caine has created one of most insanely jubilant compositions i’ve ever heard, and also one of the most downright bonkers. Though it seems to be at first, Hamsa is no mere mash-up of Bach-like gestures and fragments, simply throwing them around or mucking about with them recklessly, but an altogether more cohesive chop-and-change environment rooted in an attitude of pure play. Indeed, its unpredictability attains unity through the continuity and interconnections of its plethora of allusory threads and motifs: it’s always abundantly clear what’s the impetus for Caine’s material, in what comes across as the most ebullient form of homage. More than any of the other composers, Caine stares at Bach in the face, always directly and emphatically responding to his material while remaining personal, unique and original. Its madness is utterly infectious, always remaining accessible despite being such a strange melée of wonders, somehow melding Hamsa into a just-about-coherent whole. It really needs to be heard to be believed.

Released by BIS, The Brandenburg Project is available as a 3-SACD box set and on digital.

[…] Australian composer Brett Dean was exploring his response to the music of J. S. Bach, as part of The Brandenburg Project. This time it’s Beethoven’s music that Dean is responding to, in his orchestral work […]