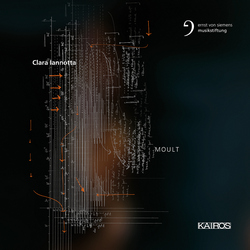 What’s the difference between consistency and tautology? It’s a question i’ve returned to repeatedly over the last few years primarily in relation to the music of both Rebecca Saunders and Autechre, and it seems to be pertinent to Clara Iannotta as well. Last year, when exploring the previous album of Iannotta’s music, Earthing – hands down one of the best things i heard all year – i wrote about hearing the four pieces as movements of a hypothetical symphony, since “what unites them is overwhelmingly more obvious and significant than what sets them apart … linked by a coherent, shared musical language, with elements of overlap, recapitulation and synthesis”. More recently, as i’ve been spending time with MOULT, the latest disc of Iannotta’s music – which again features four works – i’ve again been struck by their similarities and interconnectedness. Here too, as a consequence (though no doubt not at all what the composer intends), it’s difficult not to hear the album as a single compositional entity, though this time the overall effect seems less symphonic than variations on a theme.

While it concomitantly follows that the distinctions between the pieces is therefore reduced, i don’t consider this as a negative aspect. Not at all – and it’s worth qualifying at this stage that, as with Saunders and Autechre, i don’t regard the possibility of tautology as being problematic either. At least, not when the results are a stunningly original as they are in Iannotta’s case. Due to their similarities, it makes more sense to speak generally about the music than to go into detail about each work separately. Indeed, “detail” is an interesting concept in this music, since if ever a composer could be described as being preoccupied with manipulating nebulous forms of matter, it’s Iannotta.

That being said, throughout these pieces there’s a delicate balance being struck between the vagueness caused by this nebulosity and instances of certainty, either in the form of concrete sounds, gestures and ideas being given (at least some) prominence or through larger-scale en masse assertions. There’s something quite polarising about this balance, to the extent that the more certain elements are not only highly noticeable in context, but also highly memorable afterwards. Something as simple as a repeating piano note becomes a sonic entity of huge significance; in the title work it appears both early and late in the midst of considerable apparent energy, yet seemingly untouched and untroubled by it, whereas in paw-marks in wet cement (ii) it operates in a more rhythmic way as just one among many clunking impacts in a largely intangible environment. Another recurring feature is the presence of ratchet-like rattling, which tends to form part of an apparent reaction to, and / or aftermath of, various violent catalytic actions. In MOULT it unexpectedly appears during the coda; in paw-marks it comes in the wake of angry swells; in Troglodyte Angels Clank By it’s heard in response to a series of heavy accents; while in dead wasps in the jam-jar (ii) we glimpse it within a sequence morphing from intensely muscular movement into a network of clatter playing out over low drones.

This balance that Iannotta strikes in these pieces is effective enough, but the more vague episodes are arguably more mesmerising than anything else. Hers is among the quietest truly avant-garde music you’re likely to encounter, and sometimes here it’s as if the players had decided to turn inward and play just to themselves, lurking at the periphery or, at best, in the middle distance. But in general the vagueness in these pieces is not due to quietude but to the density and complexity of Iannotta’s textures, where no sound or gesture seems unimportant yet few (if any) of them are overtly discernible in their own right, the ear latching onto something for the briefest of moments before it’s lost in the melee. It’s akin to something i wrote about Earthing, making “all of those inner details … both ultra important and ultra irrelevant. Important, insofar as our ear is drawn towards, gripped by, each one as it appears (sometimes erroneously) to be coming into existence; irrelevant, as each one is just a part of – almost a symptom or by-product of – a much bigger and longer-term process of behavioural agitation”.

Perhaps the most striking recurring feature – especially potent in the context of such amorphous sound forms – is the presence of clear pitches. Whether they’re buried in the texture as bands of shimmering clarity or protruding from them like shafts of light, they’re one of the few aspects of this music that almost always sounds demonstrative. At times it could hardly be more obvious, nowhere more so than in the immense climax to dead wasps, a harsh surge that ends up as an enormous mess of piercing and wobbling tones. But in more sedate forms they’re no less telling: soft incandescence hovering after an early onslaught in MOULT; effortlessly emerging through the restless chuntering surface of paw-marks; acting like a kind of (sometimes implied) omnipresence in Troglodyte Angels Clank By; and at the start and end of dead wasps, culminating in a mixture of simple and complex chords.

As in all of Clara Iannotta’s work, this is music that sounds utterly organic, forming and evolving in real-time according to its own inner conceptions of idea, narrative and development. The way its aspects are shared, imitated and replicated only makes these four works more engaging, establishing another delicate balance between their inviting soundworld and their ostensibly confusing contents. Yet bewilderment rarely feels as exciting as this.

Released late last month by Kairos, MOULT is available on CD and download.