Not everything i heard at Ultima 2021 was bound up in convolutions of meaning. Ryoji Ikeda‘s forays into the world of percussion (which i previously explored in 2018) are a sidestep away from his more central work in multi-layered representations and interpretations of data, instead concerned much more directly with sound as sound. His 2019 piece 100 Cymbals consists of a 10×10 arrangement played by 10 performers. Essentially a texture study, over the course of its 40-minute duration the players moved around the space of Oslo’s Black Box Theatre from cymbal to cymbal – playing either one or two at a time – in the process forming different visual and sonic configurations. 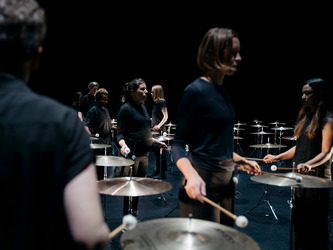 Unexpectedly, it began not with noise but a surprising amount of pitch, the cymbals being manipulated with superball mallets. These shifted as the players moved around, causing the bands and colours of pitch to evolve, rise and fall. This subsequently morphed into a nebulous column of soft noise as the players switched to tremolandi. i couldn’t tell if the effect was real or imagined but when the players turned away from us the combined effect seemed to darken, even though the cymbals weren’t being actively obscured in any way. It was just one of a number of strange effects and possible illusions that emerged during the slow development of the piece, another being the way certain pitches would appear to cut through the noise clouds, even sometimes appearing to form a vague kind of chord – again, it was impossible to tell if this was actually happening and also where these possibly mythical pitches were actually coming from.

i’m not sure 100 Cymbals entirely lived up to its potential – the emphasis on tremolando, after the more pitch-focused opening, felt a little underwhelming and limited over time – but it’s nonetheless testament to Ikeda’s ongoing fascination with the possibilities of choreographed sound, and the performance by the Pinquins Percussion Extended Ensemble (by necessity, performing from memory) was flawless. 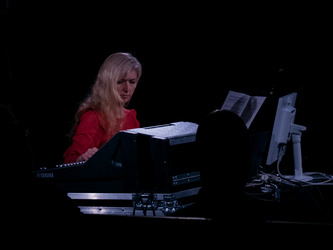 Music that tapped more directly, and powerfully, into the possibilities of sound as sound was Natasha Barrett‘s new work for organ and electronics, Where Shockwaves Become Sound. Considering the extremes that have always manifested in Barrett’s work, this title was a startling prospect in itself. Not only did it not disappoint, it also highlighted the curious resemblance that the organ has to the world of electronics, able to harness the highest and lowest registers and project them with enormous force. i’m still coming to terms with exactly what i heard during the performance in Oslo Cathedral (as with all Barrett’s music, multiple listens are necessary even to begin to grasp all of its subtleties), but it was unequivocally elemental. Huge throbbing pulses, tangled messes of filigree, massive crashing clusters, all of this blurring where the organ ended and Barrett’s electronics began, at times suggesting imitation or ideas being passed between the two, but in such a seamless way it was impossible to disentangle. 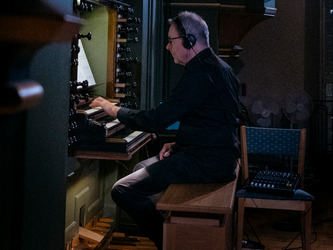 Uniquely in Barrett’s output, this was a piece fundamentally concerned not with the physical landscape but the social one, addressing aspects of disinformation within contemporary culture. The elemental power in her music thus became a metaphor for the forces that disrupt and rupture society, matched by lengthy periods of delicacy that in this context seemed unsettling, their quietness only partially masking the sharpness of the tones. Glitter and beauty became messed up, regained their composure before a menacing acceleration propelled everything towards a practically inaudible conclusion, ending somewhere simultaneously abyssal and stratospheric.

This stunning performance was followed by two shorter, purely electronic, works diffused by Barrett’s EAU partner Anders Tveit. One of these, Morton Subotnick‘s 1968 The Wild Bull (part 1), came across as dynamically flat in Tveit’s performance, somewhat minimising the impact of its avant lyricism, cavorting eruptions and bass line fixations. The conclusion was lovely, though, turning mysterious and elusive, leaving soft sighs hanging in the darkened cavernous space. By contrast, Joel Chadabe‘s 1968 Blues Mix could hardly have sounded more new and vibrant, an utterly joyful demonstration of pure play, like sound turned into a sticky liquid and liberally thrown around, coming apart, reforming, the material itself seemingly alive, positively bristling with energy as it danced and whirled around the centre of the cathedral.

Earlier in the week we heard two other examples of early electronic music by Éliane Radigue and Lily Greenham. While Radigue’s Stress Osaka, focusing on a textural exploration of tiny speech fragments, was of only passing interest, Greenham’s 1975 Traffic was altogether more immersive. Juddering, fluctuating bass, subsequently embellished with sirens, developed into a parallel of the cumulative effect of traffic in which the work could be heard as a saturation, in which all its noises had been superimposed to create a polarised vague droning throb with cycling alarms. 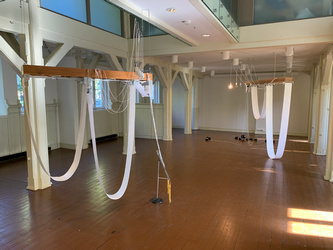 A study of real-world effects at the opposite end of the saturation spectrum was demonstrated in Yuko Mohri‘s installation piece I/O, in a new version for Oslo housed in the city’s Atelier Nord. Its two main machines are designed to respond to delicate fluctuations in light and dust particles, measurements that are converted into data signals that cause physical actions in its connected paraphernalia, including hanging reels of paper, rows of light bulbs, a glockenspiel and a collection of something akin to animal tails attached to motors.

Like so many installations of this ilk, it was a lot less profound than the artist would like us to believe, but in spite of that it was undeniably interesting to see the randomness and indifference of the real world manifesting in such a weird and impish fashion.