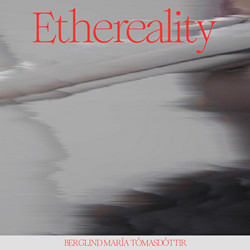 The other recent release of Icelandic music that i’ve been spending time with lately is Ethereality, by flautist Berglind María Tómasdóttir (whose Icelandic Flute Music album i explored at the start of the year). When writing about Anna Thorvaldsdottir’s Enigma i commented on the way the distinction between the different movements was arguably negligible in the context of the work as a whole, and in a similar way it’s easy to listen to the six different pieces on this album and hear them not as distinct compositions in their own right, but as a movements of a single, overarching musical structure that is Ethereality. That’s not to suggest there’s anything deficient in these pieces, not at all, simply that this album is a more than usually cohesive act of curation.

Ethereality is an electroacoustic journey, but that’s only hinted at in Stomachs of Ravens by US composer Carolyn Chen. It acts as something of an overture, developing from a mixture of tiny gestures and slapped notes into a more full-bodied melody. The way that Chen emphasises the tonic note E, coupled with a pervading sense of (real and / or electronically-enhanced) reverb, lends this line something of a chant-like quality, albeit one that’s energised, culminating in highly repetitive lurching and looping. Berglind María Tómasdóttir‘s own work Bambaló continues this melodic strain but with a greater sense of intimacy, lacking any reverb, focusing in on the flute in a way that’s more expansive yet internalised. The delicacy of the line is convoluted via simultaneous singing, causing it to vibrate and buzz, creating a strange atmosphere that’s simultaneously restful and restive.

The tone abruptly changes with Lilja María Ásmundsdóttir‘s og brenna eins og fuglinn inn í eilífðina… (“and burn like a bird into eternity…”): an immediate electronic presence heard in a low rumble and a collection of hard-to-discern (possibly animal) sounds. These form the backdrop to a moody flute part that’s if anything more elusive than in Bambaló, making tentative intrusions into this passive ambient space. It’s tempting to regard it as a steady state, as it settles into an essentially unchanging behaviour in which the flute sits in the foreground, with vague shapes sporadically heard in the middle distance while the far-off ambiance continues unaffected by anything else. Some might find it too inert for its own good, but time and repeated listenings have proved it to be surprisingly engaging, throwing a spotlight on the highly active flute occupying a passive space. 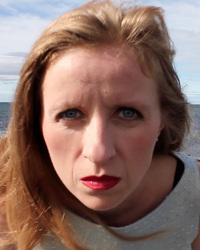 The outlook turns inward again in Tryggvi M. Baldvinsson‘s Riposo, a short, flute-only piece that unfolds a soft, steady lyrical line that, at its apogee, transcends into a coda of high whistle tones. It serves as an interlude after which something of the environment of og brenna eins og fuglinn inn í eilífðina… returns in Anna Thorvaldsdottir‘s Ethereality, the flute back in the centre of a gentle electronic habitat characterised by bands of monochromatic wind. The instrument explores a low, by turns buzzy and whistling line punctuated by overtly dramatic flourishes; these flourishes emphasise how restrained, even muted the flute is for the most part, a behaviour that subsequently becomes locked into a hovering stasis for the final third of the piece, as if time had suddenly been massively slowed down.

This sense of ostensible inactivity is extended in the final work on the album, which is also the most obviously electronic. Shut Open by Clint McCallum is a complex, completely immersive soundscape that from the outset encloses us in a warm, viscous, gently pulsating environment. Somewhere within this are traces of flute, sometimes so far off it’s little more than an allusive whiff, other times practically next to us though, even here, laden with timbral ambiguities, obscuring its identity. It’s the kind of soundworld of which Deathprod would be proud: profoundly dark, infinitely deep, filled with nebulous, active stuff while simultaneously bobbing, floating and cycling as if caught in a large loop.

Yet over time magic ensues: the texture lightens, in terms of density, clarity and register. Individual pitches start to emerge, lone focal points that seem almost impossibly tangible in this context. The effect is marked, leading to a surge in intensity focusing on an increasingly small band of noise that almost-but-not-quite gives the faint impression of a triad. This hovers in space for a long time before abyssal tones move and slide to create a conclusion that, for all its apparent breadth and scale, feels surprisingly fragile and intimate.

It’s a gorgeous conclusion to a compelling 54-minute cycle that veers between extremes of scope and poles of acoustic and electronic emphasis. More than most, Ethereality isn’t an album for cherry-picking; it really needs to be heard in its entirety for the best and fullest effect.

Self-released in August, Ethereality is available as a download from Berglind María Tómasdóttir’s Bandcamp site. Videos of several of the pieces can also be viewed on her website.